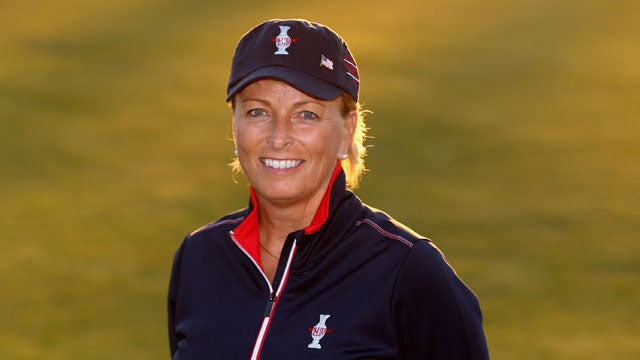 That doesn’t make her the next Feherty.

“There’s no replacing Feherty,” Pepper said from her home in upstate New York. “Here’s what I told the guys when I went to CBS to meet with them. I am not funny. But I will work really hard. So there you go.”

Pepper first rose to prominence as the most prominent female golf analyst at NBC Sports from 2004 until 2012, when she stepped away to reduce her travel schedule. Pepper joined the board of directors at the PGA of America. That term expires next month.

And that essentially made Pepper available.

“Once it became evident that we weren’t going to do our deal with Feherty, Dottie was the first and only analyst we considered for the job,” McManus said. “Everyone we asked about Dottie, including the folks at ESPN, just raved about her work ethic.”

Pepper feels another void at CBS, which had been the lone network to not have a female. NBC had Pepper for nearly a decade, and ABC Sports (and ESPN) featured Judy Rankin when it still was involved in PGA Tour coverage.

“We didn’t hire Dottie because she’s a woman,” McManus said. “We had been considering for a long time adding a woman to our crew, and this turned out to be perfect.”

Pepper will make her debut with CBS for its weekend coverage of the Farmers Insurance Open at Torrey Pines on Jan. 30. She knows all the golf courses that CBS covers on the West Coast Swing from her days at NBC – Torrey Pines and Pebble Beach held U.S. Opens, and NBC had Riviera during an Olympics year.

Pepper has been at the Masters the last few years with ESPN, and the other major she will work is the PGA Championship.

“A microphone doesn’t know whether you’re male or female,” Pepper said. “It knows whether you can call a good shot or a bad shot and relay what a player is thinking because you’ve been there. I’ve thrown up on myself and I’ve gotten the job done, so I know what it feels like to be in that position.”

Pepper was a 17-time winner on the LPGA Tour, won two majors and was never more fiery than at the Solheim Cup.

She will remain at ESPN in its limited golf coverage. McManus said Pepper still had time on her ESPN contract, and that John Wildhack (executive vice president of production and programming) and Mike McQuade (vice president of golf production) were “terrific in letting her sign an agreement with CBS.”

So much for that reduced travel schedule.

Pepper said she likely would be at 20 tournaments. McManus said her role would be an on-course reporter and occasional time in the booth.

“When I went to ESPN, I had the perfect workload,” Pepper said. “But the whole landscape of TV has changed. More than that, after being away from a ton of live golf, I realized the boardroom is not my space. I love to talk about live golf. It’s the coolest thing to get back to that.”