Why the U.S. Army used to test heavy artillery at this week’s PGA Tour venue 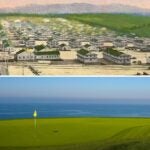 When Rory McIlroy unleashes a tee shot at this week’s Farmers Insurance Open, there’s a good chance someone on CBS’s broadcast team will call it an absolute missile.

Heavy artillery, they might say. That driver of his — it’s a real weapon.

But long before McIlroy was born and decades before local favorite Phil Mickelson spoke of hitting bombs, Torrey Pines Golf Course served as the site for an entirely different, far less figurative type of weapons testing. During World War II, the land that would eventually host major championships was a heavy artillery training facility for the U.S. Army called Camp Callan.

After the War Department leased the land from the city of San Diego, construction on Camp Callan began in November 1940. Initially, the training center’s purpose was to teach trainees how to shoot a variety long-range weapons in case the Japanese decided to attack the United States’ western coast by either air or sea.

By early 1941, personnel moved in and began to live and train at the base. Large guns arrived just a month later, and thousands of trainees followed, arriving from camps all over the country. In their leisure time, they played a number of sports, including baseball, basketball, swimming and yes, golf — though they didn’t have any sort of complete course.

In 1942, the camp began its period of peak activity. Leadership decided, based on the damage the German air force — the Luftwaffe — had inflicted on the U.K., that their focus should be on anti-aircraft weapons; relatively speaking, any seacoast attack would represent a lesser threat.

“Camp Callan trains antiaircraft artillerymen,” read one pamphlet sent to families in 1943. “These are the men who will defend the skies for America on every battle front.”

Ten thousand or more trainees would occupy the camp at any given time, going through 13-week training cycles and learning to operate a wide variety of weaponry, from pistols to automatic weapons to anti-aircraft artillery.

The number of structures at the base grew significantly over this period, including living quarters, post offices, movie theaters, chapels and more. The camp was a small city of sorts. It even had a newspaper called — wait for it — The Range Finder. Foreshadowing indeed.

In the summer of 1944, the base’s mission changed again. The anti-aircraft training program, which had become the camp’s main focus, was transferred to Fort Bliss, Tex. For a short time, Camp Callan shifted to training soldiers for overseas amphibious attacks. But when the war ended in the summer of 1945, the camp was soon declared surplus.

Abandoned army bases can turn into any number of things, but the bustling municipality of Camp Callan disappeared even more quickly than it had sprung up. Southern California was short on building materials at the time, so the city of San Diego reacquired the camp’s land plus its structures and facilities for $200,000 and resold most of the materials to veterans and citizens at a reasonable price. The demand for those raw products was so intense that the city quickly turned a profit on its investment.

In the decades that followed, the camp’s footprint split into a number of things. The southern section became part of UC-San Diego’s campus, while the northern section turned into research facilities, hotels, office buildings and a particularly scenic stretch that was restored as a state preserve — and after a few years as a race course for automobiles (another story for another time) it became a 36-hole world-class golf facility and home to one of the world’s finest municipally-owned courses.

There isn’t much evidence of Camp Callan left these days. But what was the camp’s main entrance is now at The Lodge at Torrey Pines, which overlooks the 18th green and 1st tee of the South Course. So when you watch the missiles fly this week, it’s worth remembering not even McIlroy’s driver could take down an enemy aircraft.