Three Farms sits on a 60-acre estate on the East End of Long Island.

Ed. note: This is Part II of Michael Bamberger’s three-part ode to nine-hole golf. You may read Part I here.

My friend Rees Jones, the golf-course architect, has had some interesting projects over the years, across the country and across the world, backed by some interesting clients. He’s done resort courses, country-club courses, public courses, and some of the land tracts have been pretty, pretty big. In China, the golf-course developers aren’t worried about 10 acres here and 20 acres there. It’s a land-rich country.

But one of Rees’ most interesting projects, over the course of his long career, required him to work in a far more intimate scale. About 30 years ago, a New York businessman named Edward S. Gordon asked Jones to build him a nine-hole golf course in his Long Island backyard.

OK, not your everyday backyard. Gordon owned a 60-acre estate in Water Mill — in the town of Southampton, in Suffolk County — called Three Ponds Farm. The estate was (and is) across a country lane from a golf course, the Atlantic Golf Club, that Gordon helped start and Jones designed.

Gordon was a New Yorker’s New Yorker and a real-estate legend. When he died in 2000 at age 65 (colon cancer), his family took out a full-page ad in the New York Times featuring Gordon, the Manhattan skyline and the words, “Thank you, New York, for a wonderful life.” His Times obit noted that he used his backyard nine-hole golf course to close deals.

Well, all these years later another self-made New York real-estate mogul, Ivan Kaufman, is now the owner of Three Ponds Farm and the Rees Jones course on it. He bought it in 2019, and Kaufman brought Rees back to the estate course for a makeover. Don’t call it a nine-holer anymore. As Kaufman and Jones are happy to tell you, it’s now an 18-hole course. Yes, an 18-hole course on 60 acres. It’s not the accounting that’s creative. It’s the use of the land.

On a nine-hole course, Kaufman told me, you go around twice if you want to get in 18 holes. At the K Club at Three Ponds Farm, there’s none of that. Through inventive use of its teeing areas, fairways, greens and the holes cut on them — along with some changes in direction — you actually play 18 unique holes by the time you’re done.

And by the time you count your steps and your strokes, you have played a 6,400-yard, par-71 course that is maintained to private-club standards and then some. “We overlaid the new course on the existing course,” said Kaufman, who bought the estate from the Gordon family in 2019. “I think it’s unique.”

Oh, it’s unique, all right. Rees has seen hundreds if not thousands of golf courses in his day. He’ll tell you that the K Club at Three Ponds Farm is one of a kind. It’s not just the snugness of the property, but the elevated tees, the rolling terrain, the broad bunkering, the swooping greens. It’s as real as any golf course you would hope to play.

Kaufman is not looking to close deals on his course but he does want to find ways to use the course for charity outings. He has mapped-out a 12-hole short course on his course that he says would be suitable for all skill levels, thereby making a day of charity fundraising on a golf course more realistic for more people.

It’s as real as any golf course you would hope to play. 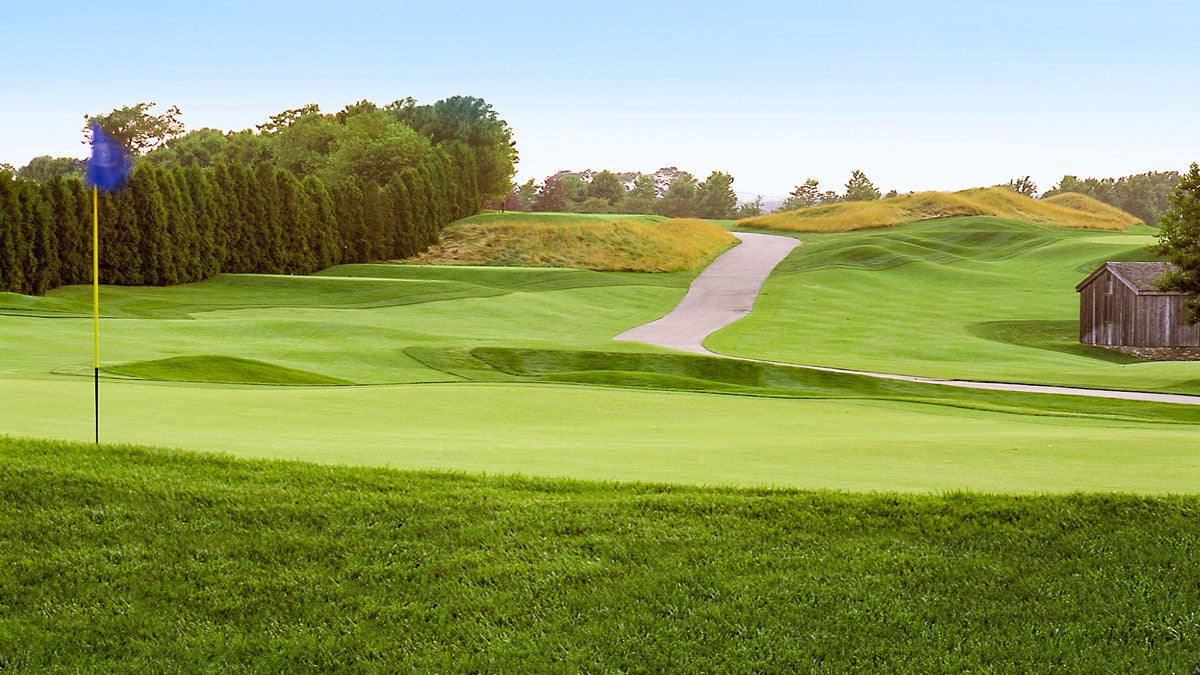 Rees and I played it on a warm summer day and had ourselves a good time. And let me say this about Rees: you’d be hard-pressed to find a more companionable playing partner, or one who takes more pleasure from your good shots.

Rees grew up in Montclair, N.J., played golf at Yale and worked for his father, Robert Trent Jones, before going out on his own. Early in his career, Jones the father and Jones the son did renovation work at Bellport, a modest Seth Raynor municipal course about 30 miles from Southampton. This was in the 1960s. They took two par-3s and combined them to create a bayfront cape hole that looks to be 100 years old. It was the seventh when I first started playing it in the mid-1970s but today is Bellport’s 15th, after a rerouting.

Rees and his wife, Susan, have a summer home in East Hampton — “on the wrong side of the tracks,” he wryly notes — and Rees knows what I know: that Suffolk County, Long Island’s eastern county, is a golfing heaven.

I was lucky to grow up there. Everybody knows about Shinnecock Hills. I’ve probably written too much about Bellport (but it’s home). Fewer people know about course at Three Ponds Farm.

Some long months after I played it, Ivan Kaufman and I were comparing golf notes and other notes. Kaufman started his first business while in law school at Hofstra and had 250 employees before he graduated. He took up golf in earnest only at age 40, but when the bug bit it bit hard, and 20 years later the game, and his backyard course, is beyond a preoccupation. It’s also a way for him to spend time with his grown son, Maurice, who is a scratch golfer.

I told Kaufman about growing up in Patchogue and playing golf one town over, in Bellport.

“Patchogue?” Kaufman said. It’s a small, self-contained village, on a bay with a working main street. “I spent a lot of weekends with friends in Patchogue.”

And then we went down that rabbit hole. Within a few minutes, we realized that we played Saturday-afternoon football together (or against one another) in Patchogue. No uniforms, no cleats, no officials. No adult supervision. Just pickup touch games at Roger’s house, in his long rectangle of a backyard. Small world!

That was a long time ago, long before Ivan Kaufman or I took up golf, long before he expanded the idea of backyard sporting fun. But if he wanted to play football at Three Ponds Farm, there’s plenty of room for that.