What is a Cape Hole, plus figuring out how to best attack one 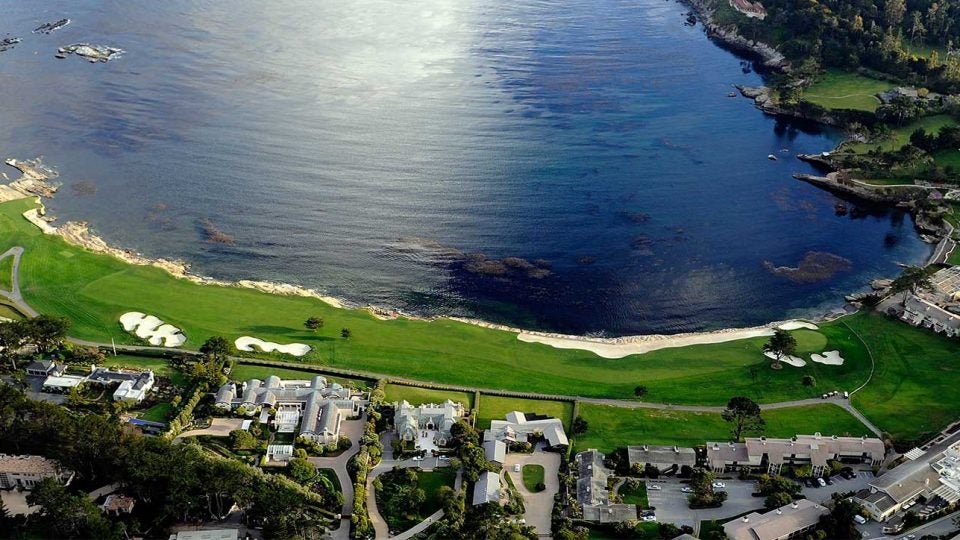 Welcome to A Beginner’s Guide to Golf Course Design, where we’ll dig into the history, design and meaning of golf course architecture terms you’ve probably heard before but might not fully understand. We’ll explain all of the above in an accessible Q&A format, and better yet, teach you how to identify these features and plan your attack for the next time you see one, saving you strokes along the way. In this installment, we’re breaking down cape holes.

Well, no. When C.B. Macdonald was designing the first cape, he had the other definition in mind — a piece of land that extends out and is surrounded by water on three sides. Over time, the definition of a cape template hole has changed quite a bit, but it remains one of the most strategically intriguing holes in golf. The decision-making required often makes a course’s Cape Hole the most feared. Let’s see if we can find a way to make it a bit less daunting.

When do I know I’m on a Cape Hole?

Several features make up a cape hole, though there is disagreement over which are most necessary or important. Macdonald did not take his design from one specific hole (though the second at North Berwick might have been a big influence) – his 14th hole at National Golf Links of America was mostly an original. “The 14th hole at the National Golf Links is called the Cape Hole, because the green extends out into the sea with which it is surrounded upon three sides,” Macdonald said. This is all a cape meant at first, and many architecture purists want the definition to stay this way.

But over time, other elements have been added to the cape template. Most consider the modern cape to involve a risk/reward tee shot with a carry over a hazard, usually water. The approach shot uses the same hazard as the tee shot, and the water usually surrounds the green as well. The hazard often runs along the side of the entire hole, with the green raised above it.

A common feature is for the tee box to be set off to the side, so the player has to decide how difficult or severe of an angle they are willing to take. The longer the carry, the closer and easier of a second shot you will have. But if you come up short, the penalty can lead to a large number.

Travel
What is a Redan hole, plus how identifying one can help your game

How should I play it if I see one?

On the best cape holes, you will be forced to hit over water on the tee shot and then again on the approach. The hole was not initially intended to be all about the risk of the tee shot – the shot into the green is just as important. The risk/reward tee shot might not have even been part of Macdonald’s original concept for the hole, though it is a popular element today.

Because of the curving nature of the hole, the direct line from the tee to the green can make it feel deceivingly short. Seeing the green not that far away can lead to a feeling of ease, but the actual line of play makes cape holes play much longer.

Many golf architecture purists argue that for a hole to truly be considered a cape, the green must extend out into the hazard like the actual definition of “cape.” Over time, the cape template has become just as synonymous with the risk/reward, bite-off-as-much-as-you-can chew tee shot. While this element is full of strategy, something is lost in the tactic of the second shot when the green is not surrounded on three sides by a hazard. With this, players would have to hit a carry shot over a hazard on not just their first shot, but their second as well. This means the hole becomes a complicated equation. How much are you willing to risk on the first shot to have a shorter second shot? And not just so you have a shorter iron for your approach, but also to make sure you can carry the hazard a second time. Playing a safe tee shot now makes your second shot infinitely more difficult.

The cape is a fantastic template hole in part because of its simplicity. The options are easy to understand. Hit it as far up as you can without finding the water or other hazard, or the punishment will be severe. Play it too far back, and your approach shot is no picnic. Just remember that finding the fairway, even if it’s slightly farther back, is likely to keep your score down, or at least take that penalty shot out of play. But the heroic feeling of flying the ball way over a hazard is often worth the risk.

Where are some famous examples? Do the pros play any?

14th at National Golf Links of America (the original)

The 14th at National Golf Links of America has changed over time, though still plays quite short, with a severe left-to-right sloping fairway. This only makes the approach shot to the green more difficult, as the ball is below the feet of the right-handed golfer. 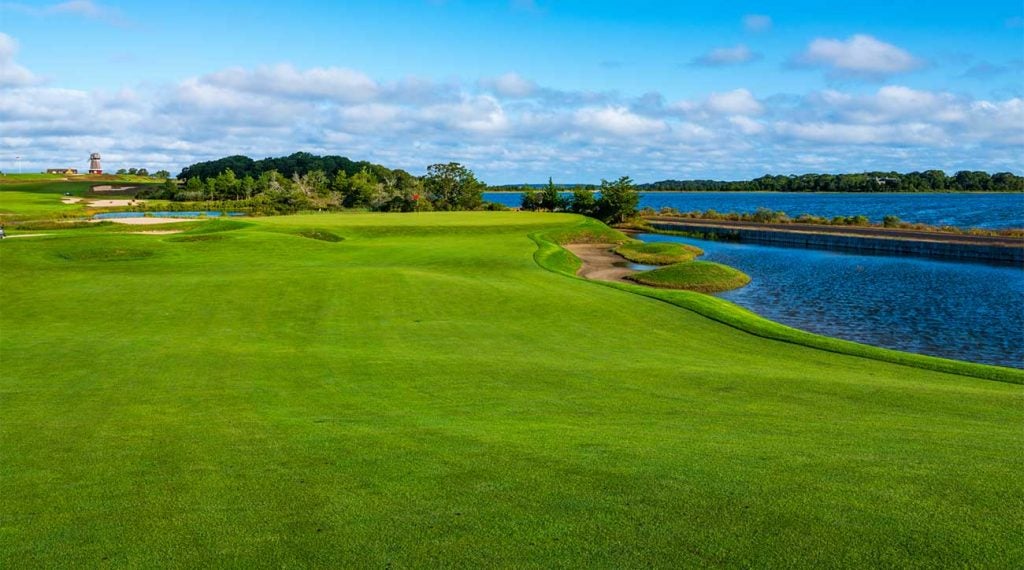 The 14th hole at the National Golf Links of America.
LC Lambrecht

While the cape is not taken from a specific hole, experts believe that a big inspiration was the second at North Berwick. Aptly named “Sea,” the tee shot plays over the water or beach, and asks the player to decide how far they can carry. Three bunkers guard the front of the green.

This hole might be where the idea that a cape template required a risk/reward tee shot started. The fairway is set diagonally from the tee box on the other side of Mangrove Lake. The green moves from left to right, with a deep bunker on the left side. This means that the closer you keep your ball to the water on the tee shot, the better angle you will have into the green. A hole with strategy around every corner.

The 14th at Fishers Island is another spectacular cape, despite the green not being surrounded on three sides. The fairway is to the right of the tee box, with a pond between the green and the player. The second shot still has a forced carry, which adds an extra element of strategy. The green is no reprieve, with two bunkers curving around the back.

Many people also consider the finishing hole at TPC Sawgrass to be a version of a cape. The water hazard runs up the left side of the hole from tee box to green. The thin fairway is nerve-racking to try to find in a practice round, let alone to close out a Players Championship.

One rendition of the modern cape is the finishing hole at Pebble Beach. The par-5 asks the similar question on the tee shot – how far do you think you can reach? With the Pacific Ocean up the left side all the way to the green, and some trees strategically placed up the right side, this hole is one of the best finishers on the PGA Tour. It is always filled with drama when it plays as the 72nd hole of the U.S. Open, as well. 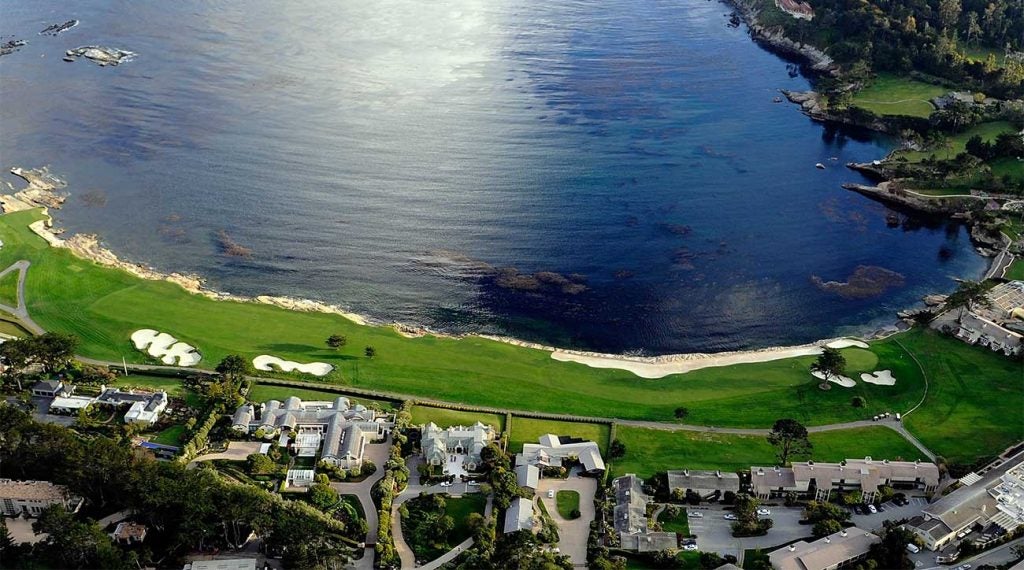