What’s a bury pit? Why there might be a lot buried beneath the surface at your golf course 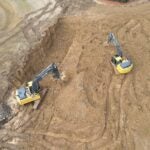 Excavators at work at Overton Park in Memphis.

Ever heard of a bury pit? The first thing I learned about building a golf course is there’s sometimes a lot buried beneath the surface, and I mean that literally. Most golf courses, at least the one I’m helping build at Overton Park in Memphis, have large holes dug with excavators 20 to 30 feet deep. But these holes have a purpose — we bury everything from the surrounding area we don’t want on the final hole in there. Around here, that means mostly trees we cut down, cement from the ripped-up cart path and some turf.

When the holes get covered up, most will be under mounds or bumps to keep the material far from the surface. Almost always, the pits are dug in spots that aren’t consequential locations for the finished hole. The shapers come in and smooth the sides, pile dirt and use their artistic touch to make the hole aesthetically pleasing. Then we cover it in grass.

The site manager at Overton Park, Paul Mentikov, said bury pits save construction costs by not having to haul debris away. “You will also generate fill material (the dirt from digging the hole), which shapers use to build the features on the golf hole,” he said.

Mentikov estimates that bury pits have been utilized on about a quarter of the approximately 40 courses he’s been involved in building. Most courses that are cutting down trees will utilize bury pits unless it is restricted, and almost all redesigns or renovations likely have pits to bury the old surface material.

On this project, the veterans have spent most of the time digging in the excavators. I’ve been running the skid steer, a smaller contraption that has a claw or bucket on the front so I can pick up stuff too heavy to carry by hand. It works like an arcade game, with a joystick for the claw and another to move around. I’ve certainly had my mishaps so far — getting it to actually move was a struggle, and then I momentarily broke the claw function. Eventually I got the hang of it and was soon carrying massive tree trunks and large chunks of old cart path across the site to the edge of these huge holes in the ground.

I had never heard of a bury pit before this project. I’m aware of topography and undulation — much of which I knew was artificial — but I assumed crews just pushed dirt into piles or brought dirt in from off site. I had never thought of the trees or other substances that were perhaps buried deep beneath my feet.

But the genius of bury pits? Simplicity. Need to take down that massive tree to extend the fairway? Great, we only have to move it 100 yards and bury it under a mound that separates two holes. No need to get someone to take it away or send it through a wood-chipper — it can all sit underground and make the golf course better.

Shockingly, I never before considered where all the junk goes.