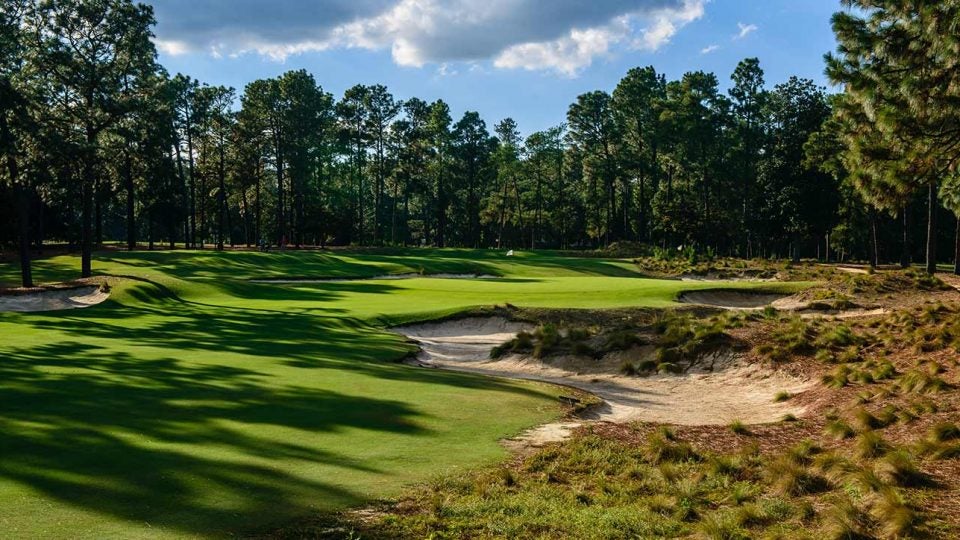 A view of Pinehurst No. 2 at Pinehurst Resort in North Carolina.
Joann Dost

Welcome to GOLF’s Travel Mailbag, a weekly, interactive GOLF.com series in which members of our staff field your course and travel-related queries. This week, Josh Sens dives into the best way to spend a long weekend in North Carolina’s prestigious Sandhills.

We’re planning September 30 to October 4 in Pinehurst. What’s a good lineup? Any other tips to a Pinehurst trip? – @shaneseaver via Twitter

So, you’re headed on a buddies’ trip to the Sandhills of North Carolina.

We could argue — and, in fact, we will argue — that, pound for pound, there’s no better destination for public golf in the United States.

Are you thinking of a long weekend? We’re thinking you should think of staying a bit longer. You’ll need at least four days to take in the best options, and even then, you won’t see it all.

Travel
Travel mailbag: Is the trek to remote Cabot Links Resort worth it?

As you probably know, the mothership here is Pinehurst Resort, which is home to — count ‘em — nine 18-holes courses, plus a short course called The Cradle. Of those 18-holers, Pinehurst No. 2 ($305-$485) is the mac-daddy, a 1907 Donald Ross design that has hosted three U.S. Opens, three U.S. Amateurs, a U.S. Women’s Open, a PGA Championship, a Ryder Cup and … we’ll stop here for fear of running out of space on the Internet. In 2011, the course was beautifully remastered by Bill Coore and Ben Crenshaw, who widened the fairways to introduce more strategic options while restoring the sandy wastes and natives grasses that help define the way the course both looks and plays.

And play it you will. This one is a must, (and all the more fun if you set your ego aside and pick the proper tees).

Same goes for Pinehurst No. 4 ($245-$385), which has gone through multiple iterations, including a 1999 redesign by Tom Fazio, and, two years ago, a thorough overhaul by Gil Hanse that earned it GOLF’s recognition as the Best New Course You Can Play of 2018. It’s no accident that when Pinehurst hosted the 2019 U.S. Amateur, No. 2 and No. 4 served as the stage. They’re the top dogs on the property. Playing them back to back is a good way to compare them, but it’s also a lot of golf to tackle. So, come to think of it, consider spreading them over two days if you’ve got the time.

Travel
What it’s like playing the Gil Hanse-redesigned Pinehurst No. 4 for the first time

After No. 2 and 4 in the Pinehurst resort pecking order, a lot of folks would point you to No. 8. But we’ll encourage you to give No. 3 ($95-$125) a chance. It was Ross’s favorite course at Pinehurst for a couple of decades and it still possesses a slew of the interesting features that he loved. It’s a par-68 that tips out at 5,155 yards, but scoring here is tougher than the yardage suggests. Pair No. 3 with a bonus loop at the par-3 9-hole Cradle ($50), and you’ve got yourself an A-plus day.

Within an easy radius of Pinehurst Resort, you’ll find plenty more of Ross, the finest being Mid Pines ($85-$215) and Pine Needles ($85-$235), sibling courses under the same ownership. Ross built them both in the 1920s, and in 2013 and 2017, respectively, Kyle Franz restored them. Design-wise, the two courses are kindred spirits, but Pine Needles is the longer, tougher routing. Mid Pines is no pushover either, but it’s more receptive to a wider range of skills, and its rough-hewn look, with sandy wastes and long eyelashes around its bunkers, make it a visual delight as well as a great strategic test.

We know there’s only so much daylight, but if you want to see Ross from yet another angle, check out Southern Pines Golf Club ($49-$89), a short skip away. The course opened in 1906 and what it lacks in modern-era length (it’s just over 6,200 yards) it more than makes up for in intrigue. It’s well worth a visit and seems destined to be even more of a draw in the future, as it was just purchased by an investment group led by the owner of Mid Pines and Pine Needles. Given the connection, it’s not hard to imagine another Kyle Franz-style restoration of a great Ross course in the years ahead.

Last but nowhere near least, you can’t leave the region without taking a crack at Tobacco Road ($70-$189), a 1998 design by the late, great Mike Strantz. Ask enough people, and you’ll find some who will tell you that the course is “goofy” and “tricked up.” Do yourself a favor and cut those people out of your life. Etched through a sand quarry, this is a wildly creative, rollicking design, built for wildly creative, rollicking play. It’s filled with quirks and compelling angles and it allows for such a varied arsenal of shots that we wager that you’re going to want to loop it twice.