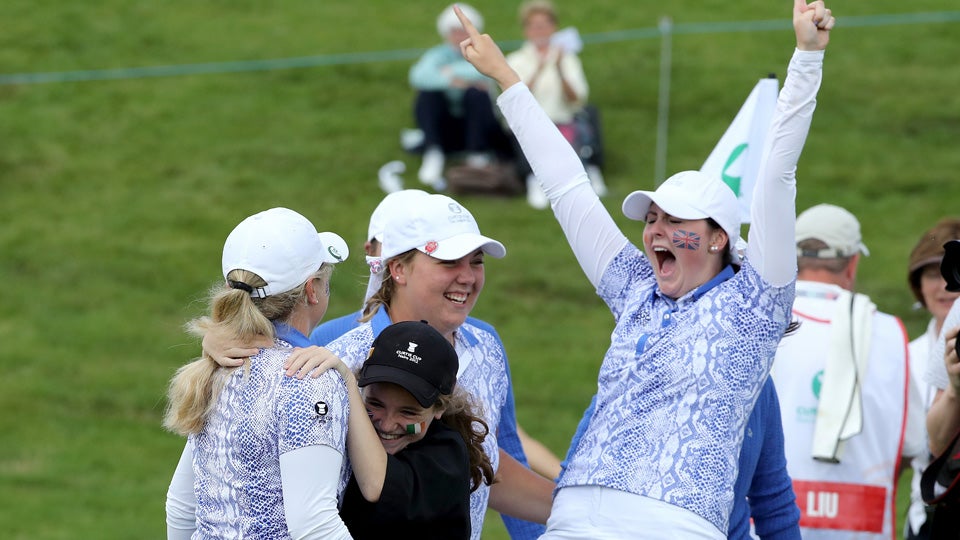 Bronte Law of England and the Great Britain and Ireland team, along with Law's sister, Bella, celebrate after the win.
Getty Images

DUBLIN (AP) Bronte Law became the second player in Curtis Cup history to go 5-0, beating Mika Liu 2 up on Sunday in Britain and Ireland’s 11 1/2-8 1/2 victory over the United States.

Four points ahead after taking five of six matches Saturday at Dun Laoghaire, Britain and Ireland added 3 1/2 points in the eight singles matches to win the biennial competition for only the third time in 20 years.

Law, the 21-year-old English player who will be a senior at UCLA, joined American Stacy Lewis as the only players to go 5-0 in a single Curtis Cup. Lewis did it in 2008 at St. Andrews.

”The team was just incredible,” said Law, the Annika Award winner this year as the top college player. ”For me, coming into this, a lot of people had written us off. … For me to end it this way – it’s probably going to be my last Curtis Cup – is just a dream. I am so proud to just represent my country.”

Britain and Ireland won in 1996 at Killarney Golf and Fishing Club, also in Ireland, then lost seven straight before winning again in 2012 at Nairn in Scotland. The Americans lead the series 28-8-3.

”Nothing even comes close to this,” said MacLaren, who graduated from Florida International University in May. ”This is incredible. I can’t even put it into words.”

”I thought they were going to pull it off and fought to the very end,” U.S. captain Robin Burke said. ”I am proud of all of them. They have a lot of spirit and a lot of heart. ”(Britain and Ireland) just played really well yesterday. They made a ton of birdies on us (and) we almost recovered. We just didn’t quite get there.”