Straight-talking Jim Furyk, captain of the 2018 U.S. Ryder Cup team, doesn’t mince words when asked about the host venue, Le Golf National. “I love the course,” he says. “It’s [one] that in my heyday would have been perfect for me to play.” 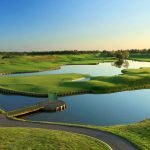 You may also like PHOTOS: Take a hole-by-hole tour of Le Golf National’s Albatros course, host of the 2018 Ryder Cup

It’s easy to see why Furyk gushes. Le Golf National’s Albatros course is a Gallic version of Furyk’s—and the PGA Tour’s—home layout, the Players Stadium course at TPC Sawgrass. Admittedly, it’s a bigger, brawnier version, in yardage and scale, but its origin, look and shot values are remarkably similar. Hewn from landfill that was later flattened, it understandably sports a manufactured appearance, with some holes set down in faux-links fashion, others built up with massive amphitheater-like hillsides, ready-made for maximum spectator viewing. A fistful of lake-menaced holes look as if they were airlifted straight out of West Palm Beach, but unquestionably, they offer potential risk/reward drama, notably the course’s last four, three of them splashed with liquid peril, with island greens at the 15th and 18th.

Still, Le Golf National is hardly a bombers’ paradise. It has hosted the European Tour’s French Open since 1991 (with two exceptions), and because the fairways are generally narrowed and bracketed with dense rough, scores run high and champions tend to be ballstrikers. Alex Noren triumphed in 2018, with a score of 7-under-par. Other winners include U.S. Open champs Graeme McDowell, Martin Kaymer and Retief Goosen. Echoes Justin Thomas, who played in this year’s French Open, “I knew right when I got here that this was a very difficult golf course,” he said. “You have to hit it in play. You can get it snowballing pretty quickly out here if you’re not careful.”

The final word (as always) on Le Golf National goes to Phil Mickelson: “I think it’s phenomenal because it’s got the best viewing of any golf course I’ve seen, as well as the risk/reward,” says Lefty. “The last four holes are spectacular…I think it’s going to be wonderful.”

Translation: As with every Ryder Cup course, it will all come down to putting.