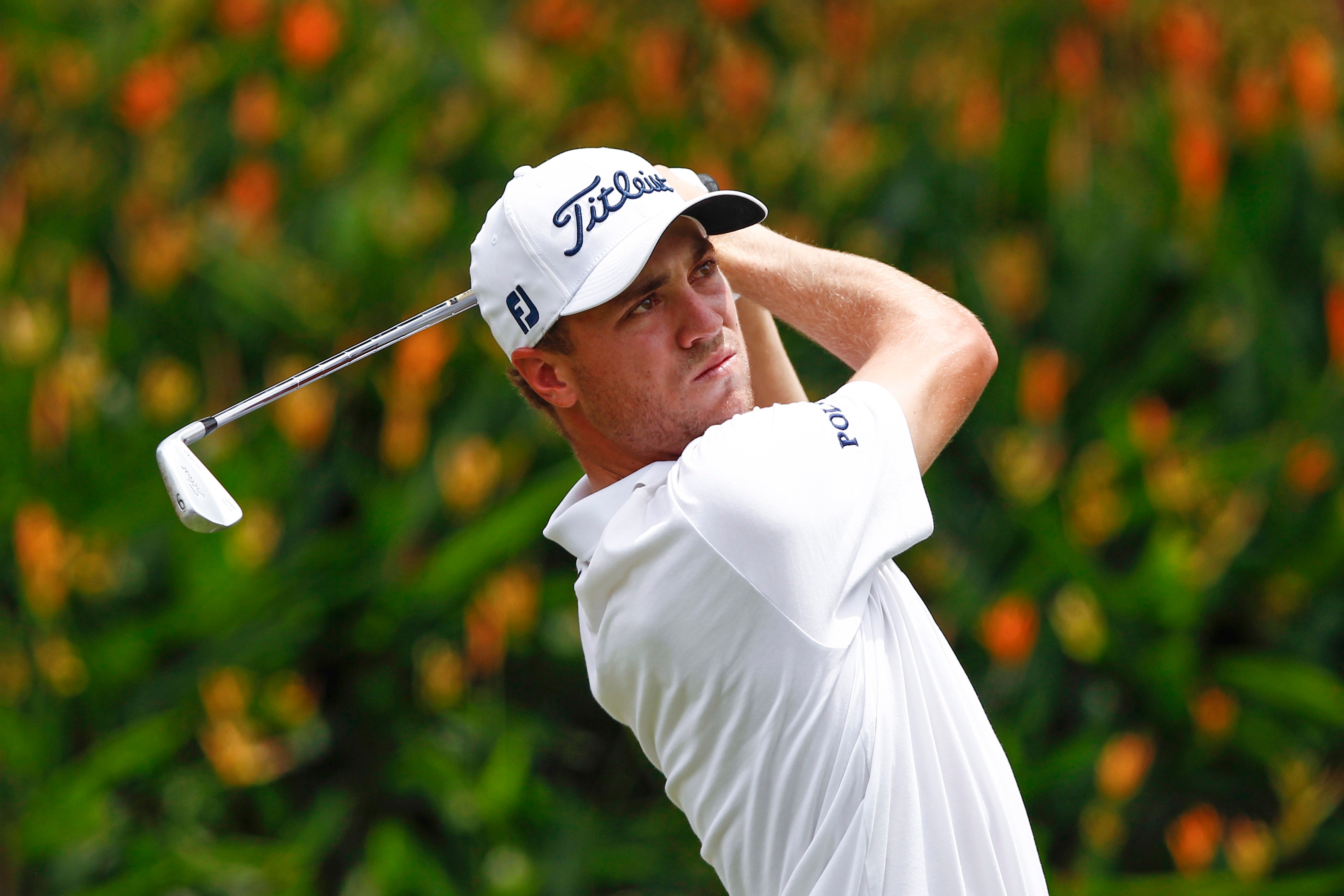 Justin Thomas during the second round of the CIMB Classic.
AP Photo/Joshua Paul

KUALA LUMPUR, Malaysia (AP) — Justin Thomas had an eagle and nine birdies in shooting a course-record 61 at the CIMB Classic on Friday, taking the lead into the weekend at the PGA Tour’s event in Malaysia.

Thomas moved to 15-under 129 at the Kuala Lumpur Golf and Country Club for a one-stroke lead on American compatriot Brendan Steele, who shot a 63 and matched Thomas by having an eagle at the par-5 3rd hole.

First-round leader Scott Piercy had two bogeys on the front nine to shoot a 69 and was in a share of third place, two shots off the leader, along with Spencer Levin, who had a round of 64, and Japan’s Hideki Matsuyama, who shot 66.

Former No.1 Adam Scott was at 10 under, and two-time defending champion Ryan Moore at 8 under.

For Thomas, a 22-year-old from Louisville, Kentucky, this is the third time he has led at the halfway point of a tour event, but is still seeking his first victory.

His superb round, which included six birdies in a seven-hole stretch from No.9 to 15, disguised his physical struggles as he coped with jetlag and the oppressive tropical heat.

”Thank God for the air-conditioning,” he joked as he walked into his post-round media conference.

”I never have been to this part of the world before and my body is still adjusting. Today was a little better. I even slept in, until 5.30 a.m.”

The extra sleep paid off as he briefly threatened the magical score of 59, requiring birdies from two of the last three holes, but he could not get it done.

Nick Watney also shot a 61 in this tournament in 2012 but that was at a different course with a par of 71.

If Thomas keeps up this form, he could comfortably break the tournament record score of 23-under, set by Bo van Pelt in 2011.

”Being five-under through the first five holes – which are pretty scoreable – made a difference,” said Thomas, whose previous low round was also a 61 at the par-70 Sony Open in Hawaii.

”That got me in that attack mind frame. I did well and gave myself easy birdie putts.”

Piercy also struggled in the heat, slipping down the leaderboard after having been at 13-under following three straight birdies to start his round.

”The heat got to me a little bit today and I made some mistakes,” Piercy said.

”It’s hard to follow-up 10-under anyways. So, I felt like I did pretty well. It wasn’t terrible, terrible, it was just a little out of sync and when you’re firing on everything and then out of sync a little bit, seems like it’s really bad, but it’s really not that bad.”

Among other notable players, Sergio Garcia had a 67 to be at 8 under, seven off the pace; Paul Casey (69) and Henrik Stenson (67) were a further stroke back, while Padraig Harrington had an even-par 72 and was at 4-under, a shot ahead of Ernie Els (69).