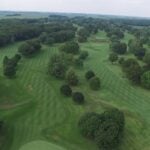 Kankakee Elks Country Club is just outside of Chicago, but worth the trip.

With the PGA Tour in Chicago this week for the second stop in the FedEx Cup playoffs, let’s turn our eyes to Windy City golf. On GOLF Magazine’s current roster of World Top 100 Courses, Chicago Golf Club and Shoreacres are the two top dogs in the area, ranked 19th and 45th respectively. In your mind, what’s the next best course in Chicago?

Joe Andriole (panelist since 2006, has played all 100 of the World Top 100): Chicago is a golf-rich area, though much of the land is flattish. The two Raynor courses [Chicago GC and Shoreacres] separate themselves. I would pick Skokie Country Club as the next best.The terrain is attractive. Architecturally, it’s complicated. Originally a Bendelow and then a Ross, but land was sold off and Langford called in. There was additional tinkering and then a “unification” of styles by Ron Prichard near the turn of the century that resulted in a true classic. The holes are varied. Bunkering is superb; formidable and strategic; many are in the fairway! The greens are multi-dimensional. The course is well-presented as the agronomy complements the architecture.

John Preschlack (panelist since 2006, has played 93 of the World Top 100): Beverly Country Club is a strong No. 3 course in Chicago. Donald Ross re-worked an original George O’Neil layout. The recent restoration by Prichard and Rae is outstanding. Aerial shots from the 1931 U.S. Amateur were used for bunker placement and tree removal. More than 900 trees were taken out in the last few years. No two consecutive holes play the same direction and many holes feature undulations not found in Chicago. The course features some of the most interesting and challenging greens anywhere.

Tyler Rae (panelist since 2019, has played all 100 of the World Top 100): In my opinion, Old Elm Club slightly edges out a few clubs I’m currently associated with, due to its storied legacy with a Harry Colt and Donald Ross collaboration (Colt being the architect and Ross being the constructor of the links), and a fantastic set of varied/crowned greens. It also boasts an idyllic setting and atmosphere that only adds to the fun layout. The maintenance regime has taken the course to the next level and it is a treat and an experience you look forward to mightily.

What’s the best public-access course in Chicago, and why?

Andriole: Ravisloe Country Club, a Donald Ross classic that was once private.

Rae: Spring Valley Country Club and Kankakee Elks Country Club, both a hike from downtown Chicago and not really considered “Chicago” golf courses, but both worth every single minute in the car. The nearest competitors lag too far behind in the public category. Honorable mention: Shepherds Crook Golf Club in Zion, Ill., with new and improved maintenance and conditioning and a sneaky/early-era Keith Foster gem.

Every great golf city has a great sleeper of a golf course. What’s the best under-the-radar course in Chicago, and why?

Andriole: Kankakee Elks Country Club must have been something in its day. Unfortunately, the tree planting has been excessive and idiotic. Nonetheless, the green complexes are wondrous and the walk is pleasant while you muse over what could be!

Preschlack: Knollwood Club, a Golden Age Charles Alison layout that showcases his push-up greens. Never comes up in a top 10 courses in Chicago conversation, but deserves to. Hosted the Western Amateur in 2016. Full disclosure: after Keith Foster’s first-rate renovation, I was inspired to join Knollwood in 2013.

Rae: Barrington Hills Country Club, about 35 miles northwest of the city. It’s a 1921 George O’Neil layout that showcases an incredibly bold set of push-up greens laid over a splendid canvas of rolling terrain. O’Neil took in everything he learned while working as the golf professional at Beverly CC (from Ross when he came in and rebuilt Beverly in 1918) and utilized his training well. I thought it was very underrated when I saw it this spring. A true sleeper in every sense of the word.