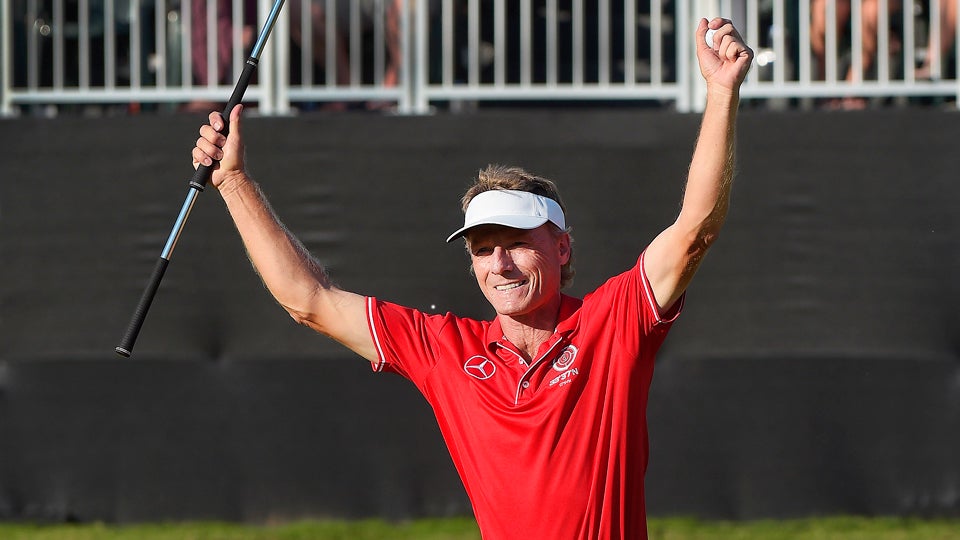 BIRMINGHAM, Ala. (AP) Bernhard Langer erased any doubt not long after his nearest challenger had all but conceded.

Langer ran away with the Regions Tradition on Sunday for his sixth senior major and 27th PGA Tour Champions title. He birdied the final three holes and five of seven to pull away for a six-stroke victory over Olin Browne, who had already predicted that ”nobody’s running down Berhnard.” The 58-year-old German finished with a 5-under 67 at Greystone for a 17-under 271 total.

Langer matched Gary Player and Tom Watson with the third-most major championships on the 50-and-over-tour, behind Hale Irwin’s seven and Jack Nicklaus’s eight. He opened the day with a four-stroke lead, lost a couple of strokes and closed emphatically with the birdie binge.

Langer could become the first player to win all five of the current senior majors if he wins the Senior PGA Championship next week.

”It’s just an amazing feeling to win any tournament, but to win the majors against the best players on tough venues and good courses just means that much more,” Langer said. He called it his 100th victory as a professional, ”and to do it in a major means even more.”

Browne made a 6-foot birdie putt on the final hole for a 67. Tommy Armour III, Joey Sindelar and Kirk Triplett finished at 10 under.

It was the lowest score at the Tradition since Fred Funk finished with a 269 in 2008 at Oregon. It was also the largest margin of victory since Doug Tewell won by nine in 2001.

Browne closed with a six-foot birdie putt for a 67 but some near-misses on the greens helped keep him from challenging Langer at the end. Langer came in with the tour’s lowest scoring average and still hasn’t finished worse than 11th this year.

”He’s as fit as he’s ever been,” Browne said. ”They’ve tried to ruin his putting by taking away the long putter and he’s not letting that happen. He’s still putting great. He’s just a consummate course management guy. He absolutely refuses to give an inch. He charts the course better than anybody else, he plays to his strengths and he’s tenacious.”

That was certainly true Sunday.

Langer saved par with a 20-footer upslope on No. 4 after his tee shot rolled into the water, forcing him to take a drop. The normally stoic German raised both arms in the air and then pumped his right fist celebrating the shot – more of a reaction than when he polished off a win that hadn’t really been in doubt for a while.

FIX FINDER: Transform Your Game With Our Free Swing App!

”That was key to keep the momentum going,” Langer said. He opened with a 5-foot birdie putt on the first hole but said his most consistent success came off the tee.

”I drove the ball phenomenal,” Langer said. ”I can’t recall hitting every fairway for 36 holes in a row, and I’ve done that, I think. I don’t think I was in the rough once the last two days, which is pretty unique.

”I think that was key to the victory. My putter was hot and cold. My irons were hot and cold, but the driver was really the outstanding club. It didn’t let me down, not one time the last few days.”

Armour closed with a 66 with birdies on five of the last six holes while Sindelar and Triplett each had 68s.

John Daly finished at 5 under with a closing 74 after three straight rounds below par. He hit a sprinkler head on No. 10, but did finish with a crowd-pleasing eagle on 18.

”The guy says two shots of Crown on a putt like that, I’m usually going to make one of those,” Daly said. ”If it’s for Crown, I’m making it.”

The 70-year-old Irwin bested his age with a 69. He finished 14 over for the tournament, though, including an 80 on Saturday.