ST. LOUIS — As he stood over a six-footer for birdie at the 17th hole, Adam Scott knew: he was the last man with chance to challenge Brooks Koepka for the PGA Championship. He’d gone toe-to-toe with his final-round playing partner, even grabbing a share of the lead after a barrage of birdies at 7, 8, 10, 12 and 13. Now he had a chance to cut Koepka’s lead to one heading to the last.

But his putt came up just short and low, effectively ending Scott’s valiant charge right there. “That really hurt that I missed that, just not to make it interesting up the last,” he said. “Look, I just didn’t hit it hard enough. I think I read it correctly. I just don’t think I hit it hard enough, and that’s a shame.”

Scott should find shame in little else about the week. The 2013 Masters champ and former World. No. 1 provided a throwback charge on the weekend, shooting 65-67 to claim solo third place. That meant his best PGA Tour finish since 2016.

The Aussie also acknowledged getting caught up in the day’s excitement. “There was lots happening out there. Tiger was charging at times, and that was filtering back through the groups, certainly. Every leaderboard that changed, no matter what hole you were on, you knew what Tiger did, and it’s a really fun atmosphere to be in. But I was pleased with how I played through the turn.”

Scott also spoke of Jarrod Lyle, his friend and countryman who passed away from leukemia the night before the tournament began. “A lot of people were yelling out his name out there, so it was hard not to think of Jarrod, certainly, obviously all week for us all,” he said. “And for the people who knew him quite well that were playing this week, golf was a little distraction. But probably now, as we get some time off and get to go home and be with our family, we’ll be able to celebrate him a little bit more.” 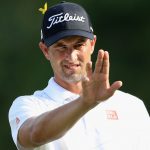 Scott raised eyebrows at the beginning of the afternoon when he opted to carry two putters in his bag — his broomstick-style putter for short putts and a shorter putter for long putts. But his play put the focus squarely back on the final-group theater coming down the stretch. Scott acknowledged that he’d acquitted himself well on the course. “This was some really good golf this week,” he said.