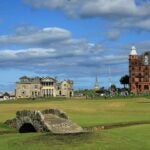 Pine Valley. Cypress Point. Bethpage Black. They are the most glorious golf courses in the world — but also capable of producing some inglorious moments. In honor of GOLF’s recent release of the Top 100 Courses in the World, we asked our staffers to swallow their pride and share their most humbling, embarrassing or chokiest moment on a Top 100 course. There is a story of a near-brawl. A score of 17 — yes, on one hole. And a newfound fear of shorts. We broke this series into three parts, with Part I below. Parts II and III will follow in the coming days.

A shot at a magical score. Then came 17.

There’s a course in Clementon, N.J., that has a reputation for being challenging and is safely in the Top 100. It shall go unnamed here, but you may already have enough clues to ID it. One warm day a long time ago, I was playing this course and over my head. Our group had started, uncharacteristically, on its 10th hole. I came to the 8th, our 17th, only seven-over for the day. As I am not very good at golf, that seemed unlikely and maybe not even believable, but there it was, per our fastidious scorekeeper and host. He said (he barked), “Bogey-bogey for 79!” I had broken 80 before, though not often and most assuredly not there. The 8th on this course is a short par-4 — short and gorgeous and rugged — with a sloping, high-top green that is surrounded by deep sand pits, among other unpleasantries. There are actually two greens on this hole, but this report comes to you from the one on the right. The green and its surrounds, to use the word of the day.

I drove it well. I topped my second into the front bunker. I bladed my third over the green. My fourth shot finished in the same trap where my second had been a few hot minutes earlier. Skull over. Skull back. Over. Back. On it went. I didn’t quit. I did lose count, but my caddie did not: 17.

On the day’s final hole, I made a routine bogey.

I missed my tee time — on the Old Course

Several years back, three colleagues and I had a 36-hole day for the ages: Kingsbarns (No. 81 on our latest World list) in the morning, followed by an afternoon time at the Old Course at St. Andrews (No. 3), about a 15-minute drive north. There was plenty of time between our appointments — two or three hours, as I recall it — so after finishing our round at Kingsbarns, we made full use of the facilities, enjoying a hot lunch and a couple of pints in the clubhouse before wandering out to the range to further calibrate our games for the Old Course. It felt like we had all day, which, of course, we didn’t. In fact, we had only an hour or so until go-time on the O.C. when someone in our group casually said, “We should probably get going.” Yeah, probably.

We grabbed our clubs, piled into our rental car and began motoring toward St. Andrews. All was well until it wasn’t. Less than a mile from the ancient links, we hit a snarl of standstill traffic. I don’t remember the cause, but I do remember thinking this had to be the worst backup in the town’s 800-plus-year history. The clock was ticking, and our hearts were pounding. Twenty minutes to our tee time … 15 … 10 … nightmare stuff. Old Course starters, as you may know, don’t suffer fools. They run the first tee with military-grade precision, which means if you miss your booking, you’re far less likely to hear, “You’re a wee bit late, laddies! But doont fret now, we’ll get you out in no time!” than you are to be scolded and sent back to your car.  When we finally freed ourselves from the mess of vehicles, it had become painfully clear: We weren’t going to make it.

We frantically texted a colleague — the fourth member of our group — who had had the good sense to leave Kingsbarns earlier. He was on the first tee, fuming. Minutes later, we joined him, disgraced. There were no words. Only empty stares. We had missed our tee time on the Old Course. Huddling around the starter’s window ensued. Tee sheets were examined. Brows furrowed. You could cut the tension with Old Tom’s niblick. And then, by some small miracle, we were back on the schedule. Like, right now. We asked no questions, hurried into position and sheepishly knocked four balls down one of the famous fairways in golf. We never looked back. — Alan Bastable

The first Top 100 course I ever played was Oakmont, which basically destroyed my game and my confidence. It was late in the round when I was waiting for a playing partner to hit out of a greenside bunker. My ball was about 30 yards away to his right and also in the sand. After he hit, I for some reason thought it was a good idea to enter the bunker in the same spot he did, retrace his steps and then (in the most bizarre logic imaginable) make a right turn and walk straight down to my ball — carefully trudging through the sand the entire way. Many paces later when I got there, I turned around to see our caddie, rake in hand, throw his hands up in the air and drop his head in disgust. As someone who had played a lot of golf from a very young age, I still don’t understand why I thought that was the best idea at the time and didn’t simply elect to enter the bunker closer to my ball.

I feel like I embarrass myself on the golf course frequently, so I’m surprised I can’t think of anything better to write than that. None of these moments, however, top the most embarrassing moment of my six-plus years as a GOLF staffer, which happened when I went with colleagues Dylan Dethier and Michael Bamberger to a charming Italian restaurant in New Jersey after the 2019 Northern Trust. Midway through dinner, I reached and helped myself to the spaghetti in the middle of the table and plopped a good portion on my plate. It was then, after a few bites, when Dylan informed me that was in fact Michael’s spaghetti, which came on the side with his entree. I helped myself to Michael Bamberger’s spaghetti like a barbarian. I still have nightmares. — Josh Berhow

From the bunker to the maintenance shed

I’ve played only one Top 100 course, but it was Bethpage’s brutal Black course, so I racked up plenty of Top 100 embarrassing moments. My round, alongside a few colleagues last fall, actually started off well with a par from the left rough on the 1st hole. Of course, my adventurous trip through the legendary par-5 4th quickly disabused me of any hopes of a good score by day’s end. But it was at the par-3 14th that featured my unquestionably worst moment.

Playing roughly 150 yards, the pin was tucked toward the front left edge of the steeply elevated green, with big, steep bunkers guarding the front. Long anywhere was safe, especially toward the middle. Instead of the smart move, I went right at the pin, hitting a solid wedge that lost gas at the green and fell just short and into a fried-egg lie in the bunker closest to the hole. The worst was yet to come.

After climbing down into the trap and digging my feet in, the putting surface a good 6 feet above me, I took a mighty whack and sent my ball sailing a good 100 yards over the green and into the woods near the maintenance shed, way, way out of bounds, never to be seen again. — Kevin Cunningham

Are you sure you work at GOLF?

I shattered my left foot in an accident in April 2019. Didn’t play for over a year, or at least until the fall of 2020, when an invite from a member at Somerset Hills in New Jersey (No. 43) came through. Despite my lingering pain and tin-roof-rusted technique, I had to accept. The place is fantastic — Tillinghast gems one after the other. And on that day, Northeast fall colors in all their orange-yellow-red glory. Not fantastic: my first round following surgery. It got so bad that at one point my host asked, “Didn’t GOLF require a playing test before giving you your job?” A low point. Foot and game have been mending since. But, yeah, that one hurt. — David DeNunzio

O.B. at Merion, lost in France, and the Jake Owen line

Yikes. I’ve had the good fortune to desecrate a number of these properties with my presence. As a 19-year-old, I showed up as a guest at Merion. I was late and distinctly undignified. I was encouraged to stop changing my shoes in the parking lot and instead bring them into the locker room, which seemed like an inconvenience at the time. Then I hit my opening drive from the famed back tees, with some lunchgoers watching. My ball vanished.

On a different road trip, I showed up at the front gate of Pine Valley with Sean Zak, who is also in this column, curious to take a peek around. We were shown the proper route to make a quick U-turn and exit the premises.

On another road trip still, Sean and I — having battled Parisian Google Maps, Parisian road signs and the confusion of a secretive Top 100 course — showed up at Morfontaine about 40 minutes late for our assigned tee time and were greeted by an extremely stern clubhouse attendant, reprimanded and ultimately allowed out (with emotional demerits).

My first time to the Masters, I won the media lottery and played the Monday after the tournament’s conclusion. We played from the members’ tees, and at No. 13, I asked my caddie for the line. He pointed toward the fairway, but then paused and pointed toward a small V on the left side of the dogleg. “Jake Owen hit it there a few weeks ago,” he said, referring to the country singer. I tried the Jake Owen line, hit the first tree, my ball ricocheted into Rae’s Creek, and Jake Owen forever owns me.

At Myopia Hunt, I was hosted by a member who played the course so infrequently that as we came up the 18th hole (having teed off in the first slot of the day) one of the assistant pros came out to ask him for proof of membership.

I could go on, but the point here is this: If you’re going to play a Top 100 course, you’re probably going to embarrass yourself at some point. Embrace it! Enjoy it! You’ll remember the good with the bad, and both will come fondly. — Dylan Dethier