The Ritz-Carlton, Half Moon Bay 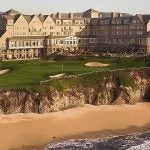 During Prohibition, the hidden coves and thick fog around Half Moon Bay provided cover for both Canadian rumrunners and local moonshine bootleggers. Today, the town's towering cliffs overlooking the Pacific Ocean house one of the most visually stunning course/hotel combos on the West Coast. Half Moon Bay Golf Links' Ocean Course holds favor with resort golfers, beguiling players with ocean views from nearly every hole. Water use was cut in half a few years ago and the fescue was left to grow between and around holes. The resulting fast and firm playing conditions bring the ground game into play on numerous holes. In stark contrast, the neighboring Old Course is a traditional Northern California parkland design that demands an all-out aerial assault from tee to green. Its famed par-4 18th hole plays over a barranca into green snuggled just below the hotel's firepit terrace. Half Moon Bay's unofficial tagline is "fire and wine." Guests in search of the full immersion splurge on an ocean-view terrace firepit room.