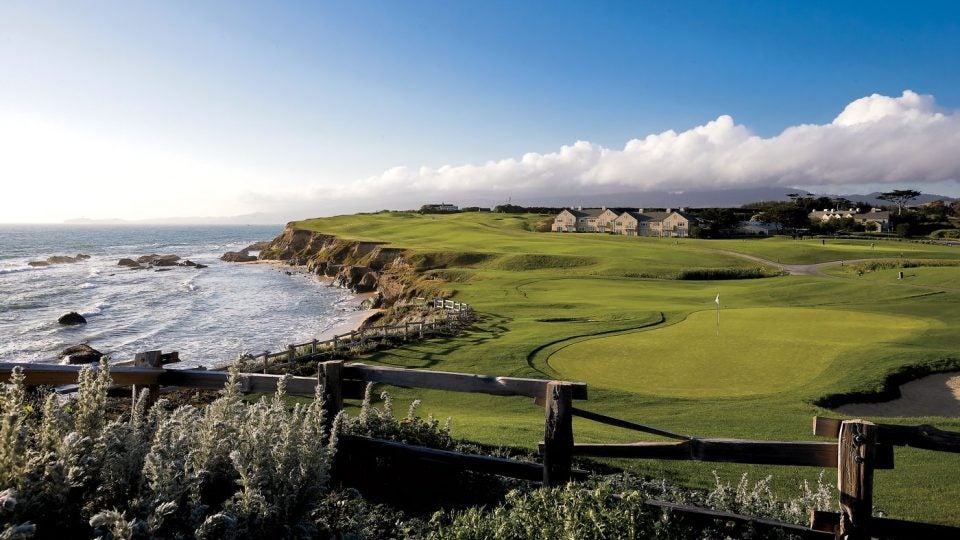 The Ritz Carlton, Half Moon Bay, rests high atop a bluff overlooking the Pacific Ocean. It is less than 30 miles from San Francisco but, really, it’s a world away. The resort, which Architectural Digest called the “most beautiful hotel” in California, is a luxury getaway delivering a welcome respite from the rigors of daily responsibilities. The area’s towering cliffs represent dramatic evidence of the clash of land and water over the eons.

Spanishtown, today’s community of Half Moon Bay, is the product of the 1840s Spanish land grants. It enjoys the distinction of being the earliest settlement in San Mateo County. The colorful history of Half Moon Bay includes Prohibition-era exploits. Canadian whiskey was purportedly offloaded on the area’s isolated beaches. Thanks to its many bootleggers, San Mateo County attracted its fair share of attention from federal agents.

Half Moon Bay was incorporated in 1959. The temperate coastal climate enthralls locals and visitors alike. October’s Art & Pumpkin Festival annually cements its status as the “Pumpkin Capital of the World.”

The Ritz Carlton Hotel opened in 2001. HKS Architects designed it to invoke the majesty and grandeur of 19th-century seaside lodges. The architectural firm says, “Picturesque dormers, gables and chimneys form a striking silhouette against an endless sky.”

The Ocean Course serves up classic resort golf seasoned with spectacular scenery. Fifteen holes of anticipation culminate with three spectacular closing holes. From the back tees, the par-72 layout is 6,914 yards long.

The Arthur Hills/Spencer Holt links design made its debut in 1997. The Ocean Course features a Scottish links design, with the prevailing winds whipping in from the Pacific rather than the North Sea.

From the elevated tee on the 403-yard, par-4 16th, you’ll enjoy one of those magnificent California coastal views. A downhill tee shot can find trouble both left and right. For some, it is time to leave the driver in the bag. Into the green, you don’t want to under club, as a ditch fronts the green.

You’ll also want to relish the view from the tee on the 184-yard, par-3 17th. The ocean, the bluffs and the hotel frame the scene. Right-handers may want to ride a fade in on an onshore breeze. Aiming out over the abyss requires a degree of confidence.

The uphill 533-yard par-5 18th bends left along a coastline sculpted over millions of years. Blind shots are not uncommon. Accounting for the onshore or offshore breezes is essential.

The Old Course was a collaborative effort by Arnold Palmer and Francis Duane. With the exception of the 18th, it is an inland layout. The course, which stretches to just over 7,000 yards, opened for play in 1973; Arthur Hills completed a redesign in 1999.

Here, the climate is conducive to the growth of cypress trees like those you’ll find at Pebble Beach Golf Links a hundred miles to the south. They appear along the fairways and behind the greens on various holes.

The green on the 225-yard, par-3 3rd is framed by water on the left and bunkers on the right. The long par-3 is played against a backdrop of those ubiquitous cedar trees.

The closing hole on The Old Course is the one everyone talks about: a downhill, 406-yard, par-4 set against a backdrop that includes the hotel and the cliffs. Near the green, the cliffs swing out toward the ocean, making them even more visible from the tee. Slicer’s beware.

The resort offers some creative golf packages. For example, there’s World Class Golf & Prime Rib Fridays. On Fridays, $170 will get you 18 holes on either the Ocean or the Old Course, plus a prime rib dinner. The same day replay rate is only $60.

The Golf & Spa Package is available Monday through Thursday. For $315, you’ll get 18-holes on either the Old Course or the Ocean Course, a 50-minute massage in the spa and a glass of house wine at Mullins Bar & Grill.

Other Things to Do

As one would expect, there are amenities aplenty at this award-winning, world-class resort. Enjoy complimentary culinary creations throughout the day in the Ritz-Carlton Club private lounge. Look to the lounge’s personal concierge staff to further enhance your stay.

The Ritz Carlton devotes 16,000 square feet to its ultra-luxurious spa. Improve your swing speed with some work on the Cybex equipment in the fitness center. Play a few sets on any of the six lighted tennis courts. Reflect on your round as you relax around one of the three gas fire pits overlooking the ocean waves below.

At the Ritz Carlton, Half Moon Bay, the ocean beckons in myriad ways. Surfers and sea kayakers play in the waters of Half Moon Bay. Titans of Mavericks events attract many of the greatest big wave surfers on the planet. Resort guests arrange for a memorable surfing experience through the hotel concierge.

Venture out into Pillar Point Harbor in a kayak. The resort offers rentals, tours and classes. Experience abundant marine life on its terms. Grab a whale-watching cruise in Princeton Harbor. The migratory path of the gray whale is about 10-15 miles offshore, and the boat will take you there. Ask the concierge for information about unforgettable seasonal whale-watching.

Those that prefer land-based activities enjoy an abundance of opportunity. Go horseback riding on the trails or the beaches. Bike up the coast and fill your lungs with invigorating ocean air.

Signature Drive traverses five distinct regions. Visit the Redwood Forest. Pick your own produce in the farm-to-market region. Stroll down the historic Main Street in the community of Half Moon Bay. Along the way, savor Pacific Coast vistas known the world over. The nearby Santa Cruz Mountains are home to dozens of wineries and vineyards. Unwind after a round of golf by attending a wine tasting.

The Ocean Course and the Old Course are located south of the community of Half Moon Bay. The resort is just west of the Pacific Coast Highway (State Route 1). From San Francisco, take the 30-minute drive south SR 1 south through the community of Half Moon Bay to the resort. When you fly into San Francisco International (SFO), the resort is only 23 miles away. Take I-280 south to STH 92 west, and then to SR 1 south.

Flying into San Jose International (SJC) is another option. The airport is about an hour east of the resort.  From San Jose, take I-280 north to STH 92. Go west on 92, then south on SR 1.