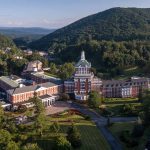 Staying at the Omni Homestead Resort is like walking through history. It was first opened in 1766 and has grown considerably. The Omni was designated a National Historical Landmark in 1991 and has hosted 23 U.S. Presidents, including Thomas Jefferson who enjoyed the spa as thousands still do today. Omni took over ownership in 2013 and pumped millions of dollars into restoring and renovating the facilities. The Old Course, which has six par-3s, six par-4s and six par-5s, dates to 1891 and was designed as an 18-hole facility by Donald Ross in the early 1900s. It claims to be the longest continually operating first tee in the U.S. The Upper Cascades course designed by William Flynn was opened in 1923 and has hosted seven USGA national championships. There’s a large outdoor recreation center with archery, rifle shooting, falconry, horseback riding and even hayrides. In the winter, skiing takes the spotlight, as the resort is home to the oldest ski slope in Virginia. Staying and playing at the Homestead is like walking back to simpler times, while still enjoying modern luxuries.