Your feel-good moment of the weekend? Watch Justin Thomas with 3 kids and 1 ball 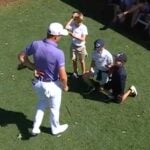 Justin Thomas and three boys on Friday to the left of the 10th green at Harbour Town Golf Links.

Justin Thomas had one golf ball. And there were three boys.

While there will be a winner and 143 non-winners on Sunday at the RBC Heritage, and there have been stories of penalty strokes and weird wind gusts at Harbour Town, there’s also been this this week: fun, with all of the feels. One of the best players in the world did long division on Friday to entertain three boys with just one golf ball, and you could hear the ‘awwwws,’ if they weren’t already coming from you.

It started inconspicuously. After parring the 10th during the second round, Thomas walked to the 11th tee box, and the three boys did a three-boys thing.

“Can I have a ball,” one yelled among the trio, who were kneeling a few yards to the left of the 10th green.

“Can I have a ball,” another repeated.

JT then did his thing. As they shouted, he slid his left arm behind his back and held up two fingers. Thomas then stopped when he reached his new biggest fans, and his game began.

“One, two or three,” Thomas said, pointing to the boy on the right.

“What do you got?” Thomas asked the boy in the middle.

Thomas nodded toward the boy on the left.

We knew the answer. And the boy in the middle ran off with his ball. But all three didn’t leave without a memory.

As did those of us who watched. Could Thomas have reached in his bag for two more golf balls? Yes.

But where’s the fun in that?