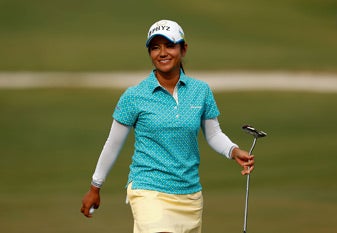 Ai Miyazato made nine birdies and a bogey on Friday.
Scott Halleran/Getty Images

The win hands Harm, a 20-year-old German on the Houston women’s golf team, a bevy of exemptions for next season. She’s now in the Evian Championship, U.S. Women’s Open and the brand new Augusta National Women’s Amateur Championship.

“I’m thrilled to be the champion of course, everyone loves to win,” she said. “I love when I can rely on my game, when my strengths are actually my strengths and I’ve hit my iron shots close all week. So, I’m content with myself.”

The victory — she was the first German to win since 1893 — was also a testament to Harm’s perseverance. On May 3, 2013, she went for a morning jog and was struck by a drunk driver. She was 15 at the time. Harm broke several bones and had a collapsed lung and head injuries. She was in a coma for a few days.

“I was pretty much dead,” she told the Houston Chronicle in 2016.

Facing a long road back, Harm rehabilitated and beat the odds, and she was even able to continue her climb as one of the top amateur golfers in the country. She’s currently the 33rd-ranked women’s amateur in the world.

A couple of years ago Harm posted the below photo to her Instagram, saying it was the three-year anniversary of “my car accident that almost killed me. … Here is a big and special THANK YOU to everybody who was by my side on my way back in golf and in all other parts of life.”