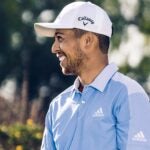 Xander Schauffele contended all week at the CJ Cup at Shadow Creek.

When Xander Schauffele burst into the lead with a 64 on Friday at the CJ Cup, I was immediately transported back a few weeks to something Schauffele said during our sitdown ‘Drop Zone’ podcast interview, held at the tail end of an Adidas photoshoot in San Diego.

He was talking about the short list of guys who could bring their ‘A’ game to an event and absolutely demolish the field. He mentioned Bryson DeChambeau, who just crushed his U.S. competition. He added world No. 1 Dustin Johnson, who shot 30 under at TPC Boston. And he mentioned Rory McIlroy, too, who owns a number of signature dominant victories.

The logical follow-up was this: Should we put Schauffele himself on that list?

“I personally would,” he said with his signature quiet confidence.

For a moment mid-week at Shadow Creek, it looked like Schauffele might take the lead and run away to hide with the CJ Cup. Win or not, here are five things I learned from sitting down with Xander, whose first name we’ll use here, because it’s a great name and ’twas an informal conversation.

(Oh, and listen to the interview! On Apple Podcasts, Spotify, Podbean, Google Podcasts or wherever you listen to your pods.)

1. He saw one of golf’s most iconic moments in person.

Xander is from San Diego. Did he see any of Tiger Woods’ triumphant 2008 U.S. Open victory in person?

As it turns out, Xander was there to witness Woods’ 72nd-hole putt, standing on a tree stump back in the fairway as that fateful birdie putt found the edge of the hole.

Torrey Pines was his home course in high school, which meant that this was a particularly fond memory. It just hasn’t been as kind to him since he turned pro; Schauffele has been uncharacteristically uneven in his showings at the Farmers Insurance Open at Torrey. On the other hand, he’s finished in the top 6 in every U.S. Open he’s played, so when the U.S. Open comes to Torrey next summer, there’s plenty of reason for optimism.

2. He was happy to call out his interviewees.

This one was on me. I was explaining that my co-host Sean Zak and I had played Torrey Pines the day before the interview from the U.S. Open tees, some 7900 yards or so, and was trying to put that in context. Sean’s a 10 or so handicap, I said.

Xander looked over at me. “What about you?”

“I’m like, a fake +4 handicap,” I said, trying to explain my golf game, which I’m asked about plenty, given my occupation, but still don’t have a proper answer to. I’ve started posting scores in the last year, and some of them are good scores, but my handicap generally feels too low for my game. That was the message I was trying to convey, at least.

Xander was rightly skeptical, and happy to share that skepticism.

Suddenly I was the one answering the questions — Xander was ready to mix it up. I liked that.

Oh, and for the record, the worst part of this is I wasn’t even a +4. I think I was a +3.2 at the time, so I was rounding up, either subconsciously or to seem cool for Xander — I’m not sure which but either way, somewhat pathetic. This bullet says far more about me than it does about Xander. On to No. 3.

3. He’s got some shade to throw Jupiter’s way.

“They can keep their Jupe Crew over there, those are real pros,” Xander said lightheartedly of the south Florida troupe of Tour pros based in the greater Jupiter area. “We’ve got the blue-collar pros here in San Diego. It’s more down to earth, It means more to us here than whatever they play for over there.

Part of being in the San Diego golf scene is mixing it up with some of the other local pros — including one high-profile left-hander.

“Just recently, quarantine, I started to play with Phil quite a bit,” Xander said. He’s been particularly interested in improving his scrambling from the rough, and who better to watch than Mickelson?

“We’ve had a few fun matches here in SD,” Xander said. Pressed for details, he admitted that he’d gotten on a hot streak against Lefty. “It was like 64, 63, 63,” he said of a recent stretch of golf between him and Mickelson. But Schauffele, ever self-deprecating, insisted that he’d played well at home and had peaked early before the real events began.

“I saw him shoot 10 under in the first round of the Champions Tour event,” Xander said. “I played with him the week before that, we played the Farms, I’ve been absolutely waxing him playing him, and then he makes 11 birdies and an eagle, so I got absolutely rinsed right before my tournament schedule.” The rest of the crew includes Charley Hoffman and assorted mini-tour or local players — anyone who shows up with game, basically. Deep pockets aren’t a requirement, either; while Xander-Phil showdowns likely have a higher dollar value attached, he insists he’ll still play the occasional $5 Nassau. “Sometimes it’s 10-10-20 now,” he said, laughing. Big money.

4. His expectations have changed.

Schauffele has mentioned in recent months how he hasn’t been playing very well, which came as news to the rest of the golf world because he hasn’t missed a cut since January and finished outside the top 25 just twice all last Tour season. Safe to say he’s got some lofty expectations.

“I guess I’d be lying if I said they didn’t change,” he said. While he hasn’t necessarily changed his approach to the game, he’s at the point in his career where a backdoor top 25 finish doesn’t do much to impress himself.

There’s an extra challenge that comes with higher expectations, of course: “It can make losing worse,” he said. “But it’s all in good fun.”

5. He wants in on that top tier of Tour pros.

Back to the original thought: There’s an upper, upper echelon on the PGA Tour, and Xander wants in. How many players belong there whose “on” is particularly scary?

“Just a couple,” he said. “I think it’s really that Dustin’s in the tiniest percentage on Tour of guys who can hit it really far, so it’s all about hitting it really far these days. Bryson really exposed our game of golf last week at the U.S. Open; he’s up there, he’s singlehandedly created that for himself. If he’s on with the putter, everything else, it’s going to be almost impossible to touch him. But obviously when you swing it 140 mph and you’re a little off, that ball’s going to go off the planet. People don’t realize that part of it; he’s that good.”

In addition to DeChambeau, and Johnson, Xander cited Rory McIlroy (“if everything’s firing on every cylinder, you’ve gotta really be at your best to catch him”) and then came the big question: should we put him in that conversation?

“I personally would, I feel like I just haven’t in my career fired on all cylinders during a tournament, like, something’s always been imssing — which is how golf goes.”

I pointed out that Schauffele was sneaky long, and while he agreed with the assessment made it clear that there’s still a chasm between his driving ceiling and that of DeChambeau.

But Schauffele is still among the game’s best drivers; he was No. 8 in strokes gained off the tee last season. Add in the fact that he’s a top-40 player in every major strokes category — no small feat — and we can expect plenty more of Schauffele at the top of the leaderboard.

You can listen to the entire interview with Xander Schauffele below, on Apple Podcasts or wherever you listen to your podcasts. Don’t be shy about leaving a rating or review, either — those go a long way. Enjoy!