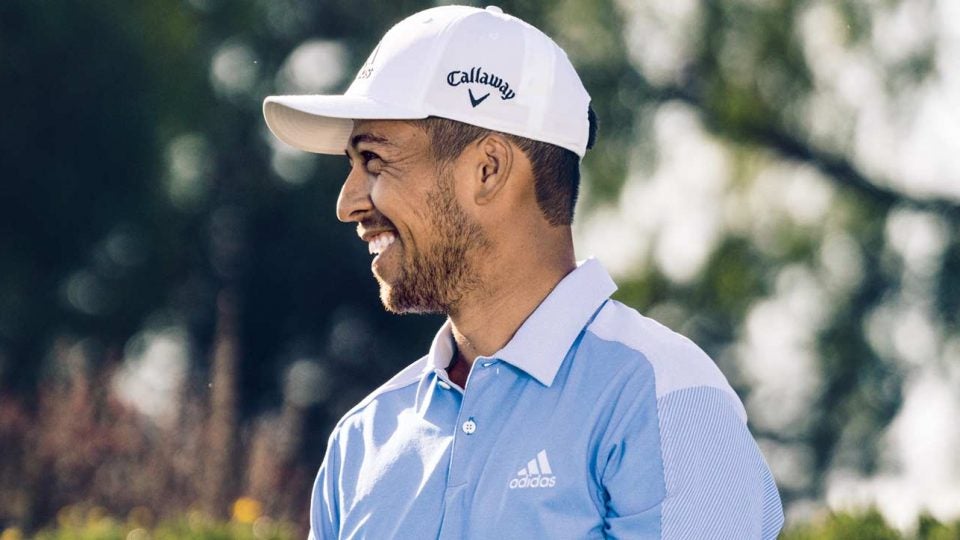 On Monday of the Waste Management Phoenix Open, an unassuming golfer in an Adidas polo and slacks hit wedge shots into a green at TPC Scottsdale. One and another and another. Looking on, a member of the grounds crew nodded in approval.

“You playing in the tournament this week?”

Xander Schauffele laughs as he recounts the story. “My dad always taught me to let the clubs talk,” he says. “So if people don’t know who I am, I guess I’m just not playing well enough.” 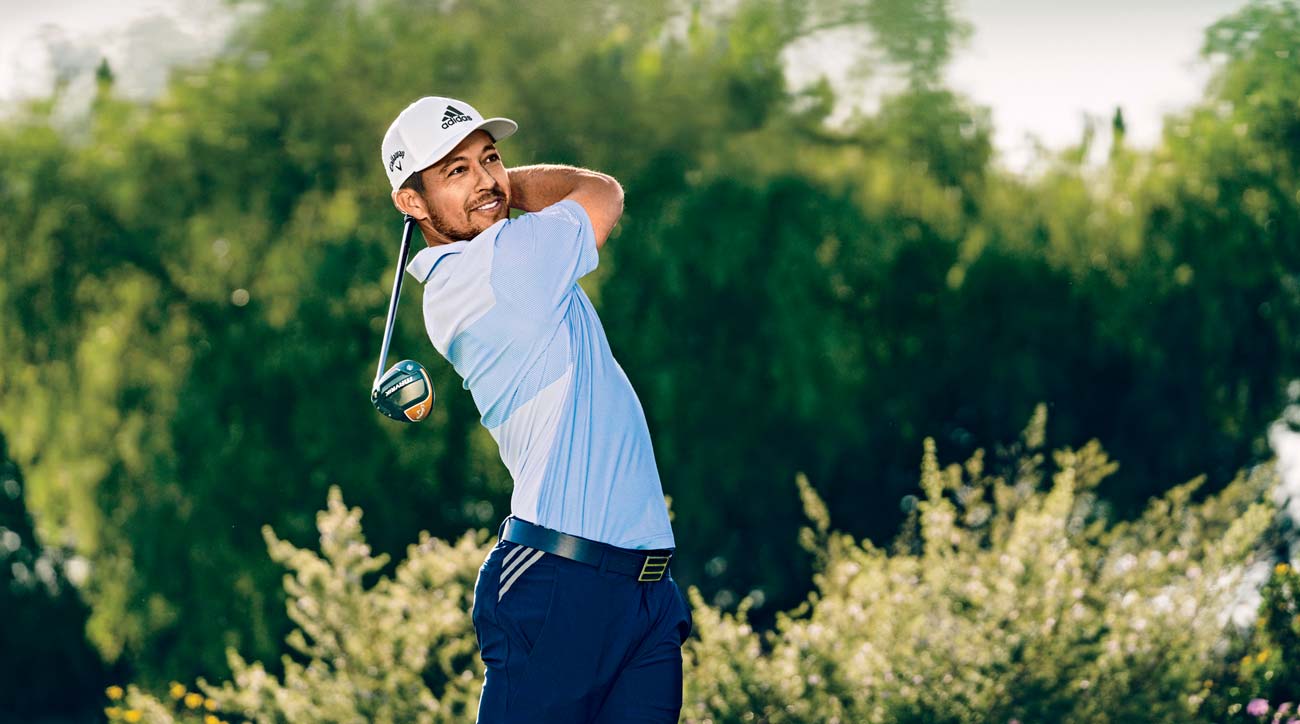 That assessment sells himself short. Schauffele, 26, is the 11th-ranked golfer in the world. He’s won four times in three seasons on the PGA Tour, racked up 20 top-10 finishes and shown a penchant for the big stage, posting five top-6 finishes in 11 major starts. So his decision to tell that story is a revealing one. There must be something comforting about those last vestiges of anonymity for the self-deprecating Schauffele, whose profile rises every day.

If Schauffele feels like he’s still coming out of the shadows, that makes sense. Three players who graduated high school the same year as Schauffele have won PGA Tour Rookie of the Year honors (Jordan Spieth in 2013, Daniel Berger in 2015 and Emiliano Grillo in 2016) before he’d even made it to the bigs. Another class of ’11 grad, Justin Thomas, won a major in Xander’s rookie year and hit world No. 1 shortly thereafter.

But Schauffele’s path was never a sure thing. He grew up in San Diego, the second son to immigrant parents: his German-French father Stefan and his Taiwanese mother Ping-Yi Chen. They didn’t have money to pay for lessons or to travel the AJGA circuit (“a money grab,” says Stefan) so Xander learned from his father, an intense competitor whose Olympic decathlete dreams were wrecked by a drunk driver some decades before. Stefan was tough on his son, and his son was tough on himself.

Largely ignored by college coaches, Xander went from Scripps Ranch High to Long Beach State before transferring to San Diego State, where he set scoring records and graduated with a social sciences degree. In 2016, he played a full season on the Korn Ferry tour, where he missed seven of his first 10 cuts. Eventually, he got more comfortable and ran off a series of late-season top-10s to earn his PGA Tour card. 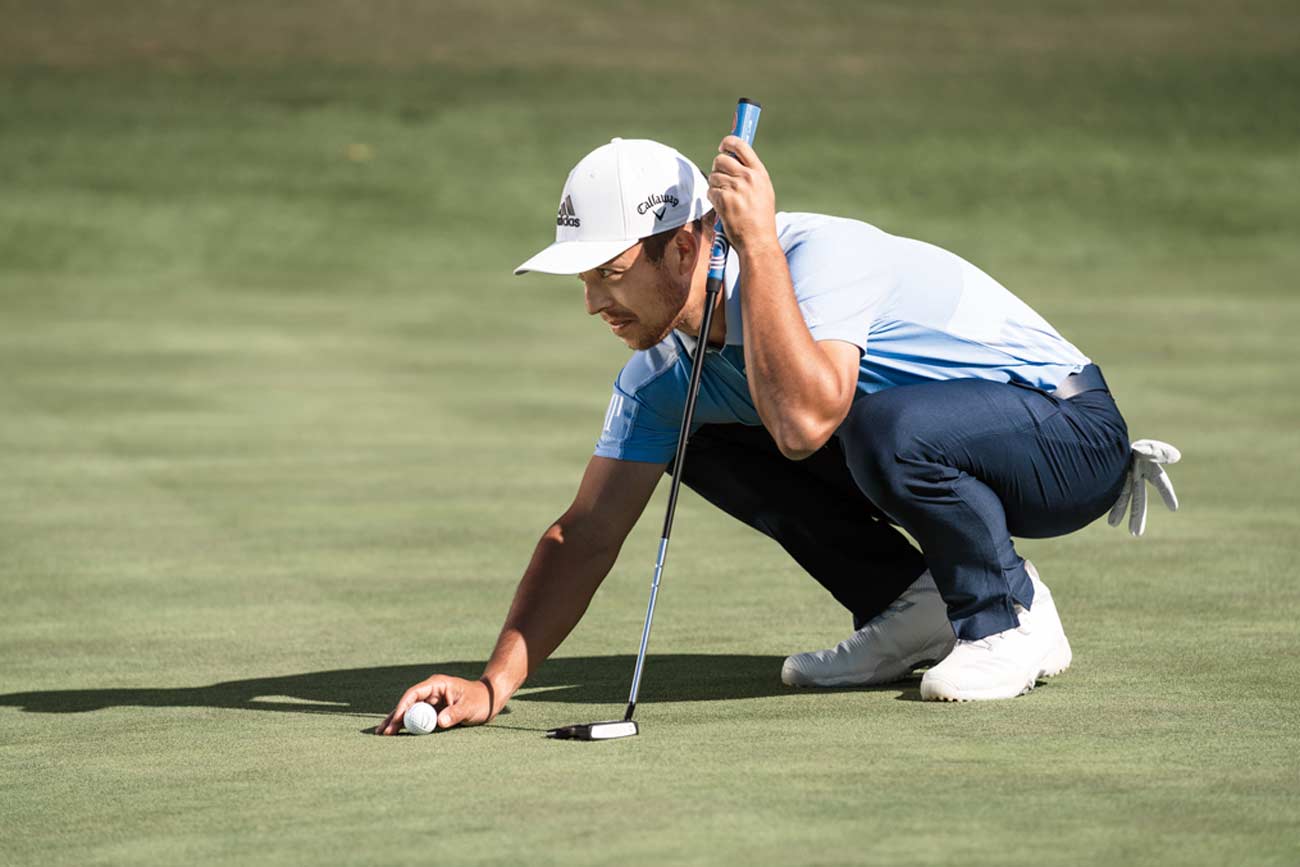 Despite his success, doubt followed him. Looking back, Schauffele wishes he could give his younger self some assurance. You’re good enough. Don’t panic.

No such luck. “I had a lot of emotions floating around about not belonging,” he says. “And the Tour shocks your system — at least it did for me.” The turning point came in 2017 at U.S. Open sectional qualifying, where he was paired with Steve Stricker at a site in Memphis. “Seeing a legend like Strick grinding in a Monday qualifier was so cool,” Schauffele remembers. After shooting 67–65 to claim medalist honors, Stricker sat Schauffele down.

“He gave me some words of confidence and wisdom,” he says. “That was so important.”

Schauffele made it through a five-for-two playoff to earn his way into his first major: the U.S. Open at Erin Hills, and had a career week, finishing T5. Three starts later, he won at the Greenbrier. Relief washed over him.

“You don’t really know until you know, and that week really did it. ‘Okay, you won. I think you can play out here now, kid,’ ” Schauffele says. He’d complete his ascension two months later, surprising everyone by winning the Tour Championship and locking up Rookie of the Year honors. 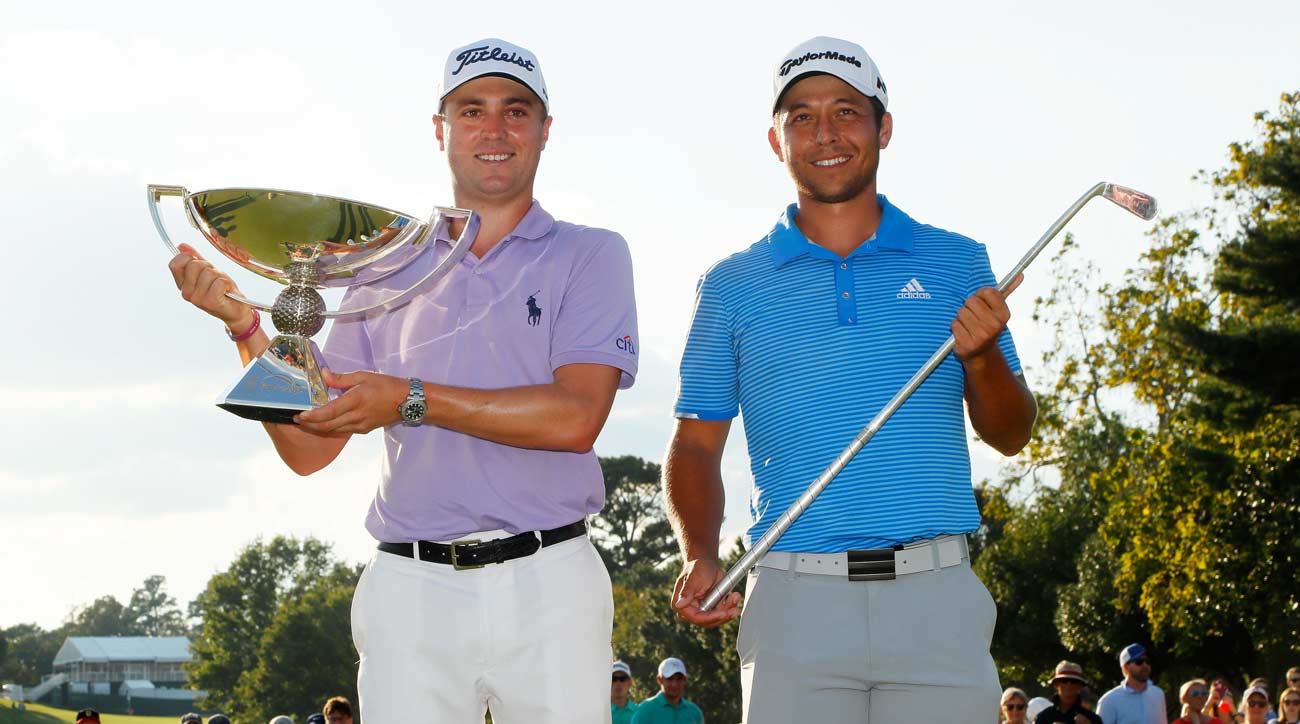 Success reaffirmed something Stefan had always tried to instill in his son: Even in the copycat world of pro golf, be yourself.

Consider that six of the eight players ahead of him in the world ranking live within miles of each other in Jupiter, Fla., pro golf’s capital of the world. But not Xander, one of the few young Tour pros left in California. That’s where his people are. His parents, his older brother Nico, his longtime girlfriend Maya Lowe, his mentor Charley Hoffman, his caddie Austin Kaiser, his San Diego State teammates. 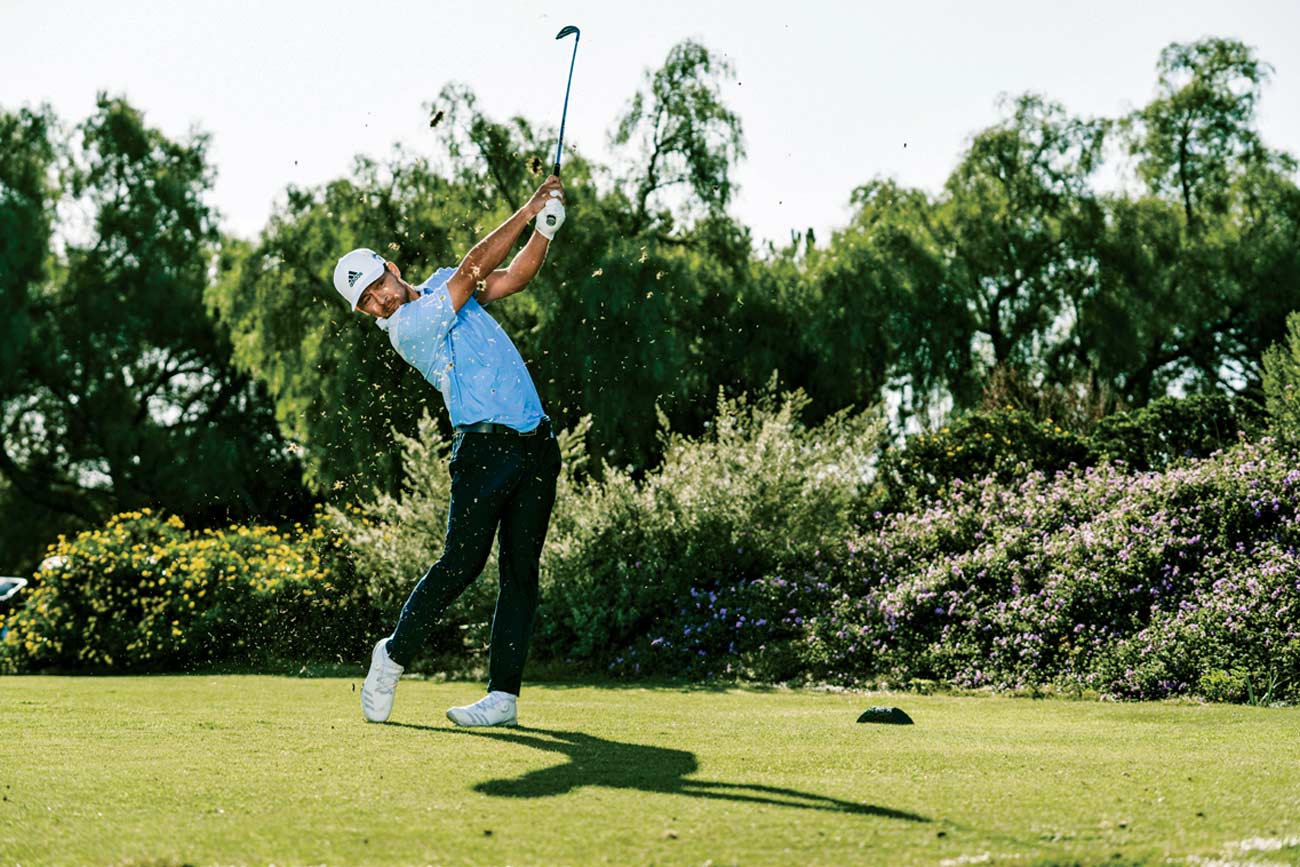 Consider, too, that despite eight-figure career earnings, Schauffele still drives a Toyota Camry he bought during his Korn Ferry season. He bought a Tesla for Lowe, he said, “to do a little something for the environment.” Most pros with Schauffele’s bank account wouldn’t be caught dead near a Camry, nor would they make voluntary mention of the environment — nor tolerate California’s state taxes, for that matter.

Staying in San Diego also means staying close to Callaway, his equipment manufacturer since the start of 2018. As Schauffele has found his voice and confidence, he’s taken control of exactly what he wants in his bag.

For a guy who was raised largely tech-free — Stefan didn’t let him watch his swing on video until he was 19 — he’s adapted well to the combo of art and science demanded at the game’s top level. “He’s particular, but in a constructive way,” says Dean Teykl, Schauffele’s go-to guy at Callaway. “He knows immediately; he’s really good at saying ‘that feels good’ or ‘that’s not gonna work at all.’ ”

For Schauffele, golf ball fitting took the longest. “Every pro has to decide what they want from their ball,” he says. He took Callaway’s new Chrome Soft line out for a combine, shaping shots, hitting every club, chipping, putting. His specific demand was for his spin rates to stay up when hitting knockdown irons.

With the driver, Schauffele got involved even earlier. Callaway’s engineers consulted him on what would become the new Mavrik, from the molding of the head to where the mass sits on the face. When he got a prototype in hand last fall, just before his first-ever Presidents Cup, his decision was simple.

“I kind of kept it on the down-low, just because I didn’t want anybody to get concerned that I was throwing a new driver in on the spot, but it was sort of love at first sight,” Schauffele says. “Plus, I’d been working with them on the design forever, so it’s not like it was brand new.” 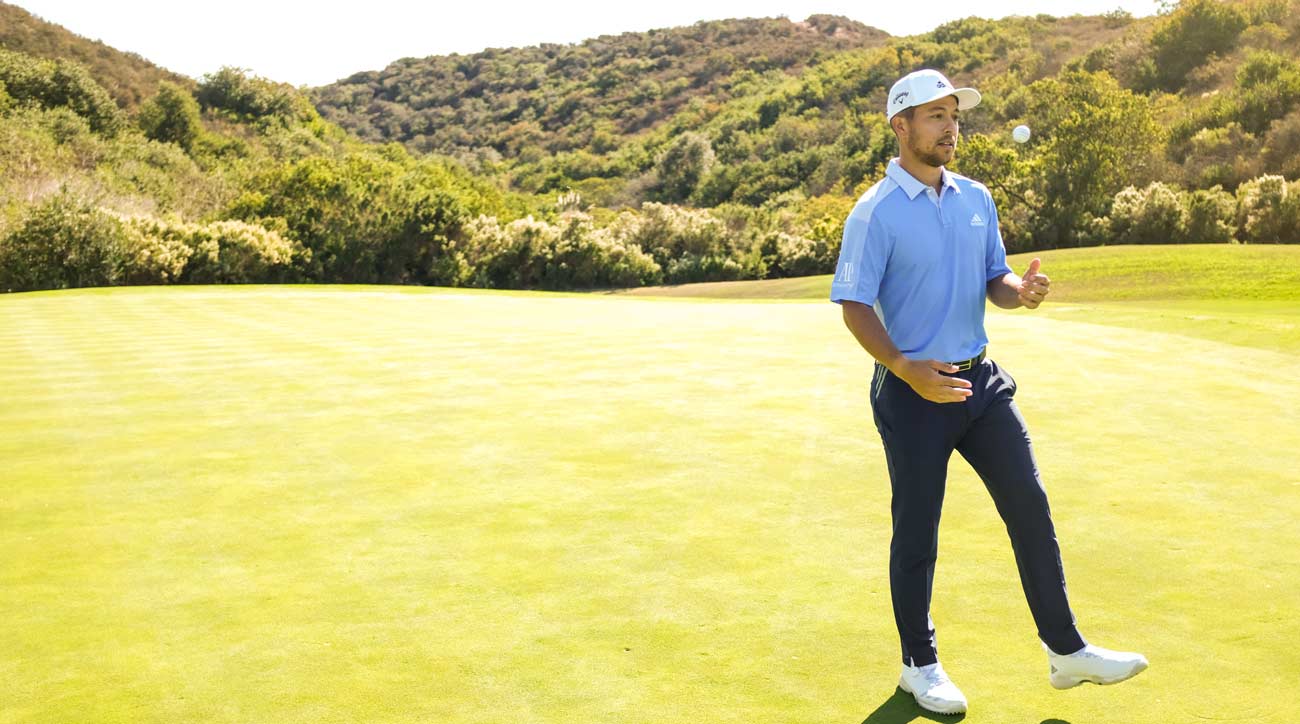 Captain Tiger Woods trusted Schauffele, a U.S. Team rookie, to play all five sessions. He went 3–2, including a takedown of Adam Scott in a pivotal Sunday singles match.

The entire experience was an eye-opener. “I definitely felt like I got a lot closer to those guys,” Schauffele says. He enjoyed doing group media, sitting down for big team dinners and sharing the emotions of the competition. “Sad, fun, happy — it was all together as a team, which we don’t get very often in this sport.”

Post-Cup, SoCal native-turned-Floridian Patrick Cantlay “sends me Zillow listings in Jupiter probably once a day,” Schauffele says. But he has no plans to join the Jupe Crew. “If I worked in a cubicle, I wouldn’t want to leave work and see all 20 people from my office when I got home.”

Schauffele has come out firing in the new Tour season, notching two runner-up finishes and four top-10s in five starts. He’s finding more fairways than ever and ranks third in Strokes Gained tee-to-green. Any chance at anonymity is already gone.

“I want to get to world No. 1,” he says with certainty. “I want to win multiple majors. Plus, I hate losing — like, I really hate losing. On some basic level that’s what gets me out of bed in the morning.”