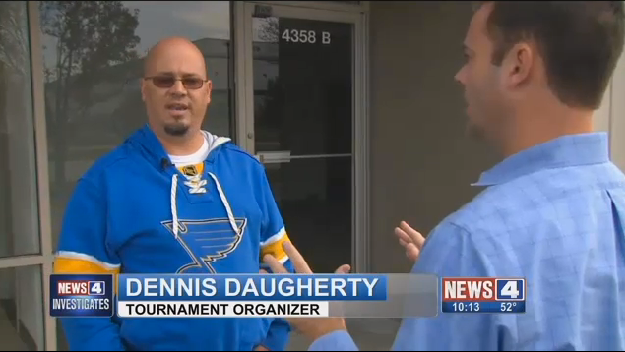 Dennis Daugherty is being charged with deceptive practice after organizing an event billed as charity for Make-A-Wish.
KMOV

A “charity” golf outing in Illinois last month that claimed to benefit the Make-A-Wish Foundation reportedly featured some raunchy entertainment: naked women and live sex acts, according to a report from KMOV News 4 in St. Louis.

The station acquired video and photographic evidence of the lurid activity at a public course in Columbia, Illinois, but the event organizer said that he was not aware of any sex acts occurring at the event. “It’s cute girls in bikinis serving drinks, that’s it,” said the organizer, Dennis Daugherty.

According to a player who was at the event, “more than a dozen women were at the tournament, with some performing sex acts for cash.”

Daugherty said that the event did not raise any funds for Make-A-Wish because he was unable to attract enough participants. Columbia police have charged Daugherty with deceptive practice.

A Make-A-Wish spokesman told the station that the event was not licensed to use the charity’s name for fundraising activities.