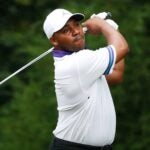 Harold Varner III shot a 62 on Thursday at the 2020 Wyndham Championship.

The opening day at the 2020 Wyndham Championship saw a ton of birdies flying across the course at Sedgefield Country Club, setting up an exciting Round 2. Here’s everything you need to know to watch the second round.

Look out for Harold Varner III. The 29-year-old shot a blistering eight-under 62 on Thursday to take the early lead at the Wyndham Championship. Despite having solid success on Tour in the past, Varner is still looking for his first Tour victory, and this week would be as good as any to enter the winner’s circle for the first time.

Varner tees off at 1:35 p.m. ET alongside Matt Every and Rory Sabbatini. Thirty minutes earlier, four-time major champion Brooks Koepka will start his second round, and he will need a good one. Koepka’s struggles that began Sunday at the PGA Championship continued on Thursday at the Wyndham, where he shot a two-over 72.

Another proven major champion who needs to go low on Friday to make the cut is Koepka’s playing partner, Jordan Spieth. Spieth fared better than Koepka on day one, but not by much. Spieth scrounged out a 70 when others pros were going low.

Here’s all the information you need to watch Friday’s second round of the 2020 Wyndham Championship.

How to watch Wyndham Championship Round 2 on TV

Golf Channel will have the action for the second round of the 2020 Wyndham Championship and will air four hours of coverage on Friday, 2-6 p.m. ET.

How to watch Wyndham Championship Round 2 online

You can stream the complete second round Golf Channel broadcast of the Wyndham Championship on golfchannel.com. Fans can also view Featured Group coverage of the opening round all day Friday via PGA Tour Live, though you will need a subscription to access both options.