Harold Varner explains the costly 129-yard drive that nobody saw 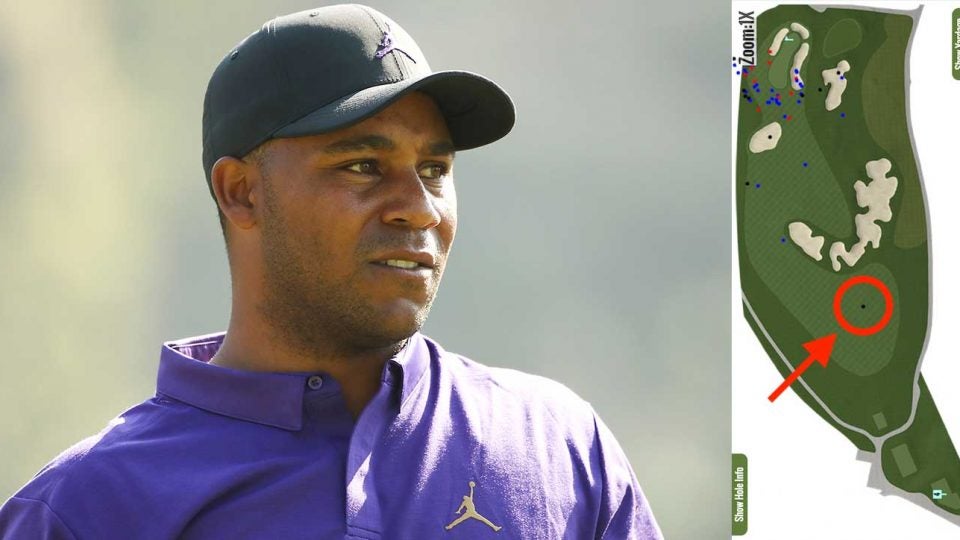 Harold Varner's tee shot on No. 10 at Riviera left something to be desired.
Getty Images

Tournament co-leader Harold Varner had just hit his tee shot, but for the spectators lining the ropes down by the green the whereabouts of that ball remained a mystery. Viewers at home were similarly unaware of Varner’s whereabouts — CBS was in a commercial break.

Then Varner’s caddie Ray Farnell started pacing off a yardage from a particularly strange spot: in the fairway short of the hole’s first set of bunkers. It takes about 145 yards to get to those bunkers, but Varner’s tee shot had only traveled 129. You can see the outlier in the hole’s ShotLink data below; just one other tee shot at No. 10 traveled less than 200 yards (Brendan Todd hit one 190 on Sunday).

Harold Varner III's "fairway hit" stat on No. 10 at Riviera will be misleading.

“I don’t know,” Varner said after his round. “I just know I missed it, I missed the ball. I couldn’t tell you what exactly happened. I just know that I hit the dirt before the ball.”

Playing partner Joel Dahmen described it as a chunk. As CBS cut to Varner in the fairway, announcer Trevor Immelman told viewers that he’d topped it. Viewers raged on Twitter at the lack of replay; midway through the back nine, they eventually replayed Varner’s tee shot, but the chunk/top debate was never quite settled. For my, I’d guess it was a drop-kicked three wood — sort of a chunk-top combination.

Still can’t tell – did Varner chunk it? Top it? I think maybe both? A good ol’ drop-kick pic.twitter.com/8hC9CTdgdI

Things only got harder from there. Varner was left with a 177-yard approach from the fairway, which would be plenty doable on most greens but basically impossible on No. 10, which slopes away into an extremely penal bunker.

“Yeah, I was screwed pretty much,” he said. “Yeah, it’s not like you can just hit the next one on the green and be like, all right, salvage it.”

His second shot flew long left, and he compounded that by sending his chip shot over the green and into the bunker on the far side. One bunker shot and two putts later, Varner was walking off the green with a shell-shocked double bogey.

It’s not clear whether this makes it better or worse, but Varner says this isn’t the first time this has happened. “I’ve actually done it before, which is funny enough. I did it in Korea, same exact thing, same exact wind,” he said.

After the double at 10, Varner couldn’t regain his mojo down the stretch. He bogeyed 11, 14 and 18 to finish off a 3-over 74 that left him T13. He insisted that Riviera’s difficult conditions were to blame, rather than any pressure or momentum.

“Nothing changed, but my score definitely did,” he said. “Yeah, it is what it is. I’m just going to, you know, I just keep getting better and that’s the goal in everything, have a chance. I had a really good chance.”