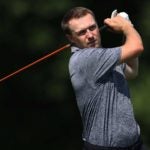 A hat-free Jordan Spieth pictured on Wednesday at the 2020 WorkDay Charity Open.

The PGA Tour begins its two-week stint at Muirfield Village Golf Club on Thursday, with the 2020 WorkDay Charity Open. Here’s everything you need to know to watch the first round.

Previewing the WorkDay Charity Open Round 1

Jordan Spieth is in the field again this week at Muirfield Village, still trying to resurrect the game that won him three majors in quick succession just a few years ago. The 26-year-old has had moments of greatness since the PGA Tour returned to action in early June, but he’s been unable to keep it going for four straight rounds. He’ll have another chance to get off to a strong start in Thursday’s opening round when he tees off at 1:10 p.m. alongside Phil Mickelson and Patrick Cantlay.

Spieth will have to contend with a host of top pros to get back to the winner’s circle. Spieth’s close friend Justin Thomas, the current World No. 5, is the betting favorite this week. But his first-round playing partner Brooks Koepka won’t back down without a fight. They will begin the opening round at the WorkDay at 7:45 a.m. ET alongside Jason Day.

And don’t sleep on the top-ranked golfer in the field Jon Rahm (No. 2). He’s grouped with reigning U.S. Open champ Gary Woodland and rising Tour star Viktor Hovland for Round 1.

Here’s all the information you need to watch the 2020 WorkDay Charity Open on TV or stream it online.

How to watch WorkDay Charity Open Round 1 on TV

Golf Channel has the action for the first round of the 2020 WorkDay Charity Open. They will broadcast three hours of coverage from 3-6 p.m. ET on Thursday.

How to stream the WorkDay Charity Classic Round 1 online

If you have a cable TV subscription, watching the first round of the 2020 WorkDay Charity Open online will be easy. You can catch the full first round Golf Channel broadcast on golfchannel.com. Fans can also view Featured Group coverage of the opening round all day Thursday via PGA Tour Live, though you will need an account to access the stream.