With Patrick Reed, captain Tiger Woods has a problem he hasn’t seen before 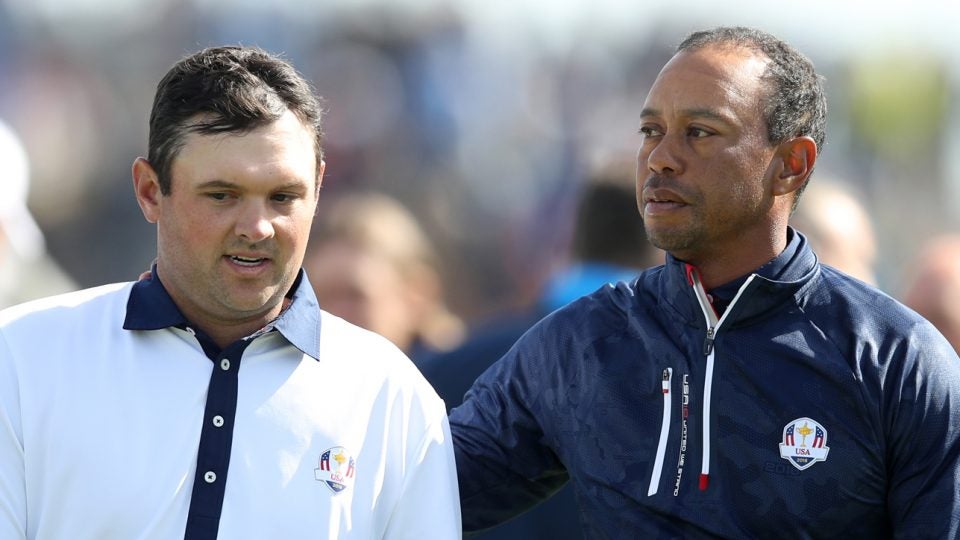 Woods looked after Reed at the 2018 Ryder Cup, but things are different this year.
Getty Images

Tiger Woods is about to embark on the hardest week of his golfing life. Prior to this, his hardest week in golf was the  2001 Masters. He had won the three previous majors, and now he had one chance to become the first person to win golf’s four majors in a row. That was tough. That was pressure. But that was all about him. Now he has to take care of the kids. Yes, even Matt Kuchar.

That’s why this whole thing — playing captain at the Presidents Cup at Royal Melbourne — will be like no other challenge he has faced in golf yet. The 2001 Masters was between Woods and his golf ball. He had a lot of training for that. How do you learn to oversee 10 other players, 12 caddies and WAGs at every turn, vice captains, support staff, Tour officials, random others — and then Pat Reed. Woods turns 44 at the end of the month. He has about 42 years of experience in putting himself first. (Being the only child of doting parents gave him a head start.) He has less than two of this Leader-of-Men thing.

At the Ryder Cup last year, Woods played with Reed in Paris for two days, put his arm around him, did everything he could to make him feel like one of the fellas, only to see Pat get all nasty about upper management and the man, Jim Furyk, who put one of the game’s most polarizing figures together with its most iconic. This year, Tiger spent one of his captain’s picks bringing Reed into the fold. And Reed went to the Hero tournament and committed what you would have to call the most brazen act of lie-improvement in any televised PGA Tour-sanctioned event.

Tournaments
Tour Confidential: Should Patrick Reed have been disqualified for his controversial rules infraction?

You likely know that Reed — on the 11th hole in the second round — had a little mound of inconvenient sand behind his ball in a waste area when he got there. He then took two practice swings that improved his lie by moving away sand. Here’s the first full sentence in the Rules of Golf: “Play the course as you find it and play the ball as it lies.” He didn’t. By doing what he did, he hurt himself, the game and everyone who plays the game by the book.

The International team is going to have a field day with Reed. As will the fans at Royal Melbourne. It will be impossible for any of his teammates to defend Reed in a meaningful way. Nobody is going to want to play with him, but somebody will. And poor Tiger Woods, who is new to this whole leadership thing, is going to have to manage this mess. As the saying goes, be careful what you wish for.

And that overstates it. Woods wasn’t overcome with desire about becoming the 2019 Presidents Cup captain. He was trying to figure out what he could still do in golf to make his life meaningful. As Adam Sandler of Los Angeles, Calif., said the other day, explaining why he goes to Lakers games when he’s a Knicks fan, “I like to get out of the house.” Of course, Woods was eventually going to captain teams — Ryder Cup teams, Presidents Cup teams, Walker Cup teams would be nice — eventually. But not in his mid-forties, when he was still chasing Big Jack and 18. Then came the summer of ’17.

If Tiger ever gives a candid reckoning of his life, the summer of 2017 will be an interesting chapter. He was still recovering from his April spinal-fusion surgery. He was home, on Jupiter Island, after completing an out-of-state residential treatment program following his Memorial Day DUI arrest. There was nothing that would suggest he would ever play competitive golf at the highest level again, but he was hoping. On Aug. 4, Jay Monahan, the PGA Tour commissioner, visited Woods and asked if he would consider being the 2019 Presidents Cup captain. Woods wasn’t interested.

Almost two months later, in late September, Woods went to the Presidents Cup at Liberty National, as an assistant captain to Steve Stricker, the U.S. captain. It was Tiger’s first extended public outing since the embarrassment of the DUI arrest. He was down about the prospects of his own play. But the warmth of which he was greeted by the rest of the team was unlike anything he had ever experienced before.

In his long prime, as a player, Woods had been the quintessential lone wolf. Now he was seeing team golf as he had never seen it before. At the 2016 Ryder Cup, as an assistant to Davis Love, he played a significant role, and that was uplifting for Woods. But the 2017 Presidents Cup experience was even more intense, because of what Woods had endured. The process to ‘yes’ had begun. Early in 2018, he asked Monahan about captaining the 2019 Presidents Cup team. He’d be the youngest captain ever in Prez Cup history, but never the matter. His new pro bono job was announced at the Arnold Palmer Invitational, with his International team counterpart, Ernie Els, sitting beside him.

Tiger putts well, pitches it well, is erratic with the driver, hits the most beautiful iron shots of anybody in the game, thinks his way around the course with Nicklaus-like intelligence. If his body holds up, he could be a contender now and again for years to come. But that’s a big if. And all it does is put off the inevitable question: what’s he going to do with the rest of his life? That is, what’s he going to do for the rest of his life that’s going to allow him to continue to feel the thrill of competition while making a contribution to the game?

If this goes well — if he really, really likes it, does well at it, enjoys being the leader — you could imagine him doing it a second time. You could imagine Woods getting two cracks as the captain of the Ryder Cup team. You can even imagine him getting two cracks at the Walker Cup team. In so doing, Woods would be making meaningful contributions to three organizations — the PGA Tour (which runs the American side of the Presidents Cup), the PGA of America (the Ryder Cup) and the USGA (the Walker Cup) — that all did so much for him, and have done so much for golf. He could have a post-playing side job that would bring him no money but a lot of satisfaction.

But first things first. He’s going to have to solve the problem of Patrick Reed. Woods has a lot of experience fixing problems of his own making. This is different.