With a mixed setup consisting of Srixon/Cleveland, Callaway, TaylorMade and Scotty Cameron gear, J.B. Holmes came from four shots back during the final round to win the Genesis Open. Holmes made a few recent changes to the bag, including the addition of Callaway’s Epic Flash Sub Zero driver at the Farmers Insurance Open and a Scotty Cameron 009M (Masterful) that received the nod at Riviera.

The Anser-style blade is made from soft carbon steel that gives the putter a soft, responsive feel preferred by a large contingent of Tour players. Holmes led the field in putting, picking up more than eight strokes with the putter. His lag putt from 51 feet, 4 inches to just 21 inches on the final hole set up a par that proved to be the difference at Riviera. 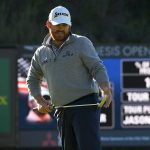 You may also like J.B. Holmes’s slow play criticized by announcers, social media

Here’s a full list of the gear Holmes used to get the job done: