J.B. Holmes has been accused of slow play before, and his name came up again when discussing the controversial topic during the final round of the Genesis Open on Sunday at Riviera Country Club.

Holmes, who shot 70 to clip Justin Thomas and win by one, was playing in the final group with Adam Scott and Thomas in what turned out to be a lengthy Sunday of golf. It was only at the 2018 Farmers Insurance Open when Luke Donald called out Holmes’s sluggish pace, and even the CBS broadcaster team got in on the action on Sunday. 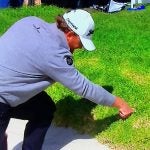 You may also like J.B. Holmes grabbed the co-lead at the Genesis Open, and then his ball disappeared

At the par-3 4th, Holmes stalked a birdie putt for more than 80 seconds.

“Here is J.B. Holmes, going through all the maps and scales and typography data that he can find,” said Jim Nantz, setting the stage.

Kostis wasn’t the only one who noticed as video circulated on social media.

One minute nineteen seconds to hit a putt my goodness https://t.co/cLNoltEhXL

And the bigger issue is what golf wants more than ANYTHING … fans. Golf yearns for fans, and young ones at that. If you were a kid randomly tuning in today and watched this guy take nearly two minutes to pull the trigger, would you stick around?

Ian Baker-Finch was next, when Holmes was taking practice swings over an approach on the 8th hole.

“This is just where J.B. takes so long to get ready, to get the feeling right,” Baker-Finch said. “It could have been done when Adam Scott was playing.”

Slow play on Tour has long been a hot topic. It was just earlier this week when Scott told Golf Digest that nothing will change because there’s too much money involved and that the Tour is an entertainment business. “Make me the victim,” Scott said. “I’ll take the penalty. The only way it’s going to work is if you enforce it.”