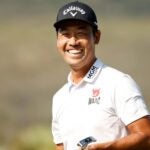 Kevin Na will watch the 43rd Ryder Cup from afar.

Among the potential wildcard picks U.S. Ryder Cup captain Steve Stricker passed on for this year’s squad was one of the game’s hottest players.

That’s five-time PGA Tour winner Kevin Na. The 37-year-old closed the regular season with a runner-up finish at the Wyndham; finished T8 and T17 in the first two playoff events, respectively; then notched a third-place finish at the Tour Championship — although when you remove the handicapping that was in place at East Lake, Na actually tied for the lowest gross score. A tidy few weeks to say the least.

The run positioned Na for his best chance yet at a spot on a Ryder Cup team but it wasn’t to be. Stricker instead elected Tony Finau, Xander Schauffele, Jordan Spieth, Harris English, Daniel Berger and Scottie Scheffler.

“It sucks. It’s disappointing,” Na told Golfweek’s Adam Schupak at the Fortinet Championship on Thursday, where Na shot a first-round 69 (T24). “[Stricker] has a tough job. I don’t take it personal. No one deserves anything. It’s a captain’s call. I respect his decision. Do I disagree? Yeah, I disagree.

“It didn’t matter what happened at the Tour Championship, [Stricker] already had his mind set. That’s my personal opinion. I think it would have been great if I played for the team. I think I could have really brought some good energy and I could’ve really contributed and disappointing that I won’t get the chance to do that.”

Most interesting were Na’s thoughts on how he could have provided value. It’s no secret that Na’s no bomber; he averages “just” 288 yards in driving distance and his SG: off-the-tee rating is an underwhelming -.253. But that’s the beauty of the Ryder Cup, especially in the foursomes format, where captains can yield positive results by pairing power with finesse. And it’s within that dynamic, Na said, that he could have been dangerous — particularly if he was teamed with the Tour’s longest hitter.

“If I had Bryson DeChambeau as my partner hitting driver, I’d be stuffing wedge in there or short irons,” Na said. “I’m a good putter, a good chipper.”

Na didn’t stop there, next picking apart a theory that has become a hot talking point among Ryder Cup observers.

“All these years you’re telling me that the U.S. team has been struggling because they had lack of length?” he said. “No, if anything it has been putting, guys able to make putts under the gun.”

Does the U.S. side have enough of those type of guys? In recent Ryder Cups they have not. With this latest team, we’ll find out next week.