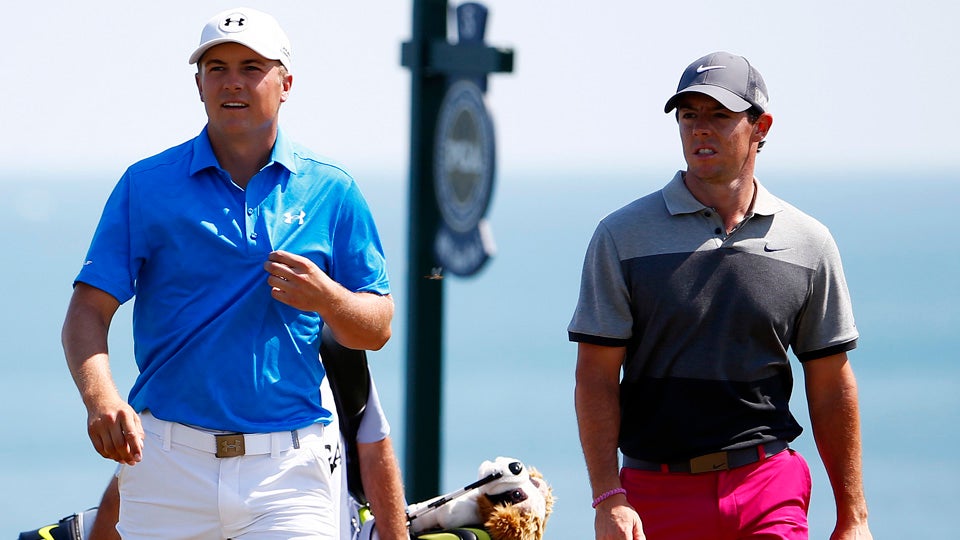 Name a better, more exciting year of golf than 2015.

What’s the matter? You can’t do it?

Sure, there are a million ways it can go wrong and you can always count on golf to be unpredictable. Did anyone last January expect Jordan Spieth to chase the Grand Slam?

There are also a million ways that 2016 can go right and I like the odds. For 15 years, we got tired of hearing the same old refrain: Tiger Woods needs a rivalry. Yes, Phil Mickelson was his rival but they never had a Duel In the Sun moment like Jack Nicklaus and Tom Watson or a U.S. Open playoff moment like Nicklaus and Arnold Palmer at Oakmont. Tiger and Phil, in fact, rarely went head-to-head in regular PGA Tour stops, much less majors.

They were rivals but they weren’t the Nicklaus-Palmer-Watson-Gary Player rivalry we hoped for.

This is why 2016 could be even better. Now we’ve got the New Big Three. With Spieth, Jason Day and Rory McIlroy, the odds are better that we’re going to have some in-your-face, anything-you-can-do-I-can-do-better big moments.

These guys have raised the bar. Rory came first, demolishing Congressional at the 2011 U.S. Open for a breakthrough win, then racking up three more majors while looking like the unchallenged successor to Tiger and Phil.

Then came last year. Spieth was ridiculous. If somebody was going to get to 19 under par for the first time in Masters history, you wouldn’t have guessed it would be Spieth, a Ben Crenshaw-like putter but not a long hitter by today’s standards. Spieth won at 18 under, tying the Masters scoring record. You know the rest of his year. He won the Open at Chambers Bay, gave it away and then won it back after Dustin Johnson gave it away on the final green. He nearly won the British Open at St. Andrews, too, and then shot 17 under at the PGA, one stroke off the tournament scoring record, only to get smoked by Day’s 20-under total, the lowest in major history.

Day, the young Aussie, came on like a freight train in a yogurt shop. At the end of the year, he combined Rory’s length with Spieth’s short game and looked like the best player in the game. He looked scary good.

All three of these guys are in their 20s. Their best years are ahead. Rory has motivation because he had a bummer summer after an ankle injury, and he watched the other two guys dominate. He will be plenty motivated to take them on.

Spieth and Day will be looking to further raise the bar.

All we have to do is get the New Big Three playing their best golf, turn ‘em loose and wait for the fireworks.

Can Day and Rory figure out Augusta? Will any of them survive Oakmont? And based on last year’s low-scoring performances, will 2016 finally be the year that somebody shoots lower than—sorry, Johnny Miller—63 in a major championship? I think it could be, but not at Oakmont. That place is nasty. Baltusrol, maybe.

RELATED: Why Does Jordan Spieth Play As If His Soul Is On Fire?

There will be sideshows, plenty of them, from Dustin Johnson (will he continue to explore the forgotten Paul Simon song, “Fifty Ways to Lose Your Major”?) to Rickie Fowler (who has singlehandedly kept orange shirts from becoming a country club cliché) to Justin Rose and Henrik Stenson and promising young guns such as Justin Thomas, Daniel Berger and others.

Even Donald Trump and his golf course empire will provide politically incorrect entertainment.

Oh, and Phil Mickelson still lives. Don’t forget that. Tiger’s back surgery could mean that the fork-sticking may begin, but Phil remains an enigma. He putted better in ’15, the stats say, but his iron play tanked. Phil ranked 177th in greens in regulation, an abysmal number for a guy who may have been the game’s best iron player when he was on.

Maybe Muirfield and winning the British Open was Phil’s Nicklaus-at-Augusta-in-’86 moment, maybe not. He is too unpredictable to count out.

So take the New Big Three, mix in a little Phil and Rickie and one or two surprises—Brooks Koepka or Patrick Rodgers, anyone?—and you’ve got grandma’s special recipe for a Holy Crap kind of golf season.

Of course, I hate to create any hype. Great Expectations usually aren’t a good idea. How did they work out for Pip in Charles Dickens’ novel? Or at any moment in history. It’s the difference between “Raiders of the Lost Ark,” which was an unexpected pleasure, and “Indiana Jones and the Temple of Doom,” which felt like a sucker punch and a dirty, rotten trick due to those unrealistic expectations.

So, you’ll probably enjoy the year more if you expect nothing in 2016 and simply hope for the best.

But, I mean, c’mon. Jordan. Jason. Rory. A Star To Be Determined.

Pull up a chair. You’ll want to watch this show from the front row.