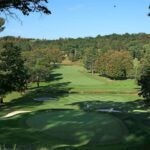 A scenic view of the par-5 17th at Saint Andrew's Golf Club in New York, where Yale and Columbia will battle once more.

The final score suggested a shellacking of the kind more often seen in football.

Yale over Columbia. Five touchdowns-worth of points separating the teams.

Except that it was not a gridiron battle.

It was a genteel competition, at Ardsley Casino (now Ardsley Country Club), near Dobbs Ferry, N.Y., and though it didn’t exactly go down to the wire, it did go down in history.

It was the first collegiate golf match ever played in the United States.

High time for a rematch, wouldn’t you say?

And so, it shall be.

On Friday, in a meeting commemorating the 125th anniversary of the birth of college golf, Yale and Columbia will go at it again.

The ‘holes-won’ format will be the same as it was in their original contest (nowadays, the standard format is ‘matches-won’). But this time, the venue will be St. Andrews Golf Club, in Hastings-on-Hudson, N.Y., the oldest continuously existing golf club in the country.

The match itself should also be much closer.

“Both teams are very competitive, and I’m sure the match will be, too,” says Rich Mueller, Columbia’s head men’s golf coach.

That it’s happening at all owes to a phone call Mueller received this summer from his counterpart at Yale, Colin Sheehan.

Sheehan mentioned that a big date was approaching. The two men saw it as a cause for celebration, and a nod to the continuity of a game that for all its changes in the modern era has remained the same, Mueller says, in its “heart and soul.”

In 1896, golf was starting to find its footing in the United States, but it enjoyed only a scant collegiate presence in the form of a handful of fledgling campus clubs.

Five schools got the invite to the Ardsley event — Columbia, Harvard, Penn, Princeton and Yale — but three failed to make it. They had their reasons. Harvard and Penn couldn’t muster enough players to field team, while Princeton, which boasted a reputedly strong roster, turned into a no-show when its players decided to attend the Harvard-Princeton football game instead.

College kids. When have they ever had their priorities straight?

Columbia came in as the rightful underdog, having only just managed to form a club. Yale, by contrast, was the first college in the country to establish an official team, already had the strong foundations of a squad that would go on to win nine consecutive national championships in the early 20th century. Two players of its players in 1896 — John Reid, Jr.  and F.C. Havemeyer — were the sons of founders of the United States Golf Association.

Like golf itself in those days, the collegiate game was not a showcase of diversity. But that, too, is different now, another cause for celebration at Friday’s anniversary match.

“What has changed are the opportunities surround the game,” Mueller says. “It’s also more accessible, provides great spectating and experiences, and a chance to be outside.”

On that note: a pre-match ceremony will be held at 11:45 a.m. EST, with tee times starting at noon. Admission is free.