PGA Championship 2019: Who wins Round 1 — the players or Bethpage Black?

The Black Course at Bethpage State Park has long been touted as one of the most difficult courses in the world, and in the two U.S. Opens played here only six total players have finished under par. To further complicate matters the course was slammed with rain earlier this week before it finally cleared up on Wednesday. It remains to be seen how the course will play and how the PGA of America will set it up, so we ask, who wins in Round 1 — the players or the Black Course?

Sean Zak, associate editor (@sean_zak): The Players! I think the PGA will go easy on them up front. And with great weather forecasted, and some remaining wetness from rain earlier this week, I’d expect a good number of guys under par after 18 holes.

Jon Wall, equipment editor (@jonathanrwall): The players, if only because the PGA of America has no intention of following the USGA’s lead and turning this into a U.S. Open lite. The rain should keep things soft this week at Bethpage, allowing guys to fire at the flag. I expect the big bombers to eat.

Michael Bamberger, senior writer: Course. Gym. Supplements. Special gum. Bat speed. This course has it all and requires it all but anybody hitting hybrids and long irons into these par-4s will have no chance. Course wins because it has already eliminated so many. 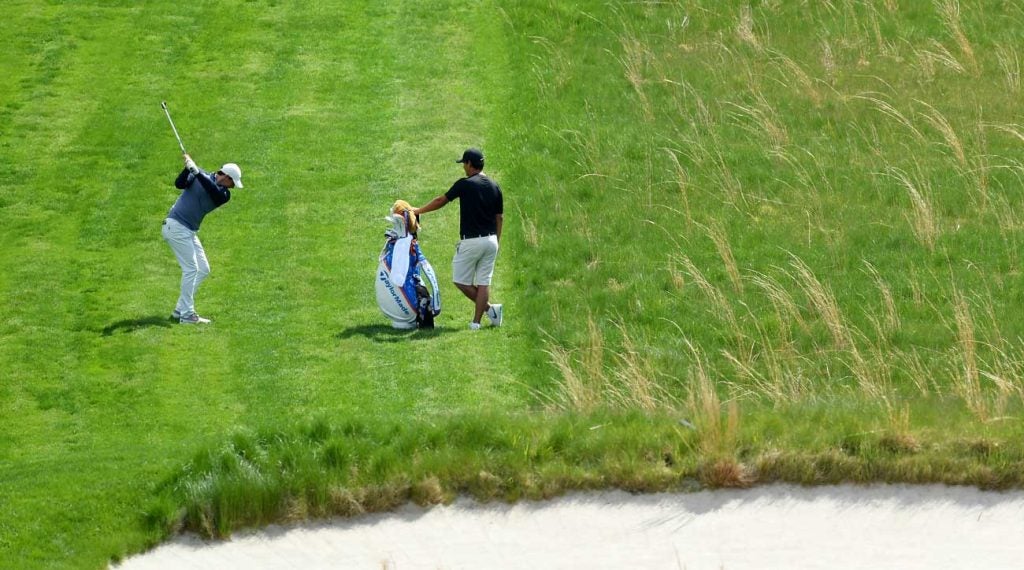 Rory McIlroy and his caddie Harry Diamond on the 18th hole at Bethpage Black.
Getty Images

Jessica Marksbury, senior editor (@jess_marksbury): I agree with Michael. There’s a warning sign on the tee for a reason. The rough is thick, and the fescue is nearly unplayable. Add the very challenging course length to that and — yikes!

Jeff Ritter, digital development editor (@jeff_ritter): The course is a monster and I’m exhausted after walking seven holes this morning. (Need to carbo load!) But the players will be declared the victors tomorrow because the greens are soft(ish) and there will be more guys under par Thursday night than at the two Bethpage U.S. Opens combined.

Luke Kerr-Dineen, instruction editor (@LukeKerrDineen): Bethpage isn’t just going to win the day, it’s going to win the week. It might not get quite as wet and cold as it was Monday and Tuesday, but the rough is juicy and the sheer size of the course makes it exhausting just to walk, let alone play for four days. Some holes are so long players can’t even reach the green. Players will try their best, but no one’s beating the Black.

Alan Shipnuck, senior writer (@alanshipnuck): These guys destroy any course with soft greens. The Black will our up a noble fight but expect to see a lot of red on the leaderboard.