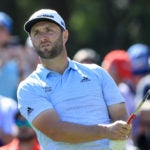 Jon Rahm was in position to take the top spot in the world ranking from Rory McIlroy at the Players Championship before it was canceled.

The PGA Tour returns June 11 after a nearly three-month shutdown due to the spread of the coronavirus. It was quite the break, but golf is back long before other sports are returning. So, what was life like on Tour before the shutdown? Let this series remind you of where we left off.

Who was in the best form?

We can pity the folks who had 2020 Masters futures bets placed in early March (and even prior to that). Those tickets are still valid, but who knows if Jon Rahm will play as well as he was in the early parts of the season?

Rahm is ranked no. 2 in the world and was threatening to take the top spot from Rory McIlroy. In fact, the two were grouped up at the Players Championship prior to the Tour season hitting pause. Rahm had won multiple European Tour events in the fall and had amassed four top 10 finishes in five 2020 starts on Tour. He was going to be one of the favorites to win the green jacket, so much so that he actually won our simulated Masters. The computers favor good form!

Beyond Rahm, Patrick Reed was also in great form. Reed likely should have won the Tournament of Champions to begin the season (he lost in a playoff to Justin Thomas) but finished in the top 10 at Torrey Pines and won at the WGC-Mexico Championship.

McIlroy was simply doing McIlroy things. He had not finished outside the top 5 in 2020 in five events. Think about that for a second. Par for the course with the no. 1 player in the world.

Marc Leishman was the man who won at Torrey Pines, thanks to a final round 65. Leishman also finished 2nd at the Arnold Palmer Invitational, which was played under some wild wind conditions. He has a solid career at Augusta National, too.

Lastly, we cannot fail to mention Adam Scott, who won in his last start of 2019 and his first start of 2020, at the Genesis Invitational. Scott, who also famously has a great career at Augusta National, had one of his best non-winning seasons in his Tour career in 2019 and has jumped all the way to No. 6 in the world ranking.