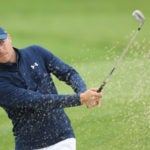 Jordan Spieth hits a shot from a bunker during a practice round at TPC Harding Park on Wednesday.

Which player needs a major victory the most?

Michael Bamberger, senior writer: Which player needs THIS week’s major? Jordan. Jordan Spieth. Then he can relax and be Jordan again. He can be Jordan for the rest of his life. He can hang with Sarazen from here to eternity.

Sean Zak, senior editor (@sean_zak): It’s easy to argue that Bryson needs a major victory — or at least a major top 10. The guy draws plenty of ire for everything he does, and winning will change all that awfully quickly.

Alan Shipnuck, senior writer (@alanshipnuck): Ooooh, both good answers. But I’m going with Rory. It’s impossible to believe that the reigning POY has now gone six full years in the heart of his prime without a major. This is a course where he has already won, with a setup that puts a premium on driving the ball, in weather that evokes Northern Ireland. It’s not now or never, but it’s certainly time for McIlory to get it done.

Josh Sens, senior writer (@JoshSens): I can’t top those answers, only expand on them. Often, the player considered most in need of a major is the golfer seen as the best player without one. At this moment, that would be Jon Rahm.

Alan Bastable, executive editor (@alan_bastable): I *can* top these answers! It’s Jason Day! The former world No. 1 was in the hunt in virtually every major in 2015 and ‘16. Since then? Tough sledding on account of swing woes, personal troubles and endless injuries and illnesses. Three top 10s in his past three starts hint this could be his bounceback week. Seize the Day!

James Colgan, assistant editor (@JamesColgan26): He might be the least likely of anyone on this list to win, but it seems we’re past the point of the pressure mounting on Rickie Fowler to snag a major. At 31, he’s hardly out of time, but he’s not exactly a spring chicken anymore, either. Now’s the time for one of golf’s most notable faces to snag a big one, if he’s ever going to.

Zephyr Melton, assistant editor (@zephyrmelton): Well, it looks as though all the obvious answers have been taken, so I’ll go off the beaten path a little. Let’s go with Tommy Fleetwood. He’s got three top-five finishes in majors over the past three years, but he never quite gets it done. Plus a win would (finally) get him a win on American soil, which is something he needs to put himself in the ranks of the upper echelon of the game’s stars.

Dylan Dethier, senior writer (@dylan_dethier): I’ll parse words here and say that Tiger Woods is the one who needs this major the most. Not because he’s got anything to prove to anyone — just because he has always needed majors when every other golfer has just badly wanted them. That’s the trait that has gotten him 15 of ’em.

Nick Piastowski, senior editor (@nickpia): A victory, period, would be terrific for Tony Finau. No wins since 2016. And 30 – 30! – top 10s over that time. A victory in a major would be quite the way to end that streak. He has the game to do it.

On Day 2 at Winged Foot, the U.S. Open started to feel a lot more like a U.S. Open