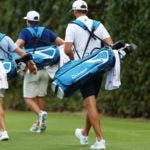 The skins game gave us something we desperately needed: golf, featuring Tour stars.

Golf* is back. The play was spotty, the silence deafening on a fan-less course, the call-ins to the telecast downright distracting, but Sunday’s TaylorMade Driving Relief skins game gave us exactly what we all desperately needed: golf, featuring four telegenic Tour stars. Not that it really matters, but the heavyweight duo of Rory McIlroy-Dustin Johnson won $1.85 million to $1.15 for the upstart team of Rickie Fowler and Matt Wolff, with all of it going to charity in the ongoing battle against coronavirus. Including various bonuses and viewer donations, more than $5.5 million was raised for a host of good causes. The real winners were fans everywhere, who got to sink into their couches on a Sunday afternoon to watch golf, just as in the old days.

Fowler rode a hot putter to put on the best show, not surprising for a three-time Seminole Pro-Member champ and practice-round legend on Tour. Wolff, who at 21 has by far the thinnest resume of the players on display, looked nervy throughout but hit a couple of missiles to win the long-drive bonuses on two different holes. Johnson fought his putter and driver throughout, drowning three balls in water hazards and making only one birdie in the first 13 holes, on No. 3, though it was worth a trio of skins with the carryovers.

Still, he entertained with his lightning-fast pace of play and manifest awkwardness in having to carry his own bag. (Among the social distancing protocols in place was the banning of caddies.) McIlroy enjoyed the most course knowledge at the celebrated Donald Ross creation, because his father Gerry is a member at Seminole, but Rory’s game was clearly rusty and he missed out on various scoring chances. “It’s different when you’re not playing for your own money but playing for a cause, it starts to weigh you on a little bit,” McIlroy said.

When the last six skins were halved, the final $1.1 million was decided by playing a gimmicky closest-to-the hole contest on a manufactured 19th hole, but that’s okay. McIlroy hit a sweet little wedge shot from 120 yards through a stiff breeze to take the cake. In victory, all he could do was a few wireless high-5s and shout, “Thanks, guys!”

If the golf was a little uneven there were still many pleasures to be had, from McIlroy annihilating tee shots with ease to Fowler holing clutch putts and then pantomiming to the imaginary crowd. All of the players wore microphones. The trash-talking felt forced — witness Rory woofing about his FedEx Cup victories, of all things — but the subtle pleasures including forensic discussions after missed putts and low-key self-flagellation following mediocre shots. (Pros, they’re just like us!)

In the end, this skins game will be remembered not for any one shot or bit of woofing but for what it represented: the first step on the long road back to normalcy. As Johnson said afterward, “It was very nice to part of something so cool.”