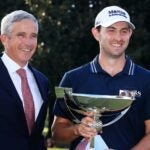 “Active inertia” is not a new concept, but it’s definitely newer than the concept of raising purses on the PGA Tour.

In 1999, MIT professor Donald Sull introduced the idea in the Harvard Business Review. As Sull put it, “Active inertia is an organization’s tendency to follow established patterns of behavior — even in response to dramatic environmental shifts. Stuck in the modes of thinking and working that brought success in the past, market leaders simply accelerate all their tried-and-true activities. In trying to dig themselves out of a hole, they just deepen it.”

What is the “hole” in the Tour’s case? It’s the amalgam of issues that potential “new” professional golf concepts powered by Premier Golf League and LIV Golf Investments think they can handle better than the folks in Ponte Vedra. What are the “tried-and-true activities” to keep the current stakeholders happy? Raising purse sizes is certainly one of them. But, “active inertia is insidious by nature,” the HBR included as a sidebar to the article. “Because it grows out of success, it often spreads unnoticed in corporations.” Could that be happening to the PGA Tour?

There’s a reason why Andy Gardiner, CEO of the PGL, invoked the concept in a recent appearance on the No Laying Up Podcast. Gardiner believes that fundamentally the PGA Tour “product” can change for the better. Better for players, better for fans, better for sponsors, better for TV rights-holders. Better for everyone besides, well, the Tour in its current form. Gardiner sees the PGA Tour as a brand that should no longer be a 501(c)(6) nonprofit organization, and he isn’t the first person to make that observation.

Taken together, the PGL and LIV Golf are a resistance of sorts that embody the “dramatic environmental shifts” as outlined in Sull’s definition of active inertia. Some of the best players in the world (or at least their agents) reportedly believe a different format of play might work better, as would guaranteed money — and a lot of it. That’s a shift. But in response, the Tour is following established patterns of behavior. Last week, Commissioner Jay Monahan alerted players to a new wave of purse money the Tour will dish out to in 2022. The Players Championship purse is rising to $20 million, the playoff event purses are up to $15 million, the entire FedEx Cup is rising to $75 million with the invitationals offering $12 million apiece. It’s a significant increase, for sure, but more money will not fundamentally change the Tour’s product.

“It boils down to the mentality of ‘If it ain’t broke, don’t fix it,’” Gardiner explained on the podcast, likening the Tour to an oil tanker ship that’s cruising along in calm waters. It’s not an easy thing to turn around, and why would you necessarily want to if the system still technically works? It surely came as no surprise to him when Golfweek reported the Tour’s future plans to host international, guaranteed-money events for the top players in the world. That move that won’t take place for another two years, at least, but is reminiscent of the World Golf Championships, which were founded back in 1996, shortly after Greg Norman first floated the idea of a competing tour.

Sull would define these purse increases and quasi-WGCs as strategic frames that have previously made the Tour successful but now are working as blinders, or the only way to do things. Is purse size the core issue at hand? Or is it something else, like the Tour schedule, which has remained largely unchanged over the years? Or the lack of control the players feel they have?

That schedule stagnancy is what Sull would describe as “processes that harden into routines,” another tenet of active inertia. The only way we’ve ever done things must be the right way of doing things, right?

As it stands, Tour players also have very little motivation to change their own processes. The Tour has instituted a scheduling bylaw in recent years that requires players to add new events they haven’t recently played, but that’s it for the Tour force-injecting newness to any of its annual tournaments. Well, besides upping the purses. Right now, the tournament directors, fans and secondary sponsors of, say, the Valspar Championship don’t really know if Brooks Koepka or Jordan Spieth will definitely show up until the week before. Should they? I know they’d like to know.

Which brings us to Sull’s third condition of active inertia: relationships. They matter deeply to the PGA Tour, but as Sull writes, “relationships can become shackles” that prohibit meaningful change.

What does that look like for the PGA Tour? You can see it in the TV broadcast. Tour sponsors pay a lot of money in the aggregate and are owed a lot of value in return, and plenty of it is delivered via live television. That means commercials but it also means CEO interviews, continual promotion of the FedEx Cup points ranking, or when your TV screen is bifurcated with live, silent golf on the left and an advertisement on the right. Relationships are vital to this exchange of value, but over time the Tour’s structure hasn’t meaningfully changed. The golf broadcast has proven to be a largely inflexible entity because of agreed-upon contracts that bind TV producers, as well as limited production budgets because of how much the networks have forked over to secure the rights deals in the first place. Who has to give in while all these relationships are met, and while the status quo is maintained? Golf fans who want more excitement and not a Sunday snooze.

The last aspect of active inertia are values, as Sull says, “the deeply held beliefs that unify and inspire its people.” As time passes, those values “harden into rigid rules and regulations that have legitimacy simply because they’re enshrined in precedent.”

Perhaps no precedent on Tour is more enshrined than its status as a charitable 501(c)(6) nonprofit. This is a good precedent, though, right? After all, the Tour has donated billions to charity over the course of more than 75 years. But throughout the last decade, that nonprofit status has been challenged by politicians because it limits the amount of money the Tour is required to pay in taxes. If the Tour was willing to drop this controversial status and follow the for-profit framework the PGL has laid out (or the path that other sports leagues have taken), paying its 200-plus members would become, at least in theory, less fraught.

As Gardiner laid out on the NLU Podcast, if golf mimicked the exciting Formula 1 racing format — in which teams sign players to contracts — it would open up fresh revenue streams for the best players in the world. (One obvious and sorely missing example: player jerseys and apparel.) Can the Tour’s impressive philanthropy record continue as an extension of such a for-profit league? I don’t see why not. But such a league would upend another layer of the Tour’s value system: the idea that most pros earn their keep, stroke by stroke, based largely on their performance. PGA Tour traditionalists would deem the current format well worth fighting for. But the 27th-ranked player may not agree with the 38th nor the 38th with the 13th. It’s tough to change precedent.

It’s tough to fight off active inertia, too. Whether or not it’s plaguing the Tour depends a bit on your view of the organization — and, adjacent to that, how much chaos a challenger can muster. (The PGL can muster a lot.) For the Tour optimist, every recent move hasn’t been active inertia but instead brilliant defense — just the Tour using its resources stylishly and appropriately. For the pessimist, it’s absolutely the wrong type of defense. It’s lazy defense. Passive defense masquerading in its aggressiveness.

For the skeptics, the concept of active inertia might feel a bit esoteric. But once you grasp what it is, it’s easy to spot just about everywhere.