Welcome to the Tiger Woods Bonus Era, where more wins are on the way

A year ago, Tiger Woods needed his win at the Tour Championship to announce that he was really, truly all the way back. What followed was as cool a scene as golf has seen: fans, thousands-strong, walking with Woods up the 18th fairway. It wasn’t just Woods who needed that moment: golf did, too.

This April, Woods needed to win the Masters, too, so that he could add a definitive signature moment to the second phase of his career. The way he reacted when that final putt dropped was a dead giveaway; Woods celebrated with such euphoria that it raised the question of whether he had ever truly enjoyed a victory before.

In the immediate Masters aftermath, Woods’ competitive future was limitless. Pundits and golf writers — including the author of this article — talked about Jack Nicklaus’s 18-major record as something comfortably back in play. But as the season wore on, reality seemed to set back in. Woods spoke of the mental fatigue he’d felt in the aftermath of the win. His health was called into question. He missed cuts at the PGA Championship and the Open Championship and never seriously contended for another win. His season ended with a whimper, going WD-T37 in the playoffs and failing to even qualify for a return to East Lake and a title defense.

But with space and perspective, that felt okay. Those two wins were enough. Arguably history’s greatest golfer had given us plenty, and for the first time, expectations for Woods seemed to match reality. We didn’t need anything more from Woods.

But now, after a commanding win at the Zozo Championship, it looks like we’re going to get more anyway. Welcome to the Tiger Woods Bonus Era.

When Woods won his first PGA Tour event, 23 Octobers ago, he wasn’t sure what to make of it. “I really can’t say what it means until I think about it more,” he said.

There’s no question what this week’s win means. This is No. 82, which means that no golfer in PGA Tour history has won more than Woods. This is Japan’s first-ever PGA Tour event, which means golf’s most global star continues to shine brighter. This means we’re guaranteed to see Tiger as a playing captain at the Presidents Cup in December. It means he’ll be a serious threat to qualify for the U.S. Olympic team next summer. More than anything, it means that Tiger still has plenty more left in the tank.

This week in Japan wasn’t some miracle late-career last hurrah. It was a dominant showing from a player in complete control of his game. Woods didn’t win because he needed to. He won because he was, for these four days, far and away the best golfer in a field that included some of the world’s best golfers. He won because he is, as it turns out, still one of the best.

The Zozo Championship was a strange event for U.S. fans to track. The brand-new tournament fell in a competitive spot in the sports schedule: the heart of football season, the beginning of the NBA season and the meat of the World Series. Even in the golf world, the tournament itself was overshadowed by a much-hyped skins game that took place in the wee hours of the preceding Monday morning. Once the event started, it progressed haltingly: Woods played no holes on Friday but 29 on Sunday, leaving an awkward seven more to tackle early Monday morning. (Although that piece of the schedule actually worked out perfectly for U.S. viewers, served up as a tasty appetizer to Sunday Night Football.)

Point is, the Zozo had faded to the background of the world’s sports consciousness, the way in-between golf tournaments often do. There was extraordinary subtext, of course, with Sam Snead’s record hanging in the balance. But this win was, in many ways, ordinary. Woods’ game looked sustainable. He drove the ball in play (T-7 in the field). He hit a ton of greens (T-3 in the field). And he putted the heck out of the ball (lowest putts per green in regulation in the field). He won’t play this well every week, but there’s no reason to think he won’t play very well, very often.

That’s a good thing. Plenty of Woods’ majesty over the years has been the miraculous moments, of course — his blowout win at the ’97 Masters, his “Better than most” putt on 17 at Sawgrass, his “In your life, have you seen anything like that?!” chip on at 16 at Augusta — but his greatness has come in the week-to-week. His elevation of the golf world has come from the competing at Warwick Hills and Torrey Pines and Firestone and Bay Hill. It’s come from the in between. That win at the Masters was an immensely satisfying, full-circle moment of redemption for Woods. This win at the Zozo was a sign that we might be seeing a lot more of this.

One question stood out from Woods’ post-win presser, from USA Today’s Steve DiMeglio, who has known Woods for most of those 82 wins: “There have been many times in your career that people have written you off. How satisfying is it to keep proving them wrong?”

Woods paused. “It’s satisfying to dig my way out of it and figure it out, figure out a way,” he said. “There are some hard times to figure it out, but I’ve come back with different games over the years, different movement patterns. This one has obviously been the most challenging, then having another procedure a couple months ago…not easy to do, but I trust my hands.” For 23 years, the talent and the relentless competitive experience have endured. The hands have, too. 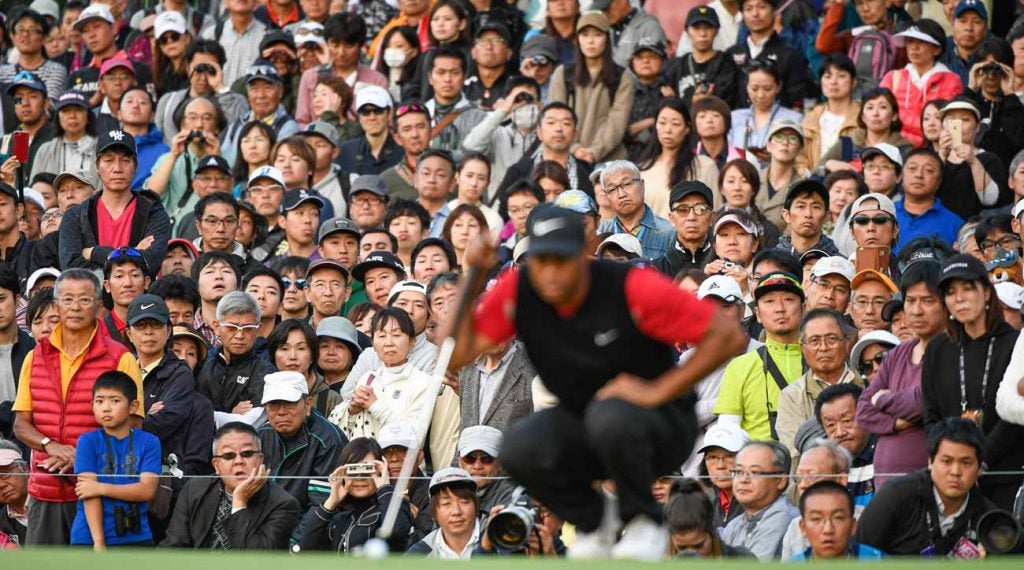 Tiger Woods won No. 82 on Sunday in front of thousands of adoring Japanese fans.
Getty Images

For his part, Tiger seems to be enjoying this new phase of his career; he showed that when he spent Friday’s rain delay with five of his closest competitors going to a movie and grabbing some pizza. That’s a sign of a different Tiger. But what he still enjoys most of all hasn’t changed, and it happened again on Monday morning in Japan: holding up the winner’s trophy.

Tiger Woods is now the owner of 82 PGA Tour wins. But what feels even clearer is that No. 83 is around the corner. It’s all gravy now, of course. This is the Bonus Era. Enjoy it.