WATCH: These up-and-downs from PGA West’s 19-foot-deep bunker are incredible

Hitting it into a greenside bunker on your approach can be a deflating experience. Just when you thought you’d have a chance at a makeable birdie or two-putt par, instead, you’re now subject to a potentially difficult lie, and it may be a struggle just to get the ball out and on the green, let alone near enough to the hole to save par.

If that scenario sounds familiar, imagine how you’d feel if missing the green resulted in facing a recovery shot from not just any greenside bunker, but the famous 19-foot-deep bunker on the 16th hole of PGA West’s Stadium course, host of this week’s The American Express. 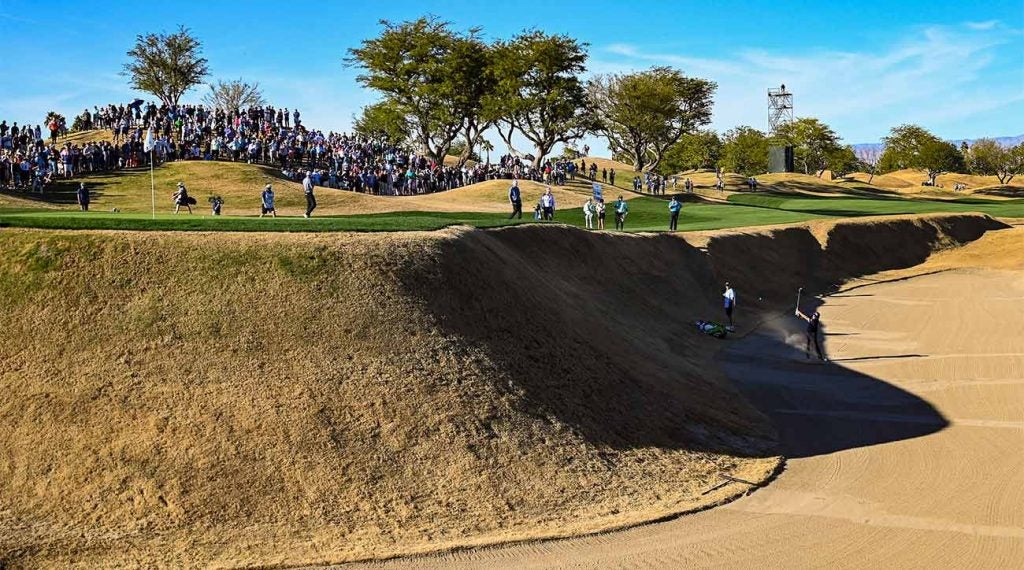 Phil Mickelson blasts out of the massive bunker left of the green on the 16th hole of PGA West's Stadium Course.
Getty Images

Talk about intimidating! Successfully executing an up-and-down from a greenside bunker, a feat more commonly known as a “sandy,” is always cause for celebration, but an up-and-down from this monstrosity in La Quinta deserves a much heartier accolade. Though it looks nearly impossible, a couple of players in the field this week have made masterful work of what looks like one of the toughest shots in golf.

During the Thursday’s first round, two-time Tour winner Chez Reavie found himself in the diabolical pit, needing an up-and-down to save par. Incredibly, he managed to do it, aided by a truly fantastic putt from off the green.

And during Friday’s second round, another two-time Tour winner, Russell Knox, hit an even better shot from nearly the same spot as Reavie. Knox needed an up-and-down to avoid a double bogey, and left himself a four-and-a-half footer, which he drained for his bogey.

I’ll be the first to start a slow-clap for those inspirational shots.

The third and fourth round of The American Express will be played this weekend, and here’s hoping there will be more highlights than lowlights from the bunker on No. 16.