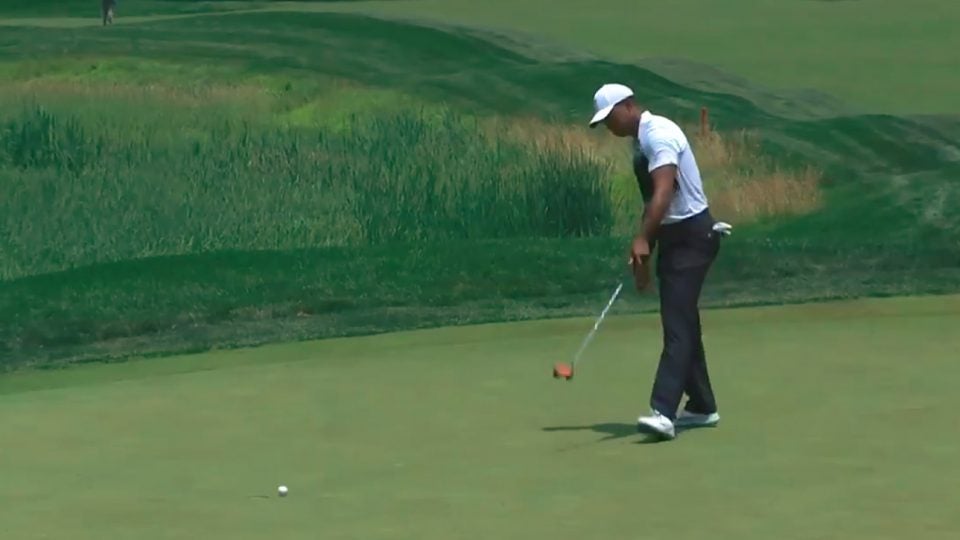 Tiger Woods makes his third birdie of the day at the 6th hole Saturday at the Quicken Loans National.

Tiger Woods’s third round at the Quicken Loans National got off to a slow start, but he turned it around quickly with an incredible string of birdies on the front nine.

Woods began the day at five under, just four shots off the lead. But an opening bogey suggested Saturday would be a tough one for Woods. Then he arrived at the 4th hole.

There, he stuck is approach to seven feet at the par-4 and rolled in the putt for his first birdie of the day.

He repeated that performance at the par-4 5th, making another mid-ranger to add a second birdie and move to six under for the tournament. He quickly picked up his ball and confidently strolled to the next tee.

Another great tee shot into the fairway at 6 preceded an approach that took an aggressive line, but one that paid off. Woods was left with 12 feet, and he raised his putter as his ball sneaked into the left side of the cup for his third birdie in a row.

Tiger has birdied three in a row.

But he wasn’t done yet. Woods smashed a 307-yard drive into the fairway at the par-4 7th hole. His wedge shot from 131 yards settled just eight feet from the cup. You can guess what happened next.

The putt gave Tiger four consecutive birdies, moving him to eight under for the tournament, just one shot off the lead.