It’s been a frustrating April for Sergio Garcia.

Two weeks after making an octuple-bogey 13 at Augusta National’s 15th hole (en route to a second-to-last place finish), Garcia arrived at the Valero Texas Open looking for a better result. But as he sat near the cut line Friday afternoon, that frustration boiled over. 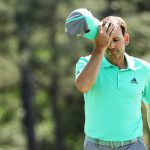 You may also like ‘I made a 13 without missing a shot’: For Sergio and Augusta, the honeymoon ends quickly
Standing on the tee of the short par-4 5th hole (his 14th hole of the day) and needing a strong finishing stretch to make the weekend, Garcia launched his tee shot off-line before whirling and hurling his driver into the bushes sitting next to the tee. After extracting the driver (and taking out some bushes in the process) things only got worse for Garcia: he shanked his second shot, sending the ball skittering low and fast across the green.

Garcia would go on to bogey the hole and finished his round at +2, just outside of the projected cut line. You can see the entire spectacle below:

Won’t be needing this. pic.twitter.com/xbe9abvCjn