WATCH: Pro’s putt for eagle breaks for an incredible 13 seconds 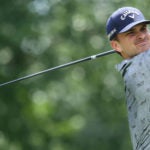 Will Gordon hits a tee shot during Sunday's fourth round of the Travelers Championship.

The putt was about 58 feet. The left-to-right break was about 25 feet. It traveled about 13 seconds.

The pain was 3 inches. The heartbreak was probably a few minutes.

With a chance to draw within a shot of the lead during Sunday’s fourth round of the Travelers Championship, Will Gordon knocked his putt from the top of the green on the par-5 13th hole at TPC River Highlands. It started its roll. CBS’ overhead camera skillfully caught its winding path.

About 5 seconds into his ball’s journey, Gordon began walking. Considering its route, he probably could have caught it. He ended up below the hole. In all, he took 13 steps.

On step 13, the ball stopped just below the hole. On step 13, Gordon slapped his hands together, pumped both arms and then raised them.

He was a split second away from a 63.