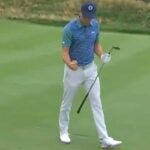 Jordan Spieth pumps his fist after holing out for eagle on Friday.

Jordan Spieth’s putting ranked in the bottom half of the field for Thursday’s opening round of The Northern Trust. But early in his Friday round he hasn’t needed his putter much.

Spieth, who shot a one-over 72 at Liberty National on Thursday, opened his second round with a bogey-par-birdie-par start. He then got to the par-4 5th hole, found the fairway and had 81 yards for his approach. As you probably guessed by now, he holed it. Spieth landed the ball a couple of feet past the pin, it bounced a couple of times and then started trickling back, falling into the cup for an eagle 2 and inducing a huge roar from the gallery.

Pretty good start, right? It got better. On the par-5 6th, Spieth’s second shot came to rest between a hazard line and the rock wall bordering the water. From there, from 85 feet away, he holed it again. Another eagle.

The back-to-back eagles got Spieth to four under on his round and three under for the tournament. Jon Rahm currently leads at 12 under.

The top 70 in the FedEx Cup standings after The Northern Trust head to the second leg of the playoffs, next week’s BMW Championship at Caves Valley Golf Club in Owings Mills, Md.