WATCH: Bryson DeChambeau swings his new Cobra F9 driver as hard as he can

Last week, I had the distinct pleasure of watching Bryson DeChambeau hit a brand-new golf club. Imagine the way you’d feel walking into a store to pick out a new puppy. That’s the vibe DeChambeau gave off as he unsheathed Cobra’s new F9 driver, which was officially announced on Tuesday.

As it turns out, DeChambeau is quite the performer, too. While his PGA Tour game is built around controlling variables, on the range he was far more willing to mess around, try different shots and, eventually, go full send in a long drive contest. He, Lexi Thompson and Rickie Fowler, the three headliners of the Cobra/Puma brand, gathered to show off the new gear. 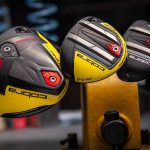 Cobra is stressing “speed” as a prime benefit of their new driver line. So it was only appropriate that DeChambeau gradually began to swing out of his shoes as he chased bigger and bigger numbers on the Trackman.

Check out a few selections from their range demo in the video below, but here are five things I took away:

Bryson’s 25 (and thinks he’s old). “I can’t pull out that big swing anymore,” Bryson says. “I’m 25…but I can feel it.” He then did his darndest to prove himself dead wrong.

Air density? Claude Harmon III chimed in from off-stage. Harmon’s a fairly serious guy, so this is about as close as it gets to joking for him, but it was a crowd-pleaser. “Bryson, are you factoring in the air density?”

Sometimes the Bryson jokes ring a little hollow, but DeChambeau enjoyed this one. “Today? I can…” he replied. “I’ve got it in my bag, do you want it out?”

Lexi bombs it. Even alongside two PGA Tour pros who can smash it, Thompson was not content to be left in the dust. On their first “long drive” tries with the F9, she actually smoked it past DeChambeau, blasting it 290 to his spinny 280. Later, she hit a “stock” seven-iron that carried 172 yards. Yowza!

“Mr. Barometric Pressure.” In the golf world, Rickie Fowler is famously famous, and has been since bursting onto the scene as the Man in Orange nearly a decade ago. But he was more than happy to sit back and take in the show as DeChambeau took center stage — and made sure to give Bryson a little grief.

“Go ahead, let’s see it, Mr. Barometric Pressure,” Fowler shouted down the range as DeChambeau struck a seven-iron. I liked their back-and-forth; for two guys who approach the game in different ways, they keep a nice rapport.

Bryson didn’t want to quit. DeChambeau’s kid-in-a-candy-store vibes continued as the driver portion of the demo wore down. “One more!” he shouted, eager to get to 130 mph swing speed. He never got there, topping out around 125 even as he swung out of his shoes. But that’s more than fast enough — he carried several drives 320 or more.

Check out the video below for a look at Bryson like you may never have seen him before. And learn more about Cobra’s new clubs here.

I spent several glorious minutes watching Bryson hit Cobra's new F9 as hard as he could and it was a BLAST.