WATCH: Backstopping incident on LPGA leads to fist-bump between players

We’ve seen backstopping examples on the PGA Tour, but the latest backstopping incident in pro golf has taken place on the LPGA tour… and it even resulted in a first-bump between the players involved.

Duncan French tweeted a clip from Golf Channel’s second round broadcast of the Honda LPGA Thailand in Chonburi, Thailand, in which Amy Olson and World No. 1 Ariya Jutanugarn are playing the par-5 18th.

In the clip, Jutanugarn chips on to just a couple of feet from the hole, and appears to gesture that she would mark before Olson plays. Jutanugarn takes a few steps toward the green and then stops. Olson, who was off the screen, may have waved Jutanugarn off or been too far into her routine that Jutanugarn didn’t want to interfere — or another reason altogether. Regardless, Jutanugarn has the right to mark if she so chose, but didn’t.

Olson chips on and hits Jutanugarn’s ball, leaving Olson’s ball within two feet of the hole. If her ball hadn’t hit Jutanugarn’s, it would have likely rolled out at least 10 feet or more.

Pro golf has seen backstopping examples before, but what made this one particularly odd was what Olson and Jutanugarn did afterwards. Olson appeared to look at Jutanugarn, put her hands together and playfully bowed in her direction, and they fist-bumped walking up to the green. Both made their putts for birdie.

Even worse with the full video pic.twitter.com/lpras0mF4L

Backstopping is when a player doesn’t mark their ball on the green, intentionally or inadvertently, and another player coming onto the green hits that ball. The player who hit the ball can play from where it lies, often closer to the hole, and the player whose ball was hit can move their ball back without penalty. The practice is fundamentally unfair to the rest of the field.

Rule 15.3a in the Rules of Golf says that in stroke play, “If two or more players agree to leave a ball in place to help any player, and that player then makes a stroke with the helping ball left in place, each player who made the agreement gets the general penalty (two penalty strokes).”

Backstopping was even addressed last month at the Sony Open when Golf Channel analyst Frank Nobilo brought it up during the final round. 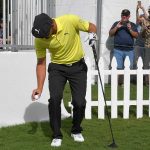 “That’s crazy, it really is,” said Nobilo, when Andrew Putnam decided not to mark his ball before Matt Kuchar played out of a bunker. “You ask any other generation and it’s something that we have chatted about over the years: to provide a backstop, especially at this key moment. [Putnam] had the option to run up there and tap it in, do whatever you want…it’s going to cost someone [in the field].”

Jenny Shin leads the Honda LPGA Thailand at 11 under after two rounds. Olson is tied for fifth and two back, and Jutanugarn is tied for 19th and seven back.

Backstopping became an even bigger talker in pro golf when Jimmy Walker said last summer that, “if you like the guy you might leave it to help on a shot.” That spun into a more in-depth conversation about the topic. Walker later elaborated on his explanation and Luke Donald chimed in via Twitter as well.

Every time I play an event, my goal is to shoot a lower score over 72 holes than everyone else playing, so why on earth would I intentionally help a fellow competitor by not marking my ball!! #backstopping