Want to be a PGA Tour pro? These are the exact hours one puts in 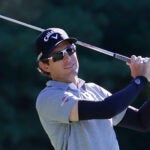 Dylan Frittelli hits a shot during the Northern Trust two weeks ago.

Dylan Frittelli has played 18 tournaments in 2020. He’s played 57 rounds, including one at the canceled Players Championship in mid-March. He’s worked at the office this year.

He’s worked out of the office, too.

Frittelli has clocked in on the range. On the putting green. In the gym. On his mind. In two Instagram story posts on Thursday, Frittelli showed the exact amount of hours he’s put in this year. As a PGA Tour golfer, he’s an independent contractor – or, he’s his own boss. And the boss is keeping an accurate timecard.

“Gotta stay up to date,” he wrote on the first post.

Golf, according to Frittelli’s first set of charts, has taken up just over three-quarters of his 959.3 hours.

Frittelli’s put in 213.8 hours in “physical.” He’s posted several workouts on Instagram this year, including some with Hall of Famer Vijay Singh. Frittelli has also put in 20.4 hours in “mental.” In all, over 36 weeks this year, he’s averaged about 26.4 hours of work per week – which does not include weeks off, travel and other golfer off-the-course responsibilities.

“Approaching 1000 hours of work this year. How many have you done?” Frittelli wrote on the second post.

His second set of charts broke down his percentage of shots.

He’s made just over three-quarters of a million dollars on Tour this year.