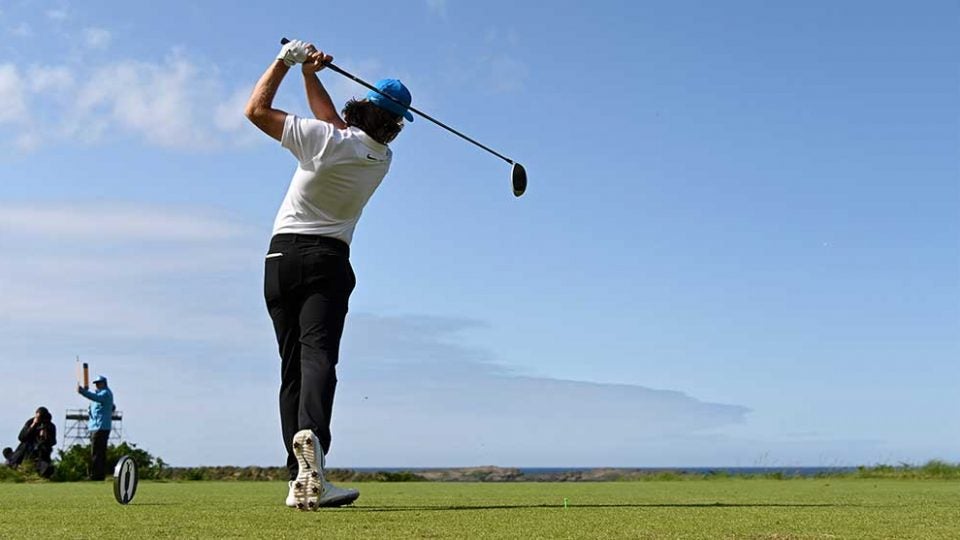 Two is better than one

Tommy Fleetwood likely didn’t realize it at the time, but his recent work with TaylorMade Tour rep Adrian Rietveld on 3-wood in the run-up to the Open Championship had a direct effect on another club in the bag: driver.

Fleetwood’s search for a lower spinning 3-wood led him to shelve Ping G410 LST — a fairway wood he’d been using since the Genesis Open — for TaylorMade M6 at the Irish Open. Testing with Rietveld revealed Fleetwood was better off with a 15-degree head (bent to 14 degrees) with a flatter lie angle and a new Mitsubishi Diamana DF 70 shaft.

The combination of minor tweaks to the head and a different shaft helped Fleetwood lower spin while keeping the launch playable at the same time.

In fact, Fleetwood loved the new 3-wood setup so much, he decided to add the Diamana DF shaft to his driver as well. It’s not uncommon for a player to employ the same model in the driver and 3-wood, but it’s usually the driver that winds up being the impetus behind an across-the-board shaft change.

Tiger Woods’ attempt to bump up the head weight of his putter with lead tape for the slow greens didn’t produce the result he was looking for at the Open. Instead of adding lead tape to the sole as he’s done in the past, Woods placed the weight directly in the cavity of his Scotty Cameron Newport 2 — something that likely allowed him to go up in weight without completely altering the MOI properties of the head.

Judging by Tiger’s practice round, it looks like there won’t be a putter change. Usual NP2 saw action, lead tape still in the cavity. pic.twitter.com/gOl1tnO1I6

Woods also tried a Scotty Cameron Newport 2 prototype with two sole weights, but with more mass positioned in the heel and toe, it’s very likely the 15-time major winner figured it made more sense to roll the dice with his trusty blade instead of going with a completely new wand.

Jordan Spieth wasn’t the only Titleist staffer who added a fresh set of irons at the year’s final major championship. Webb Simpson also switched from 718 MB to 620 MB prototypes (5-PW; True Temper Dynamic Gold Tour Issue X100 shafts) after breaking them in at home in advance of the tournament.

As for Spieth, he became the latest player to give Titleist’s T100 prototypes a shot in competition. According to the equipment manufacturer, Spieth played the biggest role during the development of the T100.

More than two years ago, Titleist’s director of iron development, Marni Ines, began a dialog with Spieth to address his wants and needs when it came to the new iron. 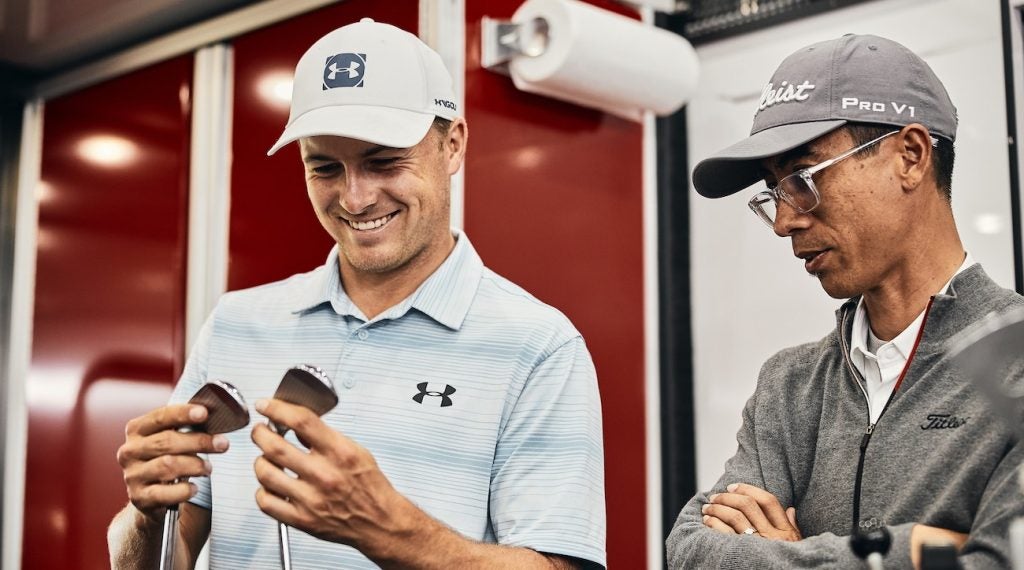 “I remember a couple of years ago when we were talking about my AP2s and the Titleist team asked what I’d like to see improved,” Spieth said. “I told them I preferred the sole being a little bit different and the least amount of offset and top-line as possible.”

After going back and forth with Ines and Titleist Tour rep J.J VanWezenbeeck, Spieth received his first look at the final T100 prototype during the week of the Memorial and broke them in leading up to the year’s final major championship.

Bryson DeChambeau shook up his wedge setup at Portrush by adding three PXG 0311 Forged wedges (50-12, 56-14 and 60-12 degrees) to the bag. DeChambeau reportedly played golf recently with a friend who had the wedges and liked them enough to pick up a set for testing. The Forged head was the first wedge PXG introduced back in 2015. These days, the company’s Milled version is their most popular offering on the PGA Tour.

Luck of the Irish

Shane Lowry didn’t need luck on his side to win the Open Championship. But that didn’t stop him from having a custom shamrock SuperStroke grip made for his Odyssey Stroke Lab EXO 2-Ball putter. The Traxion Pistol GT 1.0 has shamrocks dotting a section of the grip. For the moment, it remains a Tour-only option.

As expected, utility irons were plentiful at the Open Championship. TaylorMade chose to roll out a P790 UDI prototype that was used by, among others, Justin Rose, Dustin Johnson and Hideki Matsuyama. It was also spotted in the hands of Tiger Woods during a practice round. 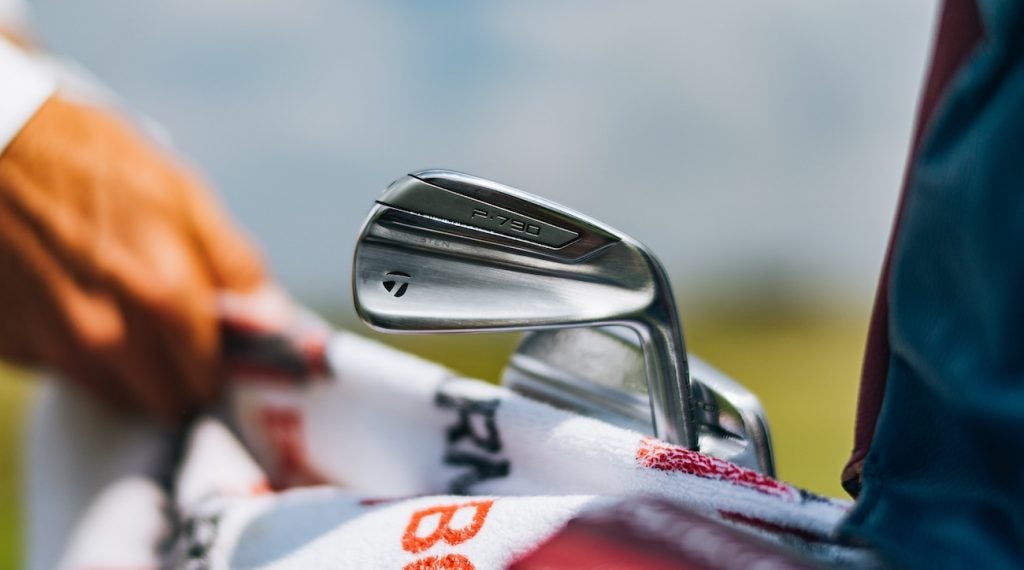 The club looks very similar to the previous version released a few years ago. As far as noticeable changes are concerned: the TaylorMade script on the toe was replaced by a simple badge, and a black screw is now found in the toe instead of the silver screw on the previous version. The overall shaping of the muscle pad was also altered slightly with a straighter line running down the middle.

Unpredictable weather and Portrush’s demanding layout forced players to reconsider their equipment setups. Tony Finau chose to concentrate on changes at the top of the bag, replacing his 17.5-degree Ping G410 5-wood with a lower-lofted 14.5-degree to keep the ball under the wind. To give himself another option off the tee, he also added a course-dependent Blueprint 2-iron.

Matt Kuchar was one of a handful of players who added fresh wedges for Portrush. Low bounce lob wedges turned out to be a popular option as players attempted to find something that could pick the ball clean from the turf. Before last week, Kuchar’s lob wedge of choice was Callaway’s Mack Daddy PM Grind.

Adam Scott went through two putters in Northern Ireland before ultimately missing the cut. One of the putters was a conventional-length Scotty Cameron Newport 2 that closely resembles the popular Studio Stainless version released years ago. Before Studio Stainless made its way to retail — it can be had for less than $200 on some auction sites — Cameron first introduced the putter on Tour in a high-end German Stainless Steel material. Scott eventually went back to the broomstick putter for the second round.