Welcome to Wall-to-Wall Equipment, the Monday morning gear wrap-up in which GOLF equipment editor Jonathan Wall takes you through the latest trends, rumors and breaking news. This week, that includes Rickie Fowler’s irons shafts, Ryan Moore’s putter and much more.

Equipment changes on the eve of the Masters tend to get magnified, even more so when the player making the adjustment is one of golf’s marquee names. In his final tune-up before heading to Augusta National, Rickie Fowler swapped out the shafts in his irons, replacing the KBS Tour C-Taper S+ 125 he’s used since 2015 with True Temper’s Dynamic Gold Tour Issue S400 (soft-stepped) — the same profile he’s currently using in his wedges.

Working with Cobra Tour rep Ben Schomin on Tuesday, Fowler tested six 7 irons with different shafts on the practice range in search of more spin. About midway through the testing bonanza, Schomin had club technician James Posey build up a 7-iron with S400. Based on the numbers, ball flight and Fowler’s feedback, S400 turned out to be the best option.

Fowler’s spin rate increased a couple hundred RPM’s, without sacrificing dispersion, while the launch angle went down by only one degree. The shaft also felt more responsive, due to the slightly softer profile.

“I just wanted to see if I could get a little more spin but similar flight, and that’s why we ended up with the S400, which is the same shaft I play in my wedges,” Fowler said. “It’s not a big stretch. It’s been a shaft that’s been around for a long time. Yeah, so far it’s been good, I’m happy with how it’s going. Not saying there won’t be more testing down the road, but I’m happy with how it’s worked.”

Interesting change ahead of the Masters as Rickie Fowler swaps KBS Tour C-Taper 125 S+ for True Temper Dynamic Golf Tour Issue S400 in his irons. Was already an S400 guy in the wedges. pic.twitter.com/OQp7WfB3i7

Fowler hasn’t shied away from significant equipment changes this season. Back in January, he transitioned from Titleist’s Pro V1 into TaylorMade’s TP5x golf ball, known for its low-spin characteristics, and won almost immediately after the switch at the Waste Management Phoenix Open. Similar to the ball change, Fowler felt it was time to shake things up and go in a different direction with his iron setup.

“I thought it was a good time to [change],” Fowler said. “… It all comes down to what you’re looking for. Some [shafts] feel just a little bit different. Some are going to be a little bit more rigid, some are going to be a little bit softer. Ultimately we have a great setup. I’ve been loving the new ball with TaylorMade. We got the win earlier this year in Phoenix, so everything works. You’re always trying to get better, you’re always trying to see if there’s any spots in the equipment world where things could be better.”

Fowler’s fresh iron build produced a solid week of work at TPC San Antonio, where he finished T17 while ranking T22 in greens in regulation (68 percent) and 29th in strokes gained: approach-the-green.

Laguna Beach, California is one of the prettiest locales on the planet. It also happens to be the name of a Scotty Cameron putter model that was popularized by Brad Faxon — arguably one of the greatest putters in golf history — The shaping and flow, particularly the sculpted flange, of Cameron’s Laguna is unmistakable. The look was enough to get Ryan Moore’s attention, who recently switched to a Laguna with a GSS inlay. 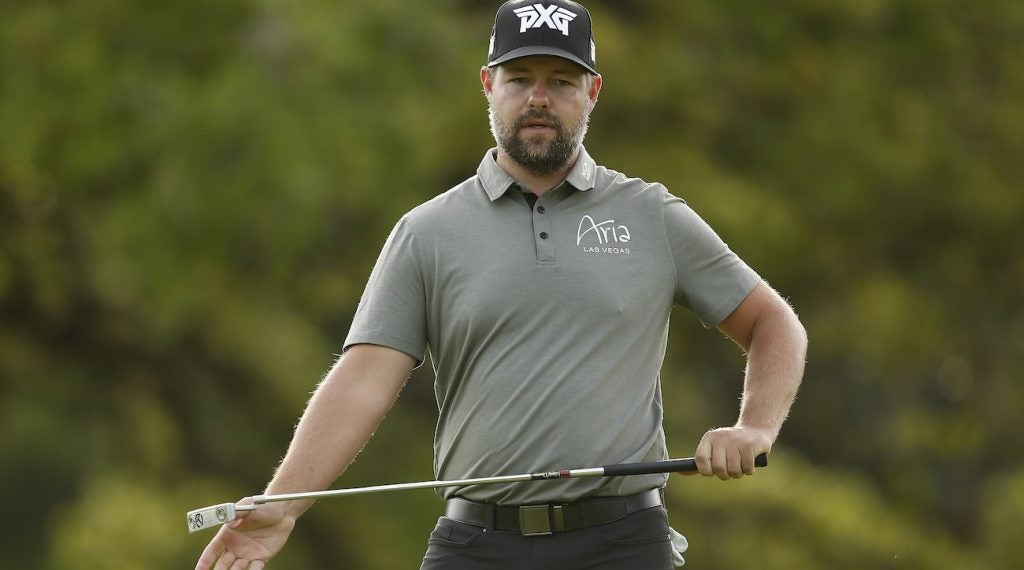 Moore, who finished T3, has been through numerous putters this season. The latest change produced the kind of results — 9th in strokes gained: putting — that should have him hopeful about his chances heading into the Masters.

If there’s one thing you can learn from Billy Horschel’s recent driver change, it’s that you should always buy the club you’re testing. Horschel recently switched to UST Mamiya’s The Attas driver shaft during the WGC-Dell Technologies Match Play and liked it enough to have a backup built.

While there’s nothing different about Horschel’s PXG 0811X Gen2 gamer driver and backup, from a visual standpoint, the backup outperformed the gamer during testing, which led the former season-long FedEx Cup champion to change the batting order.

.@BillyHo_Golf using @USTMamiya The Attas 6TX shaft in his @pxg 0811X driver this week. Dubbed it “The Skittles” shaft due to the crazy colors. Seeing slight uptick in spin (12/2400 range) due to the shaft, 3/4 of a degree more loft. pic.twitter.com/tbdED5ILuN

No matter how hard equipment manufacturers try, it’s impossible to build an identical driver. Production tolerances being what they are, it’s very likely Horschel got a driver build with a bit more oomph. It happens from time to time — even on the PGA Tour.

Jimmy Walker was the first Titleist staffer to give the company’s smaller profile TS4 driver a spin on Monday at the Valero Texas Open, but it was Max Homa and Adam Svensson who chose to pull the trigger and use it in competition. Homa ranked third in driving distance (317.7 yards) with the new driver that features a 430cc head — 30 ccs smaller than most of today’s drivers — and low spin characteristics (300-400 RPM’s less than TS2 and TS3).

Jimmy Walker is the first to get his hands on @Titleist‘s TS4 this week. Some in-hand photos of the driver he’s testing. pic.twitter.com/rylK5u64wk

“Max (Homa) immediately liked the size and shape of the TS4 (9.5), and his high launch and high club speed made him a perfect candidate for this driver,” said Titleist Tour rep Larry Silveira. “After nine holes of his first practice round, Max let us know that the spin reduction was very positive and he would be putting in play.”

Due to the smaller pear-shaped profile, it’s very likely TS4 won’t have a similar usage rate to TS2 or TS3.