Welcome to Wall-to-Wall Equipment, the Monday morning gear wrap-up in which GOLF equipment editor Jonathan Wall takes you through the latest trends, rumors and breaking news. This week, that includes Jordan Spieth giving his old driver shaft the heave-ho, Tony Finau’s productive putting session, and why Rickie Fowler made a minor tweak to his flatstick.

With Jordan Spieth’s putter rounding back into red-hot form ahead of the U.S. Open, the Texan chose to tackle another area of his game that’s held him back at times this season: the driver. Content to stick with Titleist’s TS3 head, Spieth spent the early portion of the week undergoing testing with Titleist Tour rep J.J. Van Wezenbeeck to dial in the performance of his driver shaft to match the swing changes he’s currently implementing.

“On Tuesday, Jordan’s instructor Cameron McCormick and Titleist’s PGA Tour staff, together decided on adding more stability in the tip of Jordan’s driver shaft,” Van Wezenbeeck said. “Jordan had gained speed as a result of some swing changes they were working on.”

With center face impact location and directional control ranking as the top priorities, Spieth had several shaft options built to test. The increased tip stiffness of Fujikura’s Ventus 6X moved Spieth’s toe impact locations closer to the center face with similar ball speed (170-172 mph), but the misses were much improved, prompting the switch.

Spieth played nine holes with the driver on Wednesday before deciding to put it into competition on Thursday. Spieth kept the same SureFit setting at D-1 with 10.5 degrees of loft. 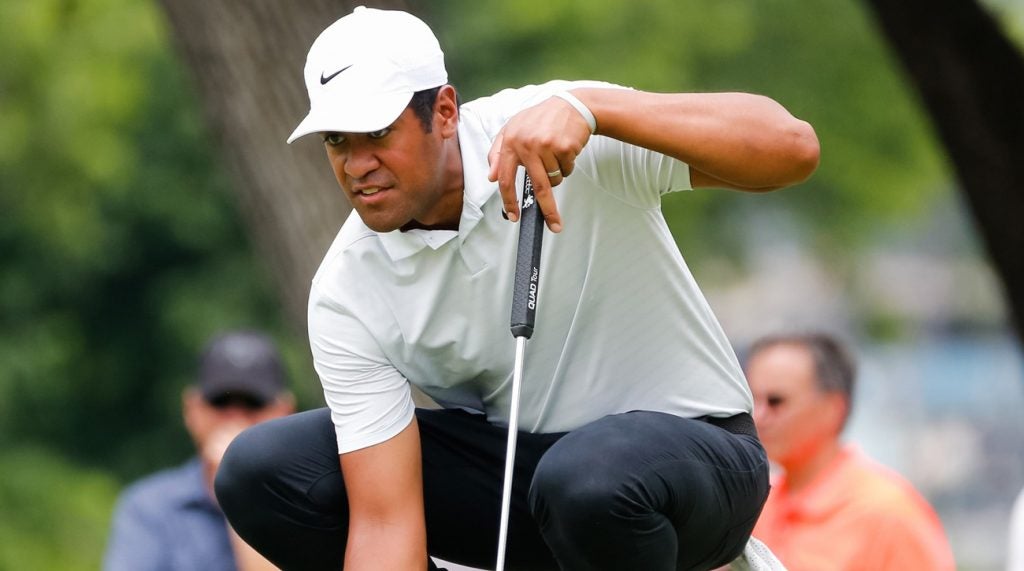 Tony Finau with his putter at Colonial this week.
USA Today Sports

After finishing no better than T60 in his last three starts following a T5 at the Masters, Tony Finau made some changes to the putter at Colonial, adjusting his grip and putter specs during a lengthy practice session with Piretti Golf’s Michael Johnson and Garsen Golf’s Bernie Garsen. The work produced Finau’s best week on the greens this season.

Prior to Colonial, Finau ranked 100th in strokes gained: putting for the season on the PGA Tour. Dig a little deeper into the stats and one thing becomes apparent: He’s struggled mightily from inside 10 feet, ranking 200th on Tour from 4-8 feet and 197th from inside 10 feet — two putting ranges that are absolutely critical for success. Move out an additional five feet (10-15 foot range) and Finau suddenly improves to 43rd.

One of the first changes Finau made was a switch to the claw grip from putts inside 25 feet.

“I practiced putting with the claw a lot just to put my left hand in a good position,” Finau said. “I’m left hand dominant when I roll the stick. I used to putt cross-handed for about five years; been putting conventionally now for a couple of years.

Tony Finau made some significant changes to the putter — and they’re already paying off. https://t.co/ib2NxJuXaW pic.twitter.com/GQIimzlkk7

“But I just wanted to switch it up. I haven’t been putting great I feel like, and standing over the ball the most important thing is do you feel like you’re going to make the putt or not. Outside of everything else, do you believe you can make the putt?”

Along with switching up the grip on shorter putts, Finau made a drastic change to the overall weight of his putter, shedding a massive amount of beef from the grip alone. With his previous Piretti Matera Elite putter, Finau opted for a 150-gram Piretti Jumbo grip with a mammoth counterweight to offset the 375-gram head. But during testing, Finau started to notice he was gripping the putter too tight to control it with the extra weight, especially on short putts.

So he went to a significantly lighter, non-tapered Piretti-Garsen Quad Tour grip that came in at 55 grams, nearly 100 grams less than his previous putter grip. Finau had Johnson drop the overall head weight to 345 grams, giving the entire putter a more conventional feel. The putter was also shortened from 36 to 35 inches but the loft remained at 5 degrees.

If you don’t already know the rest, it’s a story with a happy ending: Finau gained 4.72 strokes on the field with his putter, good for ninth in the tournament. And he canned a birdie putt on the 72nd hole to finish solo second. 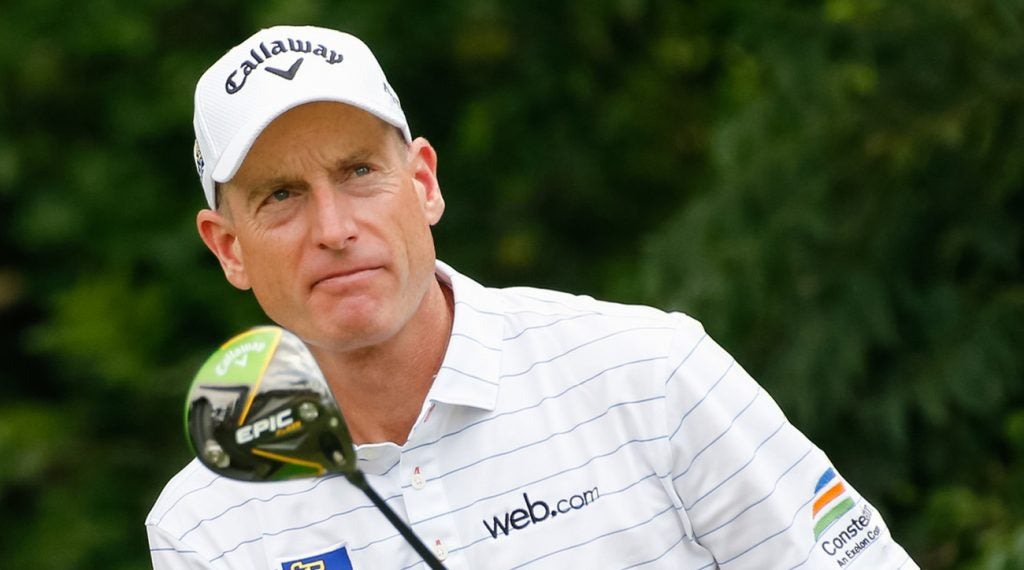 Jim Furyk with his driver at the Colonial this week.
USA Today Sports

The rich get richer

Despite ranking 208th in driving distance, Jim Furyk has remained relevant with a highly reliable driver (1st in driving accuracy) and scoring average (69.873) that ranks 15th on the PGA Tour. Up until Colonial, Furyk had risen to the summit in driving accuracy with Fujikura’s Motore Speeder 6.2X shaft in his Callaway Epic Flash driver.

But stability was still an area Furyk wanted to improve. Working with Fujikura Tour rep Pat McCoy, Furyk found a suitable replacement in Speeder TR 661. With a slightly longer shaft length (45.5 inches versus 45 inches), he was able to produce more consistent face impact.

Going down … and then up

Francesco Molinari found a tighter dispersion and more consistent launch conditions by making one adjustment to his 3-wood. Since the Italian joined Callaway in March, his 3-wood of choice was a 15-degree Epic Flash Sub Zero with the loft sleeve in the -1 setting.

According to Johnny Thompson, Callaway’s Tour rep, even in the lower setting, the club was still more upright than Molinari preferred. Thompson found Molinari a more suitable option by going down in loft to the 13.5-degree head and bumping the loft up 1 degree.

“The 13.5 head has a flatter lie angle, even when you add loft,” Thompson said. “We made the adjustment and he was immediately striking it better with a tighter dispersion. When we first started working with the 15-degree head, he’d catch one off the center and then next would be a little more off the toe. The flatter lie angle cleared up the misses almost immediately.”

Rickie Fowler felt there was something off with his Scotty Cameron Newport 2 GSS putter. The face looked closed at address when Fowler soled the putter head, but he wasn’t sure if he was seeing things. Fowler had Scotty Cameron Tour rep Drew Page take a look at the putter, and it didn’t take him more than a few seconds to notice the bend in the plumber’s neck was not completely flat along the front.

“The metal is so soft that it can bend the neck over time and become crooked,” he said. “Just happens. It’s not super noticeable, but through general wear and tear or leaning on it, it can happen. It’s really subtle, but if you know what you’re looking for, you can see it. It took a couple of tweaks but we got it there.”

Page adjusted loft, lie and repositioned the neck to achieve a look that was pleasing to Fowler’s eye (in the address position) while removing the shut face. 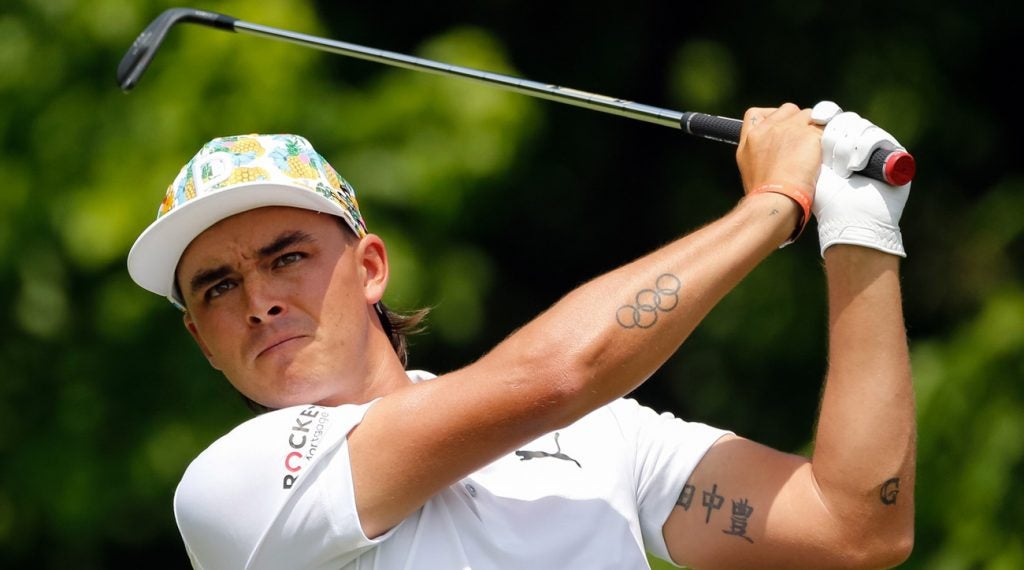 The air up there

Scott Langley made an unconventional equipment change at Colonial, replacing his PXG 0311T 5-iron with a 28-degree 0317 X Gen2 hybrid. According to Matt Rollins, PXG’s Tour rep, Langley was looking for a higher launch and found the hybrid to be a worthy replacement. “Scott’s getting the launch he wanted without sacrificing accuracy,” Rollins said.