The wind is so strong at the Walker Cup, shots are going backward 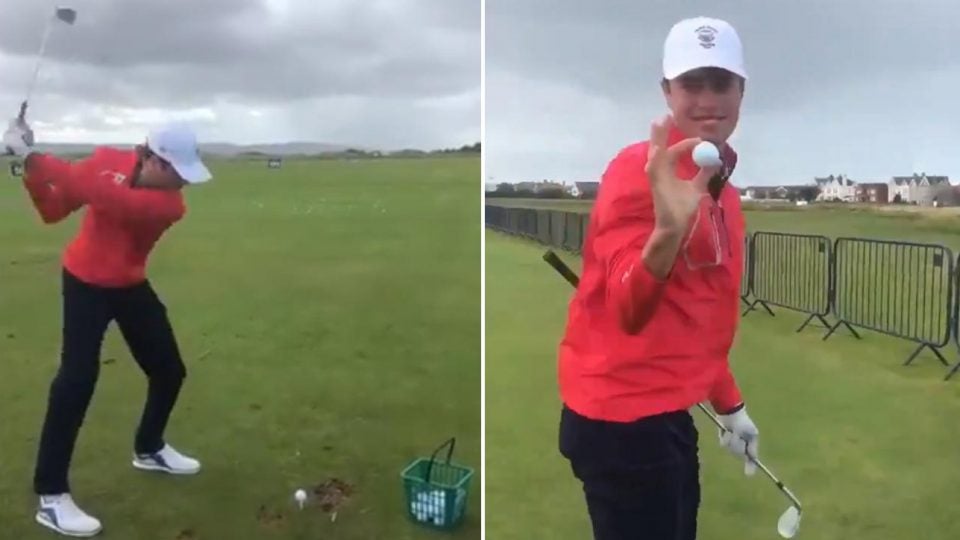 On Friday, the day before the competition begins, Hammer went out to the range at Royal Liverpool to film an experiment. He wanted to see if he the wind was bad enough to blow a normal forward shot backward.

News
Why is Bing Crosby’s son the Walker Cup captain?

In a video posted to Twitter, Hammer tees up his golf ball to a healthy height. Then, with what appears to be a wedge in his hand, the accomplished amateur takes a full swing. As the camera turns to film down the range, Hammer looks up and reaches his arm into the sky.

Just then, his ball comes looping back into the frame, heading straight toward the star amateur. Hammer then tries to catch it, but it falls in front of him and bounces with considerable speed toward his open hand.

Check out the mind-bending shot below.

As you can see, Hammer picks up the ball before it stops. Had he let it go, it’s clear that it would have continued on its destined path and finished well behind the tee location.

Of course, high winds at Royal Liverpool are par for the course, if you will. As is the case with many links courses, the iconic venue, which has hosted 12 Open Championships, depends upon bad weather to defend itself against the best players in the game. And in case you had any doubt, this year’s Walker Cup teams are full of accomplished players on the cusp of the pro ranks.

The Walker Cup, which occurs every two years, is styled like the Ryder Cup, with two teams competing in match play formats. On one side is the U.S. team, made up of 10 of the best amateur golfers from the United States. The other team is made up of 10 top amateurs from Great Britain and Ireland.

But Hammer might be better than all of them. Currently the No. 1-ranked amateur in the world, Hammer qualified for the 2015 U.S. Open at Chambers Bay at just 15 years old. This summer, the Texas Longhorns star was the stroke-play medalist at the U.S. Amateur, eventually losing in the match play portion of the prestigious event.

The wind players were faced with on Friday at Royal Liverpool was so strong, even the best PGA Tour pros would’ve struggle to score. Fortunately, the players and fans at the Walker Cup are about to experience a dramatic change in weather.

On Saturday, the intense winds are expected to slow down to a very manageable 10 mph. For the second day of competition, players will face little more than a breeze (3-6 mph) and will be treated to dry, partly cloudy skies.

Rules
Rules Guy: What do I do if my wind-blown towel stops my ball on the green?

If U.S. captain Nathaniel Crosby’s team is going to defend their 2017 Cup title on foreign soil, a rarity recently in Walker Cup play, they will have to do so in fair conditions in what could become a birdie fest.

For those who want to tune in to watch what is sure to be a thrilling weekend of golf on an iconic course, you’re out of luck. Fox aired 12 hours of the 2017 Walker Cup, but this year there is no live broadcast on either side of the pond. Instead, viewers will have to get their fill with one-hour highlight shows via the Golf Channel in the U.S. and Sky Sports in the U.K.