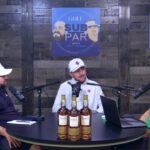 On this week’s episode of GOLF’s Subpar, former NBA player and coach Vinny Del Negro joins former PGA Tour pro Colt Knost and jicky jack legend Drew Stoltz for an exclusive interview. The winner of the 2021 American Century Championship talks being the first basketball player to win the event, what he learned from playing with Annika Sorenstam this year, and who the best golfers are among current and former NBA stars.