Viktor Hovland shares video of his ‘sh—y’ old golf swing (can you spot the differences?)

After a season that included Low Amateur honors at both the 2019 Masters and 2019 U.S. Open — finishing T12 on that occasion — Viktor Hovland turned pro and is now officially a PGA Tour player, thanks to his second place finish at the Albertsons Boise Open during the Korn Ferry Tour finals.

On Monday, doing a little Instagram celebrating of his new status, the 21 year-old Norwegian shared an old video of his golf swing (which he called “Sh—y”) showing how far he’s come.

It’s not that bad, Viktor. But I get why he’s saying it. It’s quite remarkable how much his golf swing has changed in a relatively short period of time. It’s a testament to the hard work Hovland and his coach, Denny Lucas, have put in over the years — and they’re certainly reaping the rewards right now.

Let’s break it down, using that swing alongside a video I snapped at the U.S. Open earlier this year.

Viktor Hovland, then and now pic.twitter.com/rVpnTUiIWv

Immediately you start to see the differences. Young Hovland on the left starts his swing by rolling the clubface open and inside on the takeaway — something that could lead to a big slice if he doesn’t compensate for it later in his swing.

The clubface is more shut nowadays, with the shaft running directly on his hands. With the clubface in a more stable position, he doesn’t create any problems he’ll need to compensate for later on. 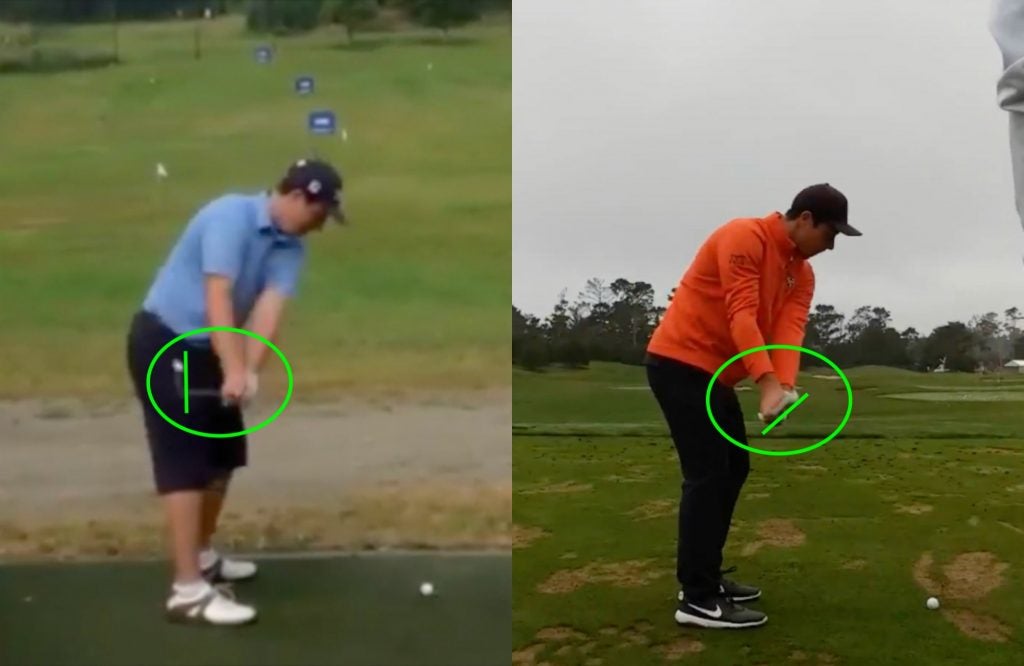 This side-by-side is perhaps the best example of how much Hovland’s swing has changed.

Hovland’s arms and hands are a lot higher and less around his body than they used to be. He can turn more effectively in his backswing as a result (something he’s talked about working on), and the club is less across the line. Rather than working hard to prevent the club from getting stuck behind his body, Hovland can now turn more on the backswing, then shallow the club and swing through for maximum power. 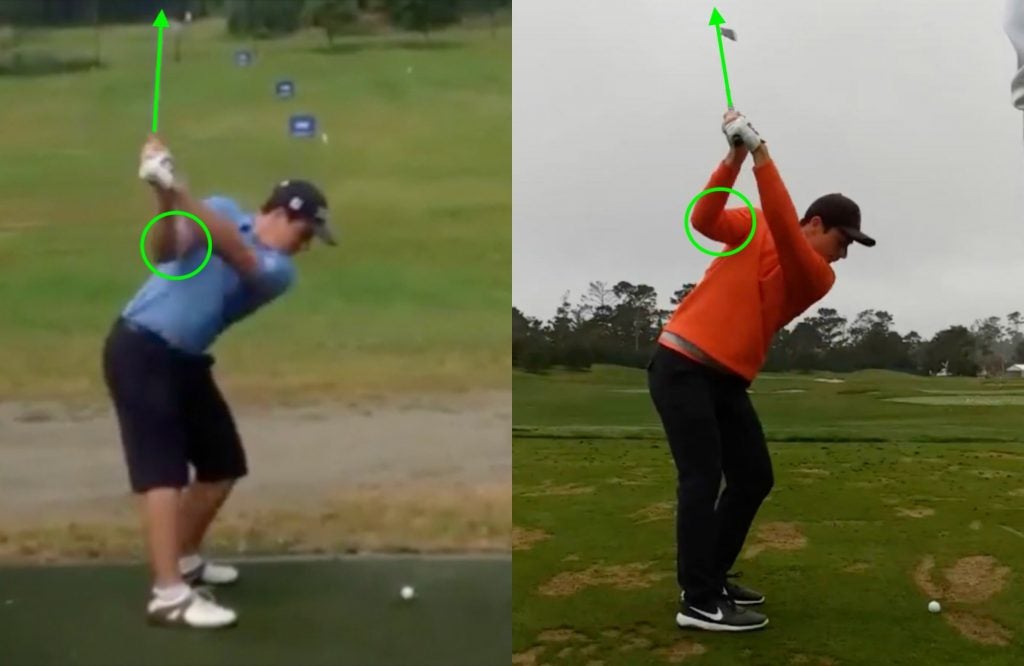 Remember Hovland’s new-and-improved takeaway? Well, this is why it was so important. The toe of the clubface coming into impact is pointing to the sky; a similar spot to where it was on his backswing. With the clubface that open, Hovland used to have to rely on timing with his hands to get it back to square in the few milliseconds he has left before he hits the golf ball.

Now, Hovland’s clubface is pointing more towards the ground — similar to Dustin Johnson’s. Instead of needing to roll his wrists to try to square the face, all Hovland has to do now is turn through with his body. 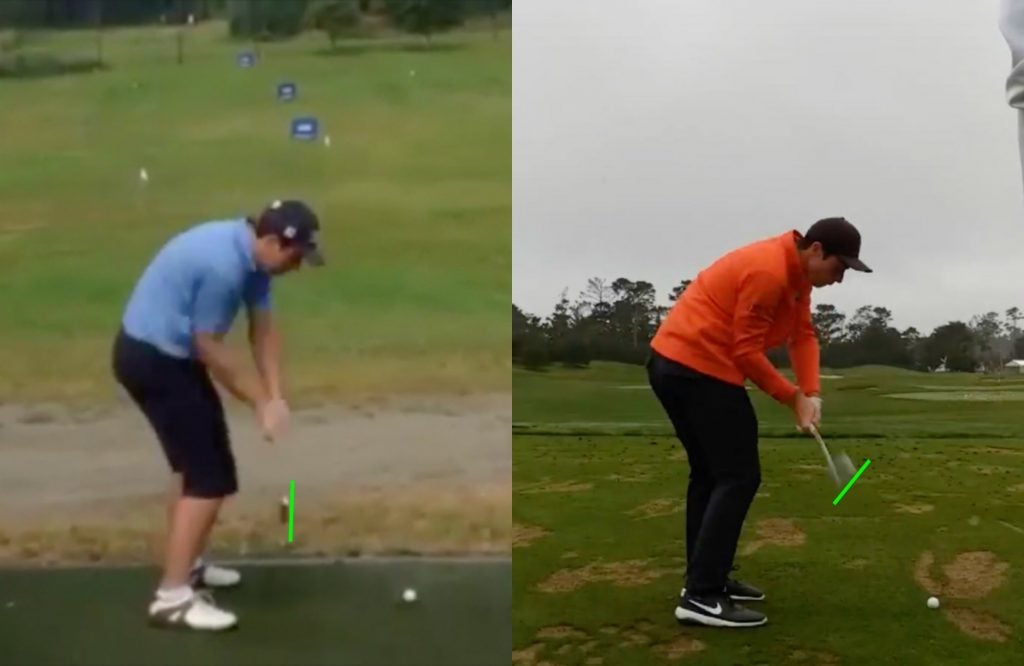 Because of that open clubface in the frame before, young Viktor Hovland used to stall his body and flip his hands to square the face. Just look at how much more has wrists have rolled over on the left. You can’t even see the logo on his left glove anymore, unlike in the frame on the right. It was a move that costs him power and accuracy, because it’s so hard to time.

Modern-day Hovland doesn’t have that problem. There’s less wrist roll, so the clubface is more stable throughout. He turns more aggressively with his upper body, which you can see helps with his weight shift. It’s why he’s more off his right foot after impact nowadays and his right shoulder is turned more towards to the target.

Hovland and Lucas have built a more powerful, more effective swing, and one we’ll be watching on the PGA Tour for years to come. 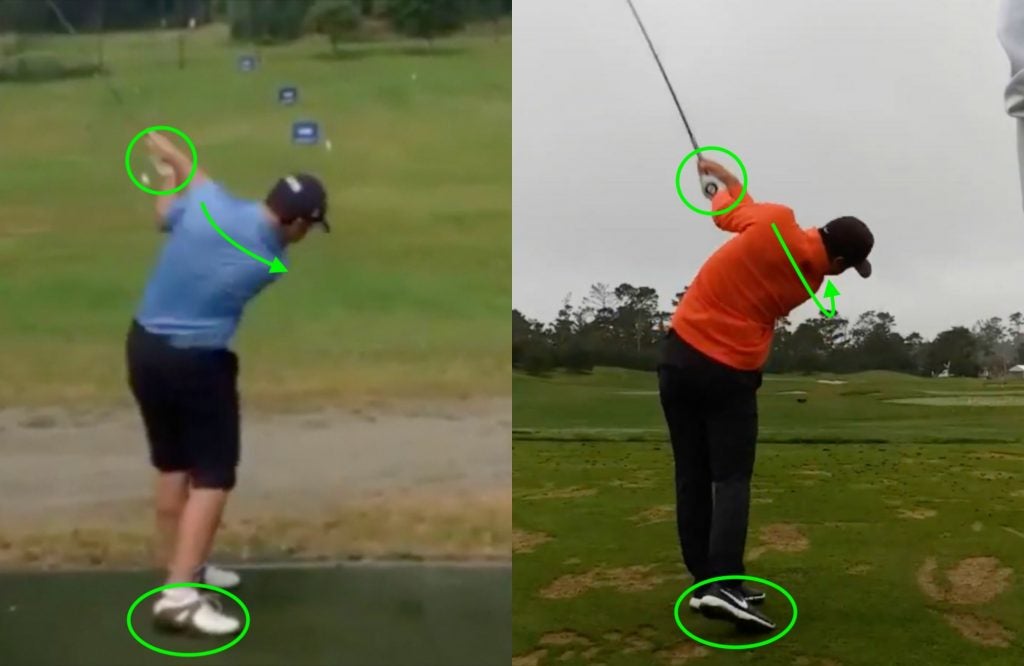